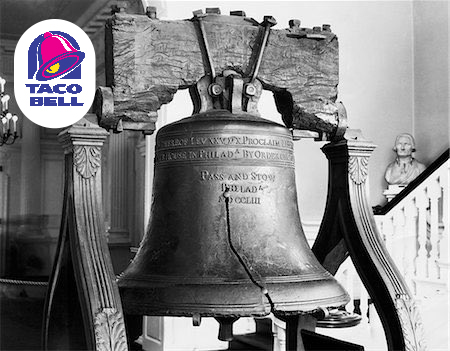 Taco Bell – an American-based chain of popular fast-food restaurants which generates about $2 billion in annual revenue.

On April Fools’ Day in 1996, the company announced that it had taken over the Liberty Bell. They also said they would change its name to “Taco Liberty Bell,” and that it would remain available for public viewing. Rapid media coverage gave the whole campaign an extreme reach, with 70M viewers and $25M in free publicity.

The thing worked well, but it was all but a hoax. People were shocked that Taco Bell made them believe it was true. April Fools’ Day made for an excellent occasion for such marketing stunts, and Taco Bell used that opportunity.

Taco Liberty Bell ad, or rather an announcement, appeared in a bunch of the biggest US newspapers. The text sounded serious and official. Except for how strange it was, there was no actual reason not to believe it. It was very professional. 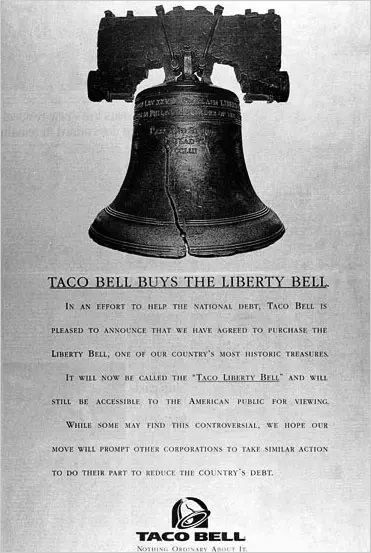 There were no social media back in the 1990s. Giants like Facebook and Instagram launched only after 2000. When Taco Bell prank went viral, there was only a press, a TV, and a radio. It was enough to generate a large reach. Taco Liberty Bell hoax impacted around 70 million people, and it was mainly because of TV shows and radio programs.

The idea for the Taco Liberty Bell hoax on April Fools’ Day in 1996 was the invention of the Paine & Associates PR agency. Taco Bell hired David Paine and his team sometime before that day. Paine’s goal was to plan a successful marketing campaign for Taco Bell that would go viral.

The agency has had a few years of experience in PR, since it was founded by Craig Paine in 1990.

The Taco Liberty Bell hoax has also risen some controversies. The Liberty Bell is an important national symbol for a lot of Americans. Making jokes about it was seen as something inappropriate by some viewers.

The reaction to the Taco Bell prank was so intense that the National Park Service had to call the press to make an official statement that the bell was never to be sold.

The struggle around the campaign turned out to be pretty worth it. Taco Bell spent about $300,000 (about $200,000 went to Paine & Associates). But, the return was larger than that. Paine estimated that Taco Bell has earned about $25M in free publicity.

The Taco Bell newspaper ad would never be issued if it hadn’t been for the timing. The ads arrived on March 30 in the newspapers' ad departments. There was no time to analyze them, and the issues for April were already full. They were just pushed through to printing.

The cherry on the cake was paying $50,000 by Taco Bell for the upkeep of the Liberty Bell. It wasn't much, but it helped the company to save face.
Good timing

Taco Bell said that they wanted to pay the national debt by purchasing the Liberty Bell. Marketing campaigns with such noble goals are usually highly successful.

People like it when somebody promises to do something they find important. Paying the national debt would be with the benefit for all Americans.

We remember strange things better. The weirder is a marketing campaign, the higher the chance that many of its viewers would remember the brand.

Not many things are as strange as buying the Liberty Bell by a chain of fast-food restaurants. Taco Bell shocked people even more also because they said that they planned to change the name of the Liberty Bell.

The Liberty Bell is an important national symbol for a lot of Americans. People felt bad about such a symbol being purchased by some fast-food restaurants brand. The controversies around the hoax came from people’s negative reactions to the idea. Some thought that it was somehow immoral.

Even after it was all explained by Taco Bell and the National Park Service, people were still saying that it was wrong to make pranks with the important national symbol of freedom.

The entire viral marketing campaign might have not been so viral at all. People remembered the Taco Bell prank because it started with a stomp (a number of newspaper ads), and finished with a neat accent (Taco Bell’s promise to pay $50,000 for the Liberty Bell’s upkeep).

Taco Bell has simply made use of the April Fools’ Day. They mixed some sense of humor with an effective press advertisement. Good timing played an important role there.

Making good use of holidays and special occasions can bring large returns pretty fast. Also, Paine & Associates were very effective. The campaign was neatly planned before day zero. They knew that newspapers won’t bother checking all the advertisements. There was no time for that, a day before the release of the issue. That was a clever move.