Reddit’s r/Place – a global Reddit social experiment that has been organized twice so far. It’s always on April Fools’ Day.

The first event was in 2017. It lasted for 72 hours and made over 1 M users put 16 million distinct pixels.

The 2022 version saw more than 10 million people collaborating in placing a total of more than 160 million pixels throughout about 83 hours. 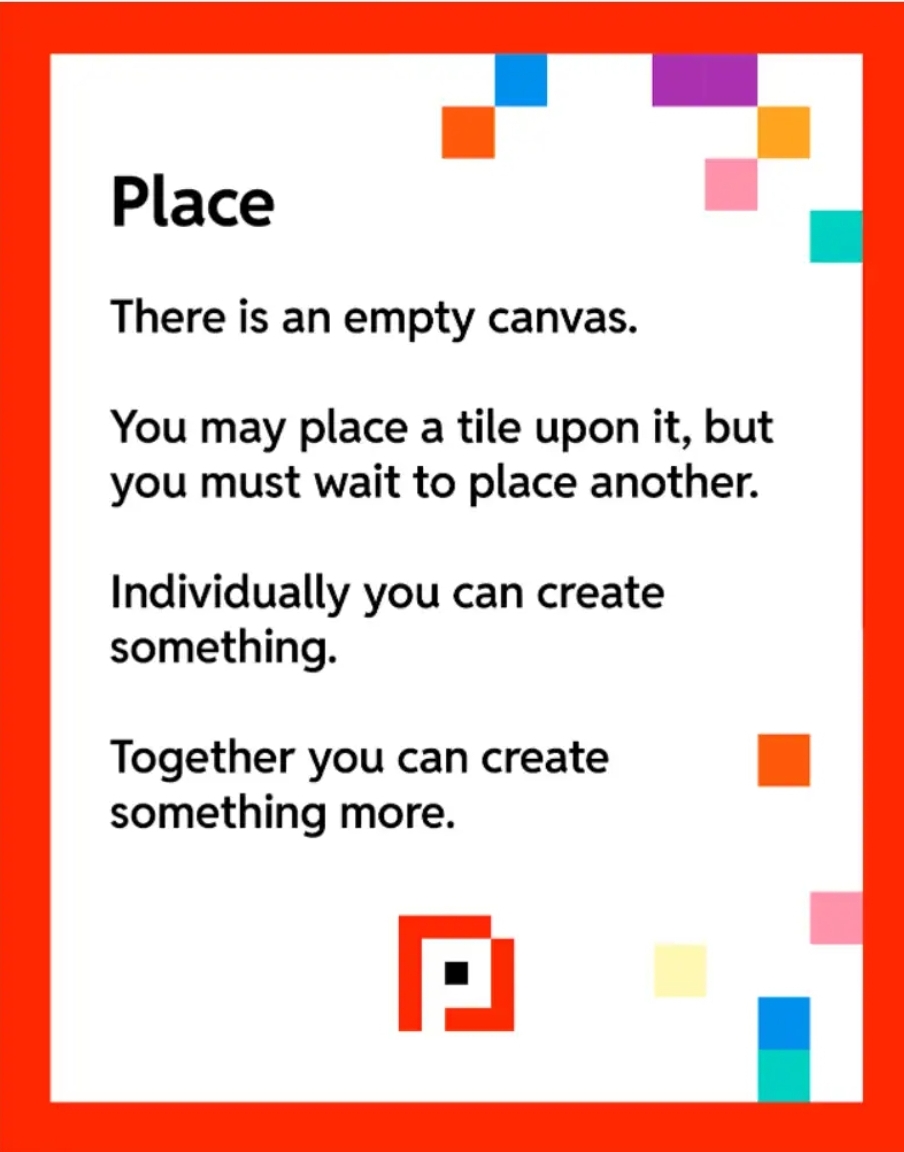 Reddit social experiment 2017, which was the original r/Place, was created by Josh Wardle. The same person had made Wordle, a popular, web-based word game.

More than 1 million people engaged in placing colorful pixels on the r/Place canva available through a web browser. There was a time limit for each user. Once you’ve changed the color of the chosen pixel, you needed to wait between 5 and 20 minutes to make another change. It made it difficult for a single user to create larger projects in r/Place and encouraged cooperation.

r/Place got its second life on April 1, 2022. Now the numbers were larger than 5 years earlier. A total of more than 10 million redditors took part in the event (ten times the results from the 2017 version). They placed more than 160 million pixels on the canva.

A screenshot of the Internet

When Josh Wardle saw the final state of the canva of the original r/Place, he called it “a screenshot of the Internet.” He meant that the variety of things redditors had created during that Reddit social experiment showed how many distinct cultures and communities clash on the Internet.

A few streamers made their audiences participate in the “war” for r/Place domination.

Another Twitch streamer participating in the r/Place battle was Mizkif. He tweeted about the Reddit social experiment as a unique experience on April 3, 2022.

What is the point of r/Place?

r/Place was simply a Reddit social experiment. It was launched on April Fools' Day to give the redditors some fun, and maybe also to bring new people to the platform.

The aim of those events is to show the collaborative power of the Internet. It has also shown the variety of subreddits that have taken part in the experiment.

Soon after the end of the second r/Place, some people tried to sell parts of the collaborative work as separate NFTs.

The redditors who had taken part in coloring the canva have found it a theft. The images created there may be called a common property, but no actual creators can be pointed out. That's why the topic is vague and difficult.

An r/Place pixel image of Gol D Roger, a pirate captain from the One Piece anime, has been put up for sale for about $300 on OpenSea. 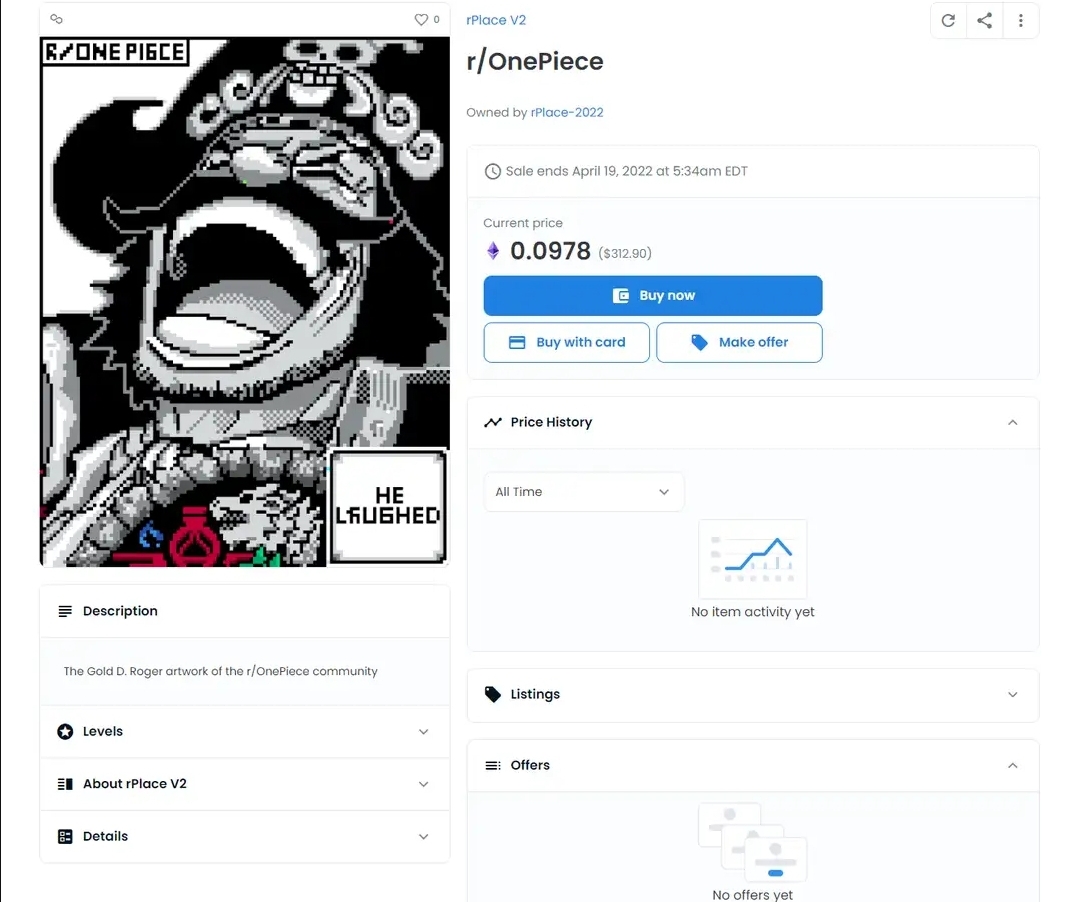 The dark side of r/Place was the usage of bots. It was discovered by xQc while he was trying to take over the Turkish flag on the canva.

The streamer began the analysis and found out that a bunch of the most active r/Place redditors were actually accounts created just before the event. What's more, they followed similar patterns in terms of their behavior on r/Place, and they also had schematic names. All of that let xQc and his fans think that the Reddit social experiment got swarmed by machines.

That would also explain the large difference in numbers between the Reddit social experiment 2017 and 2022.

The more people do something, the more newcomers want to jump in and join them. r/Place was successful because Reddit has a large user base. Redditors are divided into several communities, and many communities argue with one another quite often.

Competitiveness is our desire to fight and win. r/Place was a great occasion for many subreddits to manifest themselves and prove their “dominance” over the others.

Many streamers also engaged in the fun and brought their viewers to take part in r/Place. People’s desire to prove their stand was so intense that some of them have programmed special r/Place bots to place pixels at regular times.

We appreciate something more if we can create it ourselves. People feel things belong to them “more” if they can put their effort in making/creating them.

r/Place was a big Reddit social experiment. The final state of the canva was the joint effort of a lot of redditors from various subreddits. People felt great attachment to those parts of the canva they took part in.

Fear of missing out (FOMO) is the human need to be up to date with the important information. We are often afraid that something important will go unnoticed by us.

At its peak, r/Place 2022 saw nearly 6 million pixels changed per hour on the canva by 1.7 million redditors. It means that people didn't want to lose a single minute from the time limit they had to place those pixels. Longer hesitation meant more time for the others to act.

Redditors were curious about the new Reddit social experiment 2017 when it appeared. It was something out of the box, and a lot of users wanted to check it out.

Once they entered r/Place, they got engaged in the project together with their entire communities.

Authority bias works when we follow the actions of our idols and people who we find important.

In the case of Reddit social experiment 2022, the second edition of r/Place, streamers brought many users to the event. xQc's audience on April 1, 2022 was more than 200,000. They stormed r/Place when they entered it.

Josh Wardle has already had big successes such as Wordle (a word game) in his portfolio when he created r/Place.

Wordle scored large numbers in terms of popularity especially when Lingo, a popular TV show from the past, got a second life in 2020. Josh has that unique ability not only to ride trends, but also to invent them. Wordle's prototype had its launch In 2013.

The first version of r/Place was a new Reddit social experiment by Josh Wardle. Reddit often uses April Fools' Day as an occasion to come up with some engaging events for their communities.

r/Place 2022 was simply repeating an already tested idea, but polished to gain even more traction. Also, social media are much more active and intertwined in 2022 than they were five years earlier.