Wordle – an online daily word game created by Josh Wardle, a software engineer from Brooklyn. The game mechanics are based on guessing a randomly selected five-letter English word in maximum six attempts. With every guess, letter tiles change their colour: a right letter in the right position lights up with green, a right letter in a wrong spot lights up with yellow, and a letter that is nowhere in the word is marked with gray. Each day the word changes and is the same for all players.

Who was the creator of Wordle?

The Wordle was created by Josh Wardle and published in 15 October, 2021.

Though, its prototype version was created in 2013.

Wordle is known for its simple rules, modest design and overall minimalism. The site offers very few distractions, the most notable buttons redirecting to gameplay explanation and statistics. In sharing the results, the creator decided not to include a link to the website to make it even simpler and kept it spoiler-free. ”The game has the elegance of a daily newspaper magazine,” said The Guardian’s review, which praised it for its refreshing quality.

Wordle has been designed as a game for Wardle’s partner and later was enjoyed by their friends and family. The original creator never intended to monetise it, but according to him the project became too engaging and he sold the rights to the game and its brand to the New York Times. The news outlet is known for their word games, crosswords and quizzes, some of which are available only through subscription. However, the New York Times confirms in the game’s FAQ that Wordle remains free to play even for unregistered users.

Wordle became famous partly for providing a competitiveness factor – players share their daily score in family group chats and publicly on social media platforms, particularly Twitter (in the form of yellow, green and gray emoji squares). For many it became a daily ritual. Some people complain about the obscure word or on the contrary – rejoice with their friends at their successful and brisk attempt at guessing the word. Wordle serves perfectly as a bonding tool with friends, colleagues or acquaintances.

Once Wordle became shareable on Twitter, its popularity grew organically. Many journalists introduced the new viral game in their writing and stories about Wordle started to appear in every news outlet. Apart from standard coverage, there were also peculiar news related to the Wordle craze. A media story about a woman saved from a hostage situation surfaced in February 2022. Her daughter was distressed when her mother did not send her a daily Wordle score and asked the police to check on the elderly lady. 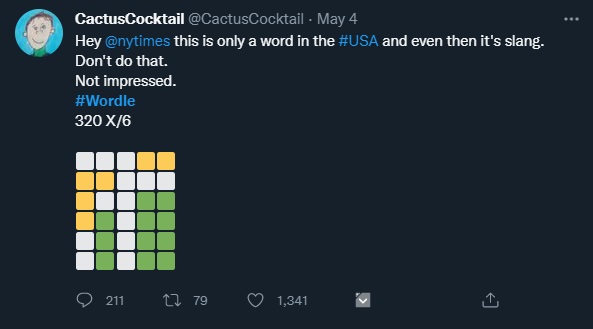 Wordle has its limits

There is a finite number of five-letter words that are not obscure or offensive. The words to guess in Wordle will run out in October 2027 as there are only 2,315 of them. This is a time period that might seem both distant and realistic at the same time.

Wordle has rekindled human creativity in designing simple games. Many variants include not only regional language versions (Chinese, Spanish, French, Italian, German, Polish, Japanese and many more), but also musical, mathematical and even satirical variants mocking the Wordle craze (such as Absurdle).

Wordle looks just like a popular TV show “Lingo.” It was originally aired in the 1980s and then relaunched in a refreshed form in 2020. Wordle came in 2021 and rode the nostalgia of the resurrected TV show.

How much did Wordle sell for? Who bought Wordle?

In January 2022, Josh Wardle sold The Wordle to The New York Times for $3 million.

Wordle offers a record of user streaks that indiciates the number of days in a row when a user successfully guessed the word. The psychology behind maintaining a streak is simple: the longer it goes on, the bigger the success. Whenever a streak is broken, it plays on the emotional response system. Therefore people who have successfully invested their time into playing a Wordle want to maintain this streak. For many the biggest concern after Wordle was migrated to NYT servers was to keep their streaks intact.

The Wordle gameplay is limited to one take per day. Every 24 hours the word is refreshed and missing the time-slot means losing the streak. This and the fact that participating in the game takes just a few minutes makes it desirable to actually engage in it. Josh Wardle himself wrote about his game that it reminds him of eating a croissant: “Enjoyed occasionally they are a delightful snack. Enjoyed too often and they lose their charm. I wanted Wordle to fall more in the ‘delightful snack’ category.”

Wordle became a global phenomenon and daily results are being shared online by people from a number of countries. English as the modern lingua franca sets the tone for many pop-cultural phenomena taking place these days. Wordle was able to spread because billions of people can speak English and participate in the game. Following the trend was actually within their reach and the cost of participating is very low.

By sharing the results online (e.g. on Twitter), people feel like they belong to a larger community of fellow players. It provides them with a sense of connection; it can also help people reconnect with family members, check on them or it simply serves as an excuse to get in touch. Even if it produces rivalry, it is usually innocent and friendly, which makes Wordle an overall pleasurable experience.

People value their Wordle score and share it online simply because it is their personal achievement and provides them with a sense of success. Objectively it is not a huge triumph to solve a puzzle, however, most of us find it significant enough to let other people know about our results.

Wordle shows that a reinvented classical idea stands a chance in a world of pushy, loud, and colorful entertainment. It also reminds of the great results simplicity can produce.

However, the biggest opportunity it presents is using the scarcity principle to market a product. Both the creator behind Wordle and numerous experts agree that the game would not have been so successful if it were more available to people. Limited availability can be crucial in drawing people into any venture.