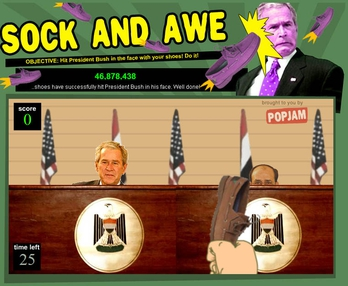 Sock and Awe viral flash game - how a web, shoe-throwing game got 9M visitors and collected 120k emails, all

within the first week (10 min read)

Sock and Awe – a flash game created based on a real-life event when Iraqi journalist threw his shoe into George W. Bush during a press conference in 2008. The Sock and Awe creator, Alex Tew, recreated a viral video and made the game go viral, too. He then used that success to promote his other website, PopJam.

Who was the Sock and Awe creator?

The Sock and Awe viral flash game was created by Alex Tew, a man responsible for the Million Dollar Homepage and the Calm app. He was already rich before he spotted a chance for a new project.

While talking about his way to success, Tew mentioned a few ways of becoming successful and launching a million-dollar business, but the one he chose was based on using his imagination and being original. He described it as looking at a herd of cows and paying attention to the one that’s standing out the most, the unusual one, the “purple cow”.

Tew paid attention to what was being talked about on the news, what people were posting about and sharing on their social media. That’s what gave him the opportunity to react quickly enough to use that attention that George W. Bush shoeing had.

Tew had spotted the purple cow, but he knew that viral content spreads fast and burns out just as fast as well. He jumped onto making a game out of a viral video and managed to launch it in only a day after the story made the headlines.

How did Sock and Awe become popular – Having a simple idea

Alex Tew had a framework for launching ideas that maximized his chances to succeed.

With projects like this, the chance of it going viral is small, while the possible gain is high. But because it’s a simple, low-cost idea, it makes space for making errors and taking many chances. 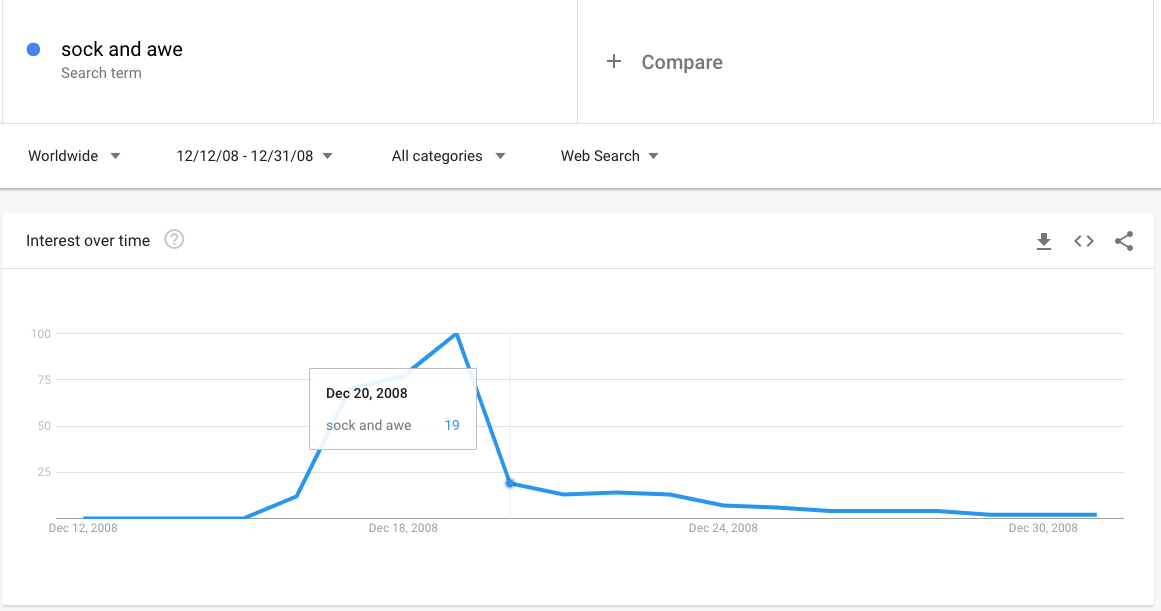 All the above was simple trend riding, but there’s more to it. Riding trends can be also an SEO tactic in which producing content around a trending topic gives you much higher chances of landing high in SERP. While there are many searches around that topic, you’ll get plenty of traffic – if you’re lucky enough to land a high position early on.

How did Sock and Awe become popular – Word of Mouth

A large part of the traffic generated could be by word of mouth. The story was all over the media, and it was genuinely funny. With that, once someone in a group of friends finds out the game about the breaking news, he was likely to show it to a few more people. On the macro scale, this could lead to hundreds of thousands of views.

Once the amount of interest towards the Sock and Awe viral flash game peaked, resulting in 9 million unique visitors in 7 days, and knowing that the next site – PopJam – would never attract that much traffic on its own, Tew decided to put an email capture form in the game.

It informed users that if they enjoy that type of content, they can leave their email address and that they’ll be notified once PopJam, offering similar content, is launched. Thanks to that, they were able to collect 120,000 email addresses and attracted over 100,000 users to their site in the first week.

How did Sock and Awe become popular – Media coverage

All that media want is to squeeze the breaking news as much as they can, so they get the most attention to the news. Then, the bosses and advertisers are pleased. They couldn’t resist covering a game in the story that was huge at that time, just as it broke out. That fueled the growth of the viewership of the Sock and Awe viral flash game.

How popular was Sock and Awe?

Only two days since its release by Alex Tew, the game has scored 1.4 million views and times of being played, and Google Trends for the “sock and awe” search term peaked around that time. Moreover, before the game even launched, the sock and awe topic was lively discussed on Twitter, too.

How did Sock and Awe become popular?

The Sock and Awe viral flash game became popular because it was very well-timed with an important event. The name of the game was based on playing with words, too (“shock and awe” is a name of a technique used in armed conflict). What’s more, Twitter discussions also boosted the overall hype for the Sock and Awe viral flash game, and its simplicity helped it reach even the most casual “gamers.”

People have difficulties with choices when faced with many options. In this case, the users of the “Sock and Awe” viral flash game faced a very simple message, an offer based on clear and non-binding terms: their email address in exchange for notification about PopJam launch. The simple decision of “yes” or “no” was made even easier, since the content offered to them was described as similar to the one they already knew they enjoyed.

Fear of Missing Out (FOMO)

Because the news about the shoeing incident, and later the game itself, were trending, many people jumped on the bandwagon simply because they didn’t want to feel like they’re missing out. That’s where the huge importance of something being viral shows, and that’s how the phenomenon of the Sock and Awe viral flash game was formed.

Individuals are mimicking the larger group’s behaviors. Everyone was playing the Sock and Awe viral flash game, everyone was talking about it, and many joined the party simply because many other people did it already.

The game was shared everywhere, which created the feeling that everyone’s played it. When making decisions, people check what others are doing and here – they simply joined the bandwagon of everyone referring the game.

“Sock and Awe” stemmed from an incident everyone who followed the news could be the witness of. The answers to questions such as “Why was the game created?”, “What does the game's name mean?” could be answered by a large group of people, giving it all more meaning, making it closer to the user’s personal experience, and as a result easier to understand, accept and be a part of.

The Sock and Awe viral flash game wasn’t too complex on purpose, but that means anybody could copy it. However, the first mover’s advantage was what made it grow, while any kind of copy could barely get any traffic.

When we get something, we feel the need to give back. The game was funny and cool at that time, so when the creator asked to leave an email, some could’ve felt that it’s the least what they can do to give back for a free game.

Sock and Awe viral flash game was part of a game genre called newsgames that portray real situations. It started in 2003 with a game called September 12 in which you had to kill a terrorist in the Middle East, with as little collateral damage, as possible.

The biggest lesson here is not necessarily in how you can market your product, but more in how you can go viral and how to make a viral product. Paying attention to the trends and acting fast is what still works, but in order to do that, you’d need to follow a similar framework that would allow you to introduce ideas cheap and with high potential. Sock and Awe, and then PopJam, shows that this strategy, while not too sexy, simply works.