Robinhood is a Commission-free trading app launched in Jan 2015. It collected nearly 1M users before the launch.
In May 2020 Robinhood closed $280M Series F funding at an $8.3 billion valuation.

Born with a silver spoon in his mouth

Robinhood's history follows that of many other successful business giants. Vladimir Tenev, Robinhood's co-CEO, comes from a well-educated family, with many years of experience in finances. Vladimir's parents wanted him to focus on that sector as they found it to be one of the most stable and safe way of making for a living.

Not his first business

Robinhood wasn't Tenev and Bhatt's first company. They started with Chronos Research, where they were offering funds and banks some tools for building automated trading strategies. They've got their first on-hand experience in finances then.

Winding-up the hype for Robinhood before it was even launched is called a pre-launch campaign. It's a common strategy in many businesses if the owners of a company want to make their potential customers curious about their products/services.

Learn from others in the field

Tenev admits they learned how to use waitlist on the example of Mailbox. They saw that simplicity and being direct can work magic, and they implemented it in their own project, and… it worked!

A year before the app was launched, the founders Vladimir Tenev and Baiju Bhatt have created a simple website with a sign-up form, saying "Commission-free trading, stop paying up to $10 per trade."

Day after they launched their waitlist, Robinhood referral waitlist landed on the third place of the Hacker News. When you signed up with your email, you were put on the waitlist which would show you: There's "x" number of people ahead of you, and there's "x" number of people behind you. The higher on the list, the earlier you got access to the beta.

The more friends you get to sign up for the waiting list, the higher up your position on the waiting list becomes. The first few sign-ups were acquired from family and friends.

This, combined with the gamification effect, gave the ultimate result of people's desire to “win” before others. In other words – they want it so bad to be on the top of the waitlist. They got to be first to check Robinhood out.

Vladimir Tenev, the co-founder of Robinhood, described that they've built their app aiming to “(make) trading as frictionless as possible," and commission-free trading fits right into this description.

Seeing how good was introducing the waitlist strategy in the beginnings of their website, Tenev and Bhatt decided to use it with their new service – trading cryptocurrencies.

Taking advantage of the cryptocurrencies craze, they tried they luck with a method they already knew. Just as they had predicted – the response there was huge, too. 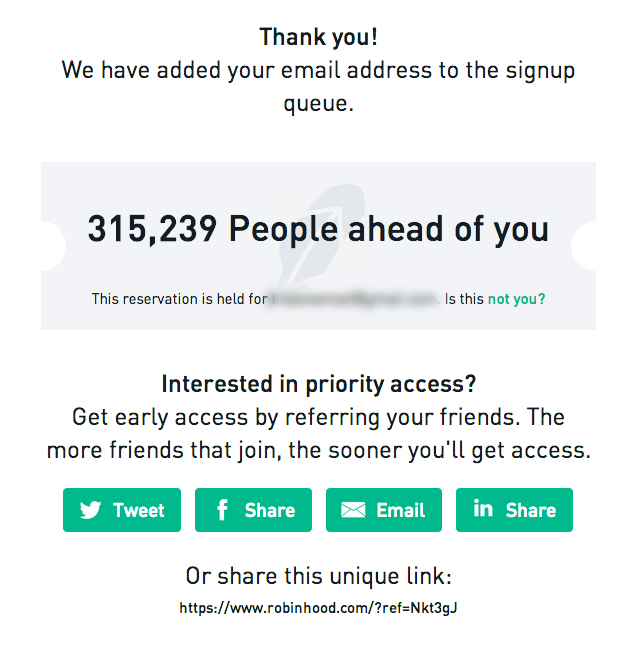 Robinhood kept the sign-up process short and simple. When a person arrived on the landing page, there was one powerful hook "Commission-free trading, stop paying up to $10 per trade," one task – entering their email address, and one button to subscribe.

Our attention span is only about 8 seconds now. Let's keep it simple.

The referral priority program enticed people’s desire to win. They also didn't want to lose the position on the list they had at the time

FOMO - Fear Of Missing Out

Social anxiety, originating from the belief that others might be having fun while the person is not present. It is characterized by a desire to continually stay connected with the newest information

Nobody wants to miss out important information or event, and that's why the Robinhood webpage was so successful and why their waitlist scored 1 million sign-ups. People saw others have already signed up. If they hadn't done the same, they would have missed something valuable that the signed-up would get.

Anticipating something positive gives stronger effects if we know for sure that it will happen.

The users who have entered the Tenev and Bhatt's webpage were instantly informed that the project is about to start soon, so they'd better sign up NOW. It let them know that there is a thing to be anticipated, and that thing was to be GOOD (that “0% commission” thing, right?).

When we are in larger groups, we are more likely to act in a certain way.

The Robinhood referral program certainly made people want to get in groups. You had to share the link to the page to move higher on the list. The more people you shared the webpage with, the higher was the chance that you would “win” (be the top 1 on the list).