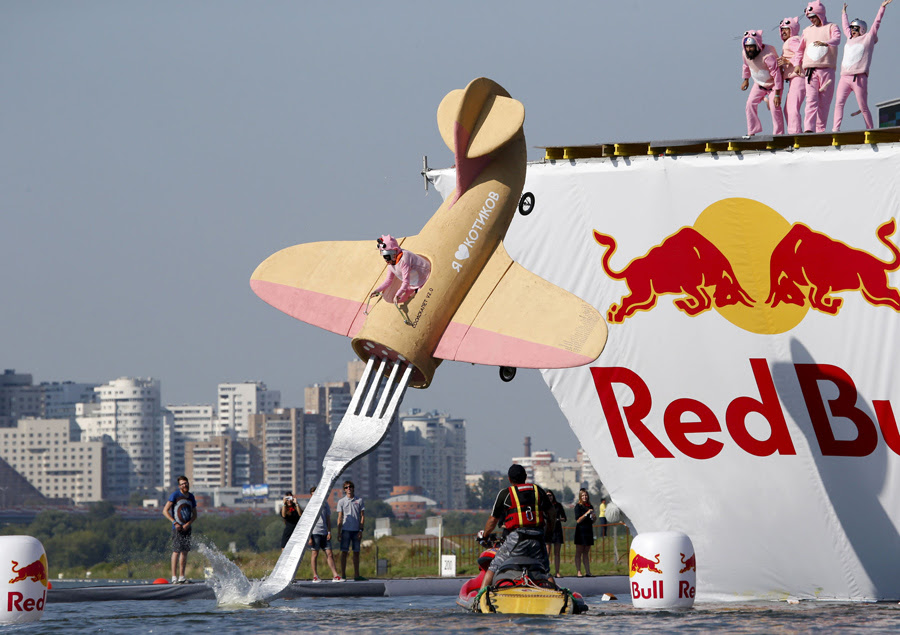 What is Red Bull Flugtag?

Red Bull Flugtag is a Red Bull marketing event which is held in the form of a competition. Volunteers come to participate by jumping off a 9-meter ramp right into water, and all of that in the aircrafts of their own craft. The participants get judged and awarded not only for the distance they flew, but also for their creativity visible in their machines' uniqueness.

Who created Flugtag, and when did Red Bull Flugtag start?

Dietrich Mateschitz, the founder of Red Bull, is responsible for the creation of the Red Bull Flugtag event. It all started in 1991 in Vienna, Austria  The event was something completely new then, and it was such a great success that it's organized every year since then.

How did Red Bull Flugtag start?

Red Bull Flugtag started as a relatively cheap marketing event since, at that time, Red Bull was still a young company without big money. The first Red Bull Flugtag competition was in Vienna, Austria (the country of Red Bull’s origin) and since then these competitions have been held in over 20 countries. The world record for attendance was set in 2012, during the event in Cape Town, South Africa, with 220,000 people attending.

Red Bull’s marketing evolves around their well-known tagline — “Gives you wings”. The name of the Flugtag event (“flight day”), as well as its idea, fits perfectly into that narrative. Red Bull produces some of the most action-packed, high-flying sports and activities, Flugtag being one of them. 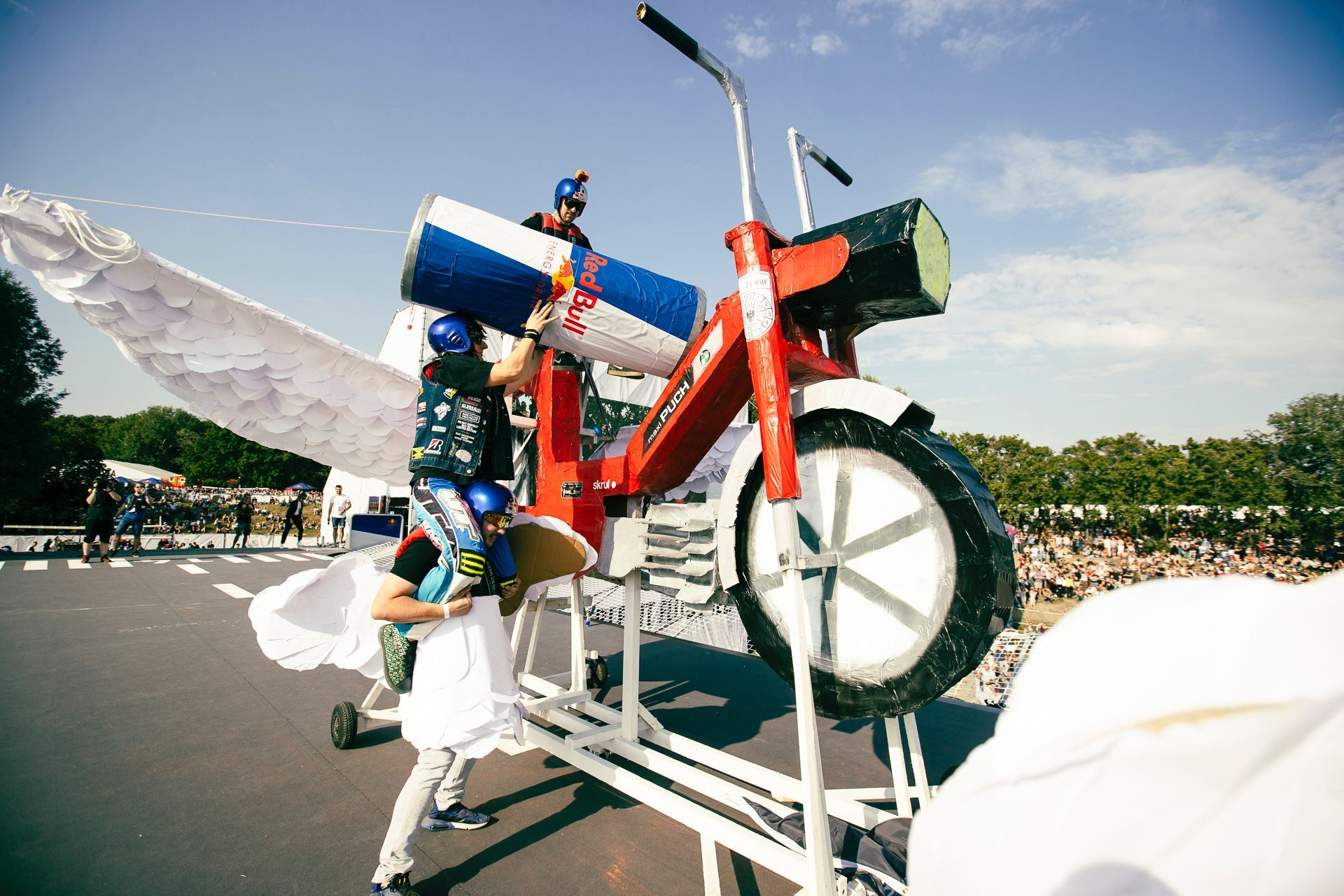 Fueled by the idea standing behind the tagline, Red Bull’s content is pure entertainment, interesting even to people not caring about energy drinks. Through Flugtag, the company can engage with its consumers, providing experiences that excite and challenge participants and spectators.

You could think of the Flugtag as a user-generated content. Red Bull provides the venue, rules, and incentivizes participation by offering prizes, but it’s to the contestants’ creativity how that will unfold.

UGC has the potential for virality, too. Considering each participant will want their friends & family to watch how it goes for them, they are the ones who do marketing. Think: if there are 150 teams, each of 4 people, and each participant brings 4 people with them, that’s 2,400 on the audience.

Red Bull was always innovative, both in the terms of the product, and its marketing efforts. It targeted youth through extreme sports and later through all kinds of sports.

An intriguing innovation was creating their own extreme sports. Flugtag was the first and as it was designed by a brand, a lot of aspects were carefully thought out – it’s entertaining and funny to watch, it allows the participants to become contestants, it has the potential to be aired on Extreme Sports Channel, and to watch on tribunes.

Later on, other sports were invented – Red Bull Ice Cross (similar to cross country skiing but on skates), Wings for Life (a charity mass run with a twist – there’s a car chasing runners. If it passes them, that’s their end. Not literally, it has its separate track), there are also local competitions, like slope downhill races on anything built by the contestants.

Events organized by Red Bull and activities promoted at those events are focused on building talent and pushing the sport to new levels through innovation. All this at a low cost, but at the same time, with great results. That’s pretty clever – instead of sponsoring events and teams, you can create your own low-budget sport.

As a part of the Red Bull Flugtag marketing strategy, the brand created an image that associated the product with youth culture and extreme sports.  Flugtag is something fun, different, and also easily shareable, especially online. This type of marketing basically gets done without any effort. Photos and videos of Flugtag’s contestants are the perfect viral material since they provide funny, creative, and crazy content. 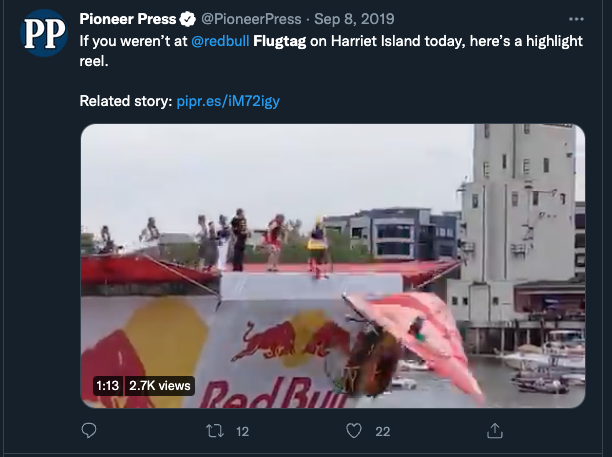 Continuing with the Flugtag brand

Red Bull and Giant Lazer worked together to bring to life the Flugtag Competition as a VR game. The goal was to let anyone who would want to experience what the Flugtag’s contestants feel. Also, The Red Bull Flugtag game was created, playable on mobile and tablet devices.

We base our perception on selective information we have about something, often positive ones. Red Bull is seen as a fun, innovative brand, with a product appealing to various types of people thanks to investing in activities that revolve around those emotions.

Bizarre things are easier to remember. Seeing people drop from a 9-meter platform in a cardboard plane is quite bizarre, although it’s not that you’ll remember it for years – it’s enough to make you talk about it after the event and remember the context – that Red Bull organized it. That's what Flugtag event marketing is all about.

Flugtag event marketing bases on visual sources as they have a much more lasting impact on us, so our brain retains information better if it comes in the form of images. Photos and videos from Red Bull’s events, such as Flugtag, shared over and over again, build a strong connection between feelings and emotions associated with the event, and with Red Bull’s product.

Fear of Missing Out (FOMO)

People want to become a part of the Flugtag or at least know what the thing’s all about because they simply don’t want to miss out. It’s a perfect example of the huge importance of something being viral and becoming mainstream, whether that’s an event, a product, or a whole lifestyle.

Stories carry emotions and are remembered better. All that Red Bull does with sports is building their story at various points of contact with the audience. Flugtag event marketing was based on that, too. Each Flugtag event and every sports team they sponsor tell you more about what the company can achieve and how competitive it is. After all, it all comes down to making you remember it.

Organizing a rather low-cost event makes the brand feel more authentic and down to earth – and such brands are often favored by the clients.

A company that now makes over 6.3 billion euro in revenue a year hasn't always spent huge budgets on marketing – with much success. The key is in creativity but unleashed in ways that have a large potential.

Flugtag event marketing is a mix of many tactics that created an engaged community around the brand that could market it further. Sometimes limiting the budget on purpose is what can result in great ideas that will take your brand further than if you had the comfort of financing anything you come up with.

Use this case as an inspiration – maybe you’ll create the next Red Bull?