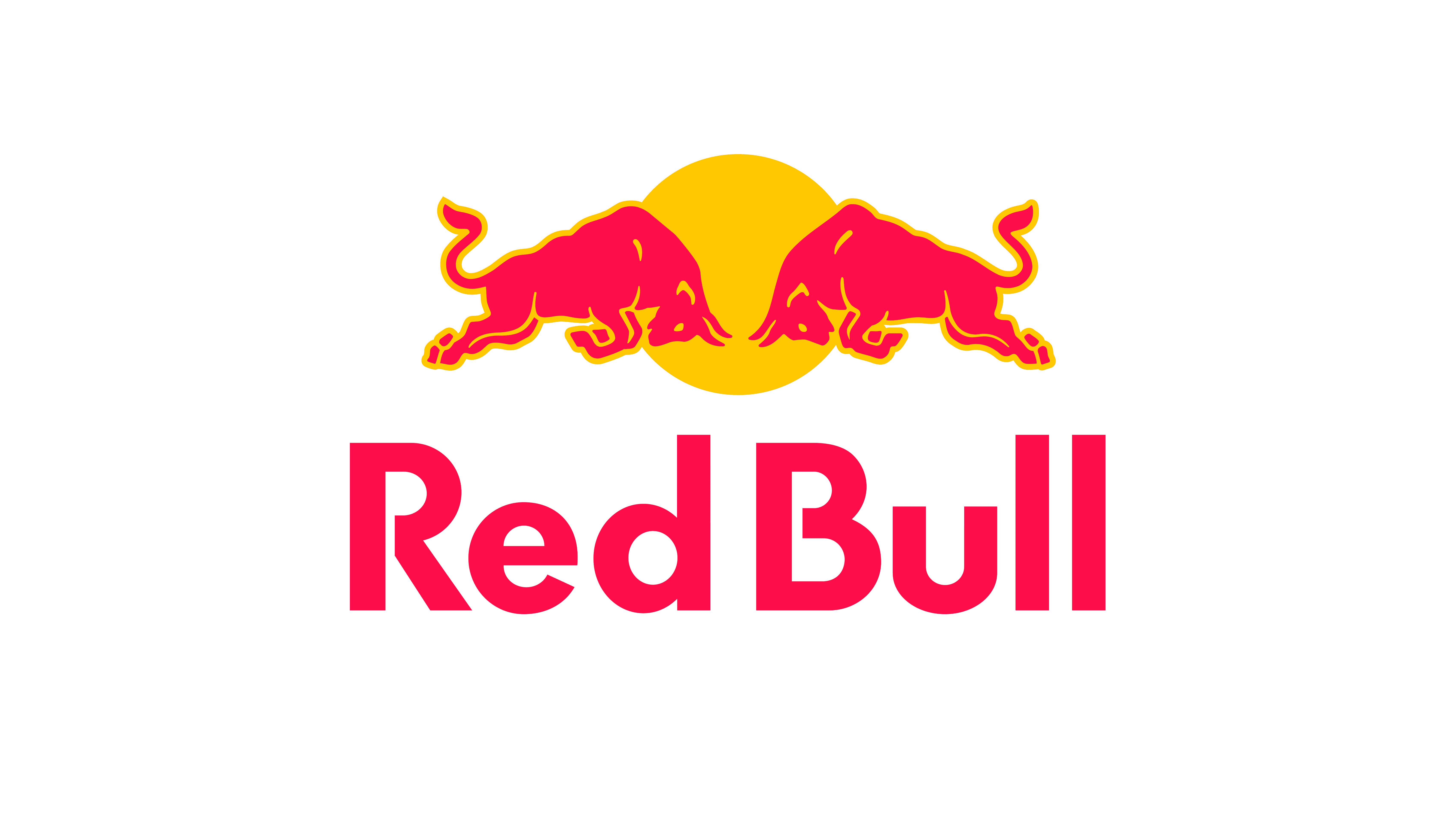 Red Bull creative marketing strategy – How to create a $25.4B brand by following your audience (9 min read)

Red Bull is an Austrian energy drink producer. The carbonated beverage containing caffeine debuted on 1 April 1987, paving the way for the category of energy drinks in the Western markets.

Since then, Red Bull has been growing not only as a global FMCG brand, but also as a sports, dance, gaming and social sponsor. The company is known for its unique approach to branding and continues to win market shares.

Red Bull has defined their target audience long ago and stayed at it. Young males, aged 18-35 was both narrow and as wide as it can be–worldwide that’s still millions of people. That choice has influenced almost all the decisions they made regarding marketing.

Marketing is much more powerful when you know who you’re communicating to. Red Bull has done their homework when trying to understand the audience. They figured out their preferences, hobbies, passions, and life style.

The customers they were after loved active lifestyle, extreme sports of all kinds, partying, and many of them were in college. Surprising them with more and more bold ideas meant keeping them as their customers.

Who is the Red Bull founder?

The Red Bull was founded by Dietrich Mateschitz and Chaleo Yoovidhya. They soon became ones of the richest people in Austria and Thailand, accordingly. The net worth of the Red Bull founder, as of January 2022, is estimated to be $25,9 billion.

How successful is Red Bull?

The numbers show that Red Bull marketing strategy gave it about 25% share of the US energy drink market in 2019. It is estimated that in 2020, the global revenue of the Red Bull company was something like €6-6,5 billion. Of course, the numbers keep growing.

Early years of Red Bull in foreign markets are marked with guerilla marketing techniques. Although highly unauthorized, they proved to be very effective. The rumor has it that they put some empty Red Bull cans in a random, yet crowded with their target audience places (clubs, parties, events), and leave their trace through guerilla marketing.

Red Bull was found everywhere where the target customer group could spend their free time: college campuses, clubs, pubs, concerts and sports events. It was given out as a free sample or even reportedly even placed on purpose in trash bins – this seems to be untrue, but there’s no official statement around that. It would be creative but we don’t know if it was effective.

The free samples created an impression that the drink is commonly drunk and therefore – desirable. Multiplied by thousands of times, this became a global trend for Red Bull.

In the early stages of the company, Red Bull still didn’t have the budget to become a sponsor to well-established events they wanted to target, e.g. festivals, sports events or races. Instead, the company chose to create their own events. The Red Bull Dolomitenmann in 1988 was the first one – an extreme relay race in Austrian mountains. Then it was the spectacular Red Bull Flugtag of 1992, which featured people attempting to fly using DIY flying machines.

After that there was a number of events initiated by Red Bull, now outside its native Austria: Red Bull Cliff Diving (1997) in France, Red Bull Music Academy (1998)(8) in Berlin, to name those that started within the first decade since the drink’s debut.

What all the events had in common was the extreme factor: extensive ironman-like strain, glorious flying attempts, daring cliff-diving or unleashed musical creativity. What is even more important is that Red Bull has stuck with most of these early projects for years now, for instance in 2021 the Dolomitenmann has been held for the 34th time, still under Red Bull banners. Speaking of which – the branding of the events is heavy and leaves no doubt as to who the main sponsor is.

Another marketing strategy applied by Red Bull revolves around signing athletes that are relatable and exciting to watch. They correspond to the specific target audience of Red Bull, who want to admire F1 drivers, extreme sports performers, gamers popular in the eSports world. In short – Red Bull sponsors those athletes that their audience would like to watch and support.

This is a very similar approach to Nike’s brand building but it hadn’t been done for an energy drink before.

Red Bull makes money using both traditional advertising on TV and in digital to communicate their messages. It still does both, but the focus on new channels is impressive. Social platforms allows Red Bull to engage with their audience, and creating shareable content allows them to build organic traffic. Felix Baumgartner’s sky-diving stunt was the most live-streamed event at that time on YouTube. Again, Red Bull is wheverer their audience is.

A side effect of Red Bull’s ability to make people appreciate extremes is the extremely popular alcoholic drink made by mixing the energy drink with vodka. Although the stories of its origins are vague and unauthorized, it is true that nothing confirms a popularity of a product as making its way to bar menus.

Red Bull increases its recognition at the points of sales by putting branded freezers in a visible spot.

This strategy has been used in clubs, too. Their demographic could see the fridges, so they were exposed to the brand, and immediately recognize that they can order the drink to keep partying late at night. 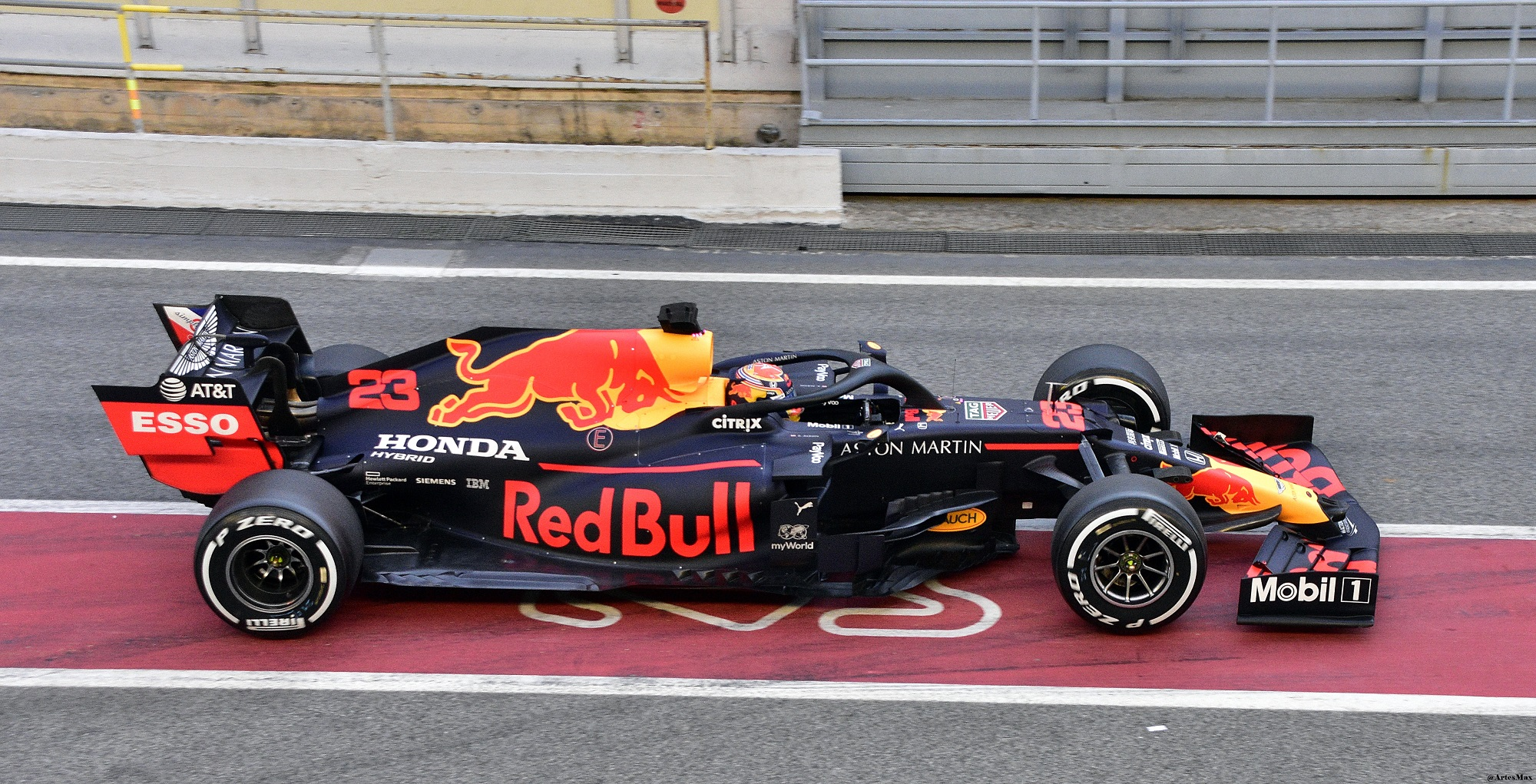 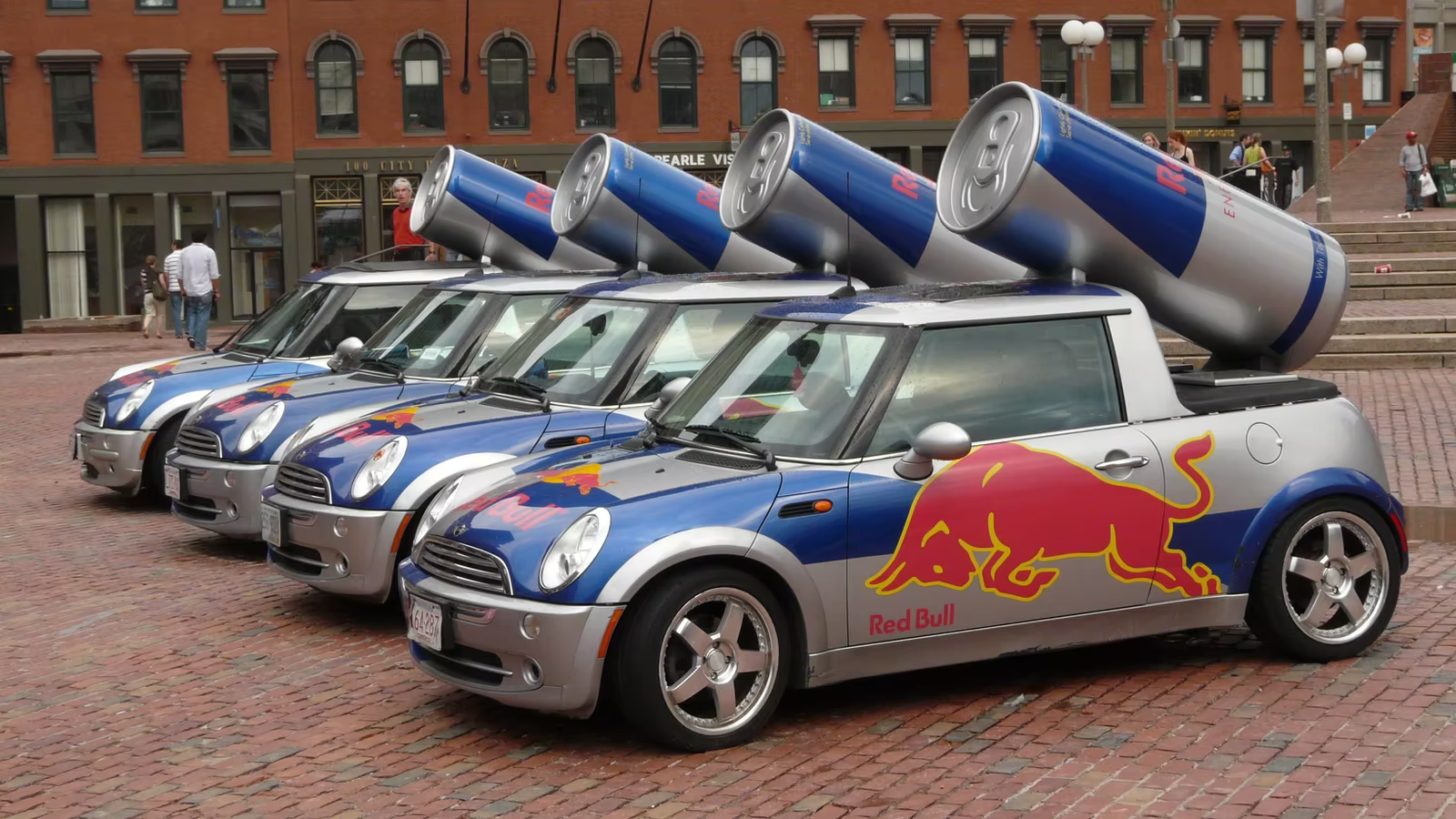 Red Bull marketing strategy focuses on creating memorable experiences – the “peaks”. The majority of the audience does not perceive the success story of FC Red Bull Salzburg as a long-term project taking its course over several years – they see a successful relatively small team reach the Europa League finals, and that leaves an impression.

Red Bull drink is associated with fun activities, such as college parties or music festivals, where it was first distributed for free. Once the connection is established, it is easier to associate the energy drink with fun memories, and vice versa – people attending another music festival might want to reach for a can of Red Bull, because to them this social event is inseparable from the drink.

In order to avoid churn, BuzzSumo prioritized getting into their users’ everyday habits. Habit formation is a process and by staying active and present (notifications, trending dashboard) BuzzSumo made its way into the users’ daily workflow. When checking BuzzSumo became a natural instinct, the objective was achieved.

Red Bull uses a specific group of influencers – high energy level figures, often athletes, prominent gamers, entertainment industry experts – to promote events branded as “Red Bull events”. It is important that the influencers do not tend to advertise the drink itself – they promote an event or project and the experiences following them.

Foot in the door

Early years of giving out Red Bull samples for free proved to be an effective technique in spreading word of mouth and thus advancing the business even further. College students who got Red Bull for free were later likely to drink it as they turned into young professionals who could afford buying it.

One of the brand features can influence its general perception. With Red Bull, sponsoring extreme events and daring attempts makes the brand seen as extreme and daring.

Red Bull events which are always heavily branded. The attendees who come to see a performance, sports show, participate in a creative workshop, are familiarized with the availability of Red Bull. While buying a drink, they might later express a preference for Red Bull due to their familiarity with it.

In the initial stage, energy drinks were not widely known to the European public. Drinking it might have been seen as a unique experience. The unique can design added to the experience. 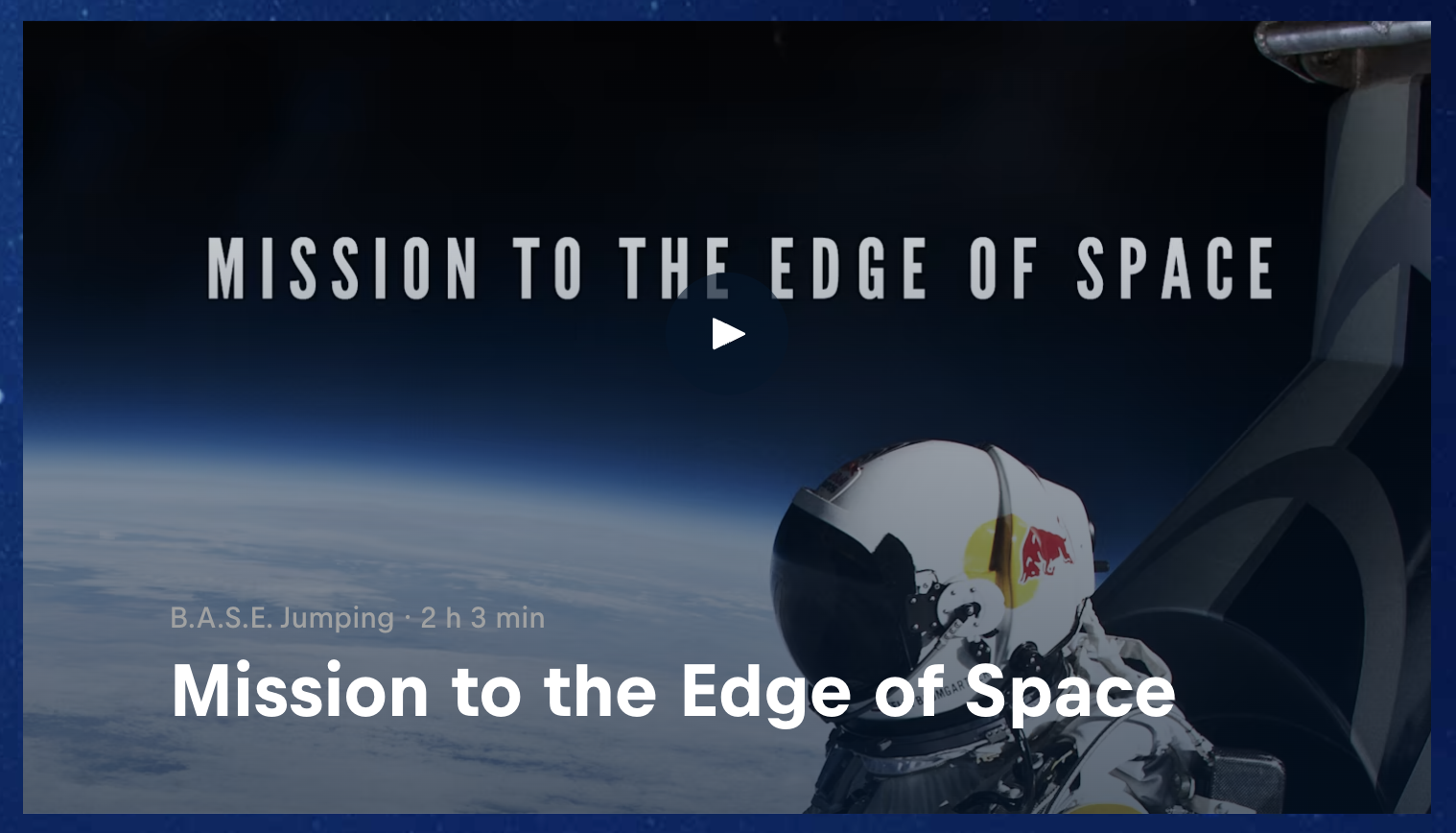 Red Bull is a global brand now that attracts all kinds of people but it has been built on a laser-focused targeting. Every marketing activity has been made to attract young men. This tactic proved to be more effective as the messaging and ideas were resonating well with this specific demographic. That allowed for faster growth while eventually people that weren’t in the demographic became consumers, too.

Knowing the audience is key in marketing and while it might seem as limiting the potential for growth, staying consistent with activities that resonate with the narrowed audience works the opposite. Try that!