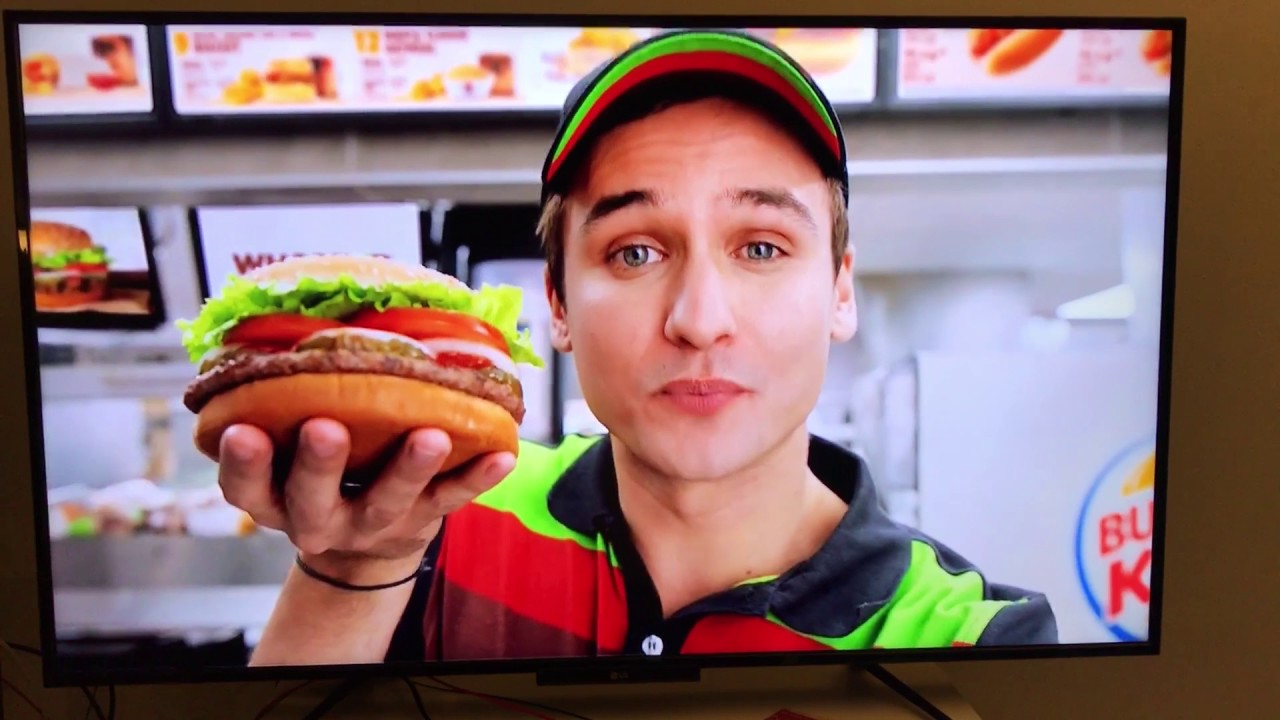 Ok, Google "What is the Whopper Burger?" - a story of how 15-seconds creative ad hacked into people's houses, and got $135M in earned media, 15M views within 48h, 500% increase in brand mentions, and 9.3 Billion global impressions

Who made the Burger King commercial?

There is some evidence that the person behind the “Ok, Google – what is the Whopper Burger?” campaign is Fernando Machado. The first few words in Whopper Burger Wikipedia’s entry have been added by a user nicknamed “Fermachado123.” This is the same name the Burger King’s marketing chief uses on his Instagram profile.

“Ok, Google – what is the Whopper Burger?” viral marketing campaign

Google became “the home of Whopper” when the actor’s voice woke up the nearby Google Home devices. The Burger King ad has scored a large number of around 2 billion impressions in just a few first hours. Burger King’s campaign was the first to enter homes by force via voice-enabled speakers.

It quickly went viral because of the various edits of the Burger King commercial on the Internet. Although Google tried to block the ad, the audience feedback was just too big.

How much money did the “Ok, Google” Whopper Burger commercial earn?

The Burger King commercial “Google Home of the Whopper” has earned an estimated amount of $135 million in earned media. It has also scored more than 10 billion impressions worldwide.

The whole campaign wouldn’t have been so successful if it wasn’t for the vast community. People picked up the catchy ad, and they made it viral in a few days since its release.

It’s not easy for fast food ads to score big nowadays. The Burger King ad was a success because of their unusual strategy. They started from editing the Wikipedia entry, which was a move ahead of the entire campaign.

What Fernando Machado did was just adding some marketing slogans as to what are the ingredients of the Whopper Burger. The list of ingredients of the burger isn’t too long, but you will know what is going in that Burger King ad when you hear it on your home cinema speakers, it sounds all different!

What are the Whopper Burger ingredients? Well, as the Burger King commercial said, it was “flame-grilled 4-ounce patty made with 100% beef,” a “sesame-seed bun”, some “mayonnaise,” and all the “filling”, namely “lettuce, tomato, pickles, ketchup, and sliced onion.”

The numerous edits of the Burger King Whopper Burger commercial basically focused around “playing” with the burger’s ingredients list. The pranksters here were very creative, like in no other fast food ads. Some edits claimed that the Burger King Whopper Burger ingredients contain “malted milk balls”, “juicy rat meat”, and even a “100% medium-sized child…”

Burger King saw an opportunity to do something exciting with the emerging technology of intelligent personal assistant devices. 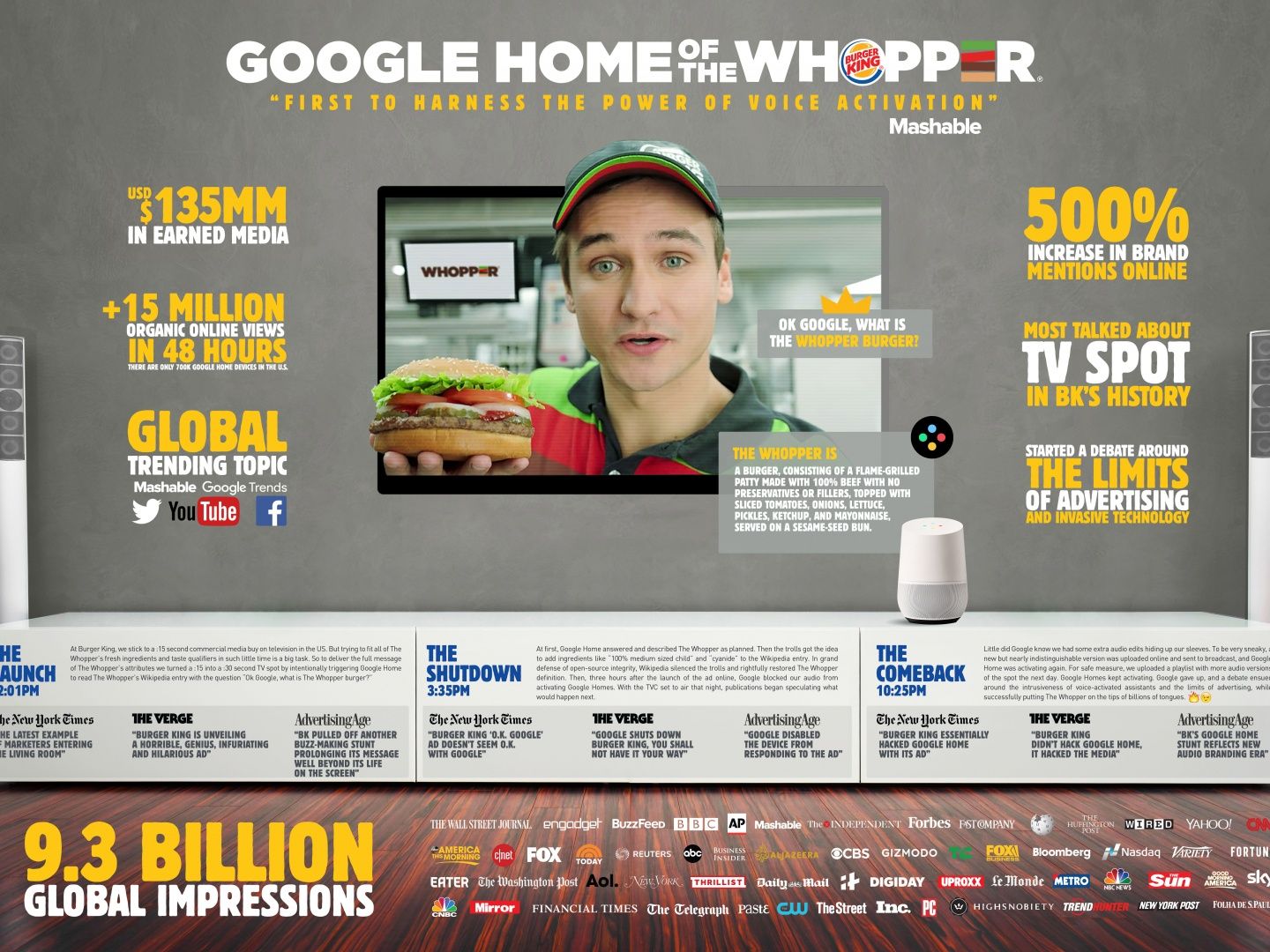 Burger King’s campaign wasn’t the first to enter homes by force via voice-enabled speakers, but it was the first to do it on such a scale.

A first-mover is a service or product that gains a competitive advantage by being the first to market with a product or service.

In marketing strategy, the first-mover advantage may be gained by technological leadership or early purchase of resources.

More than 100 edits of the Burger King commercial added a lot of humor to the whole campaign. Of course, the very fact that a TV advertisement could wake up your smart home devices was already hilarious and funny.

The more self-confident we are, and we believe in our abilities, the greater the chances for success.

The Burger King team knew that people who love Whopper Burger ingredients won’t believe pranksters editing the Burger King commercial. The team strongly believed in their products, and had nothing to hide. It was also a bit of their transparency that did the job here, as customers tend to trust such companies more if they remain sincere and confident about what they have to offer.

Controversy is a key if you want to get people talking.

Using controversy in marketing campaigns is becoming more and more acceptable by brands. If done correctly, it can be a great way to get your brand noticed. However, if it backfires, it can do more harm than good to your brand.

Burger King’s goofy identity allowed it to create such a marketing campaign without receiving much damage.

By exploring the new technologies, Burger King has achieved something that probably will be not possible by other brands.

The same trick won't have such a huge impact on people, but still might work on a smaller scale. Nevertheless, it is always good to remember to be more confident about your products if you know that the quality is really good.

Don’t hesitate to take alternative paths, too. Nobody had never done anything with Google Home on such a scale as you could see it in the Burger King Whopper Burger commercial. Combining user-generated content from Wikipedia with the capabilities of the new technology gave rise to a completely new level of viral marketing.