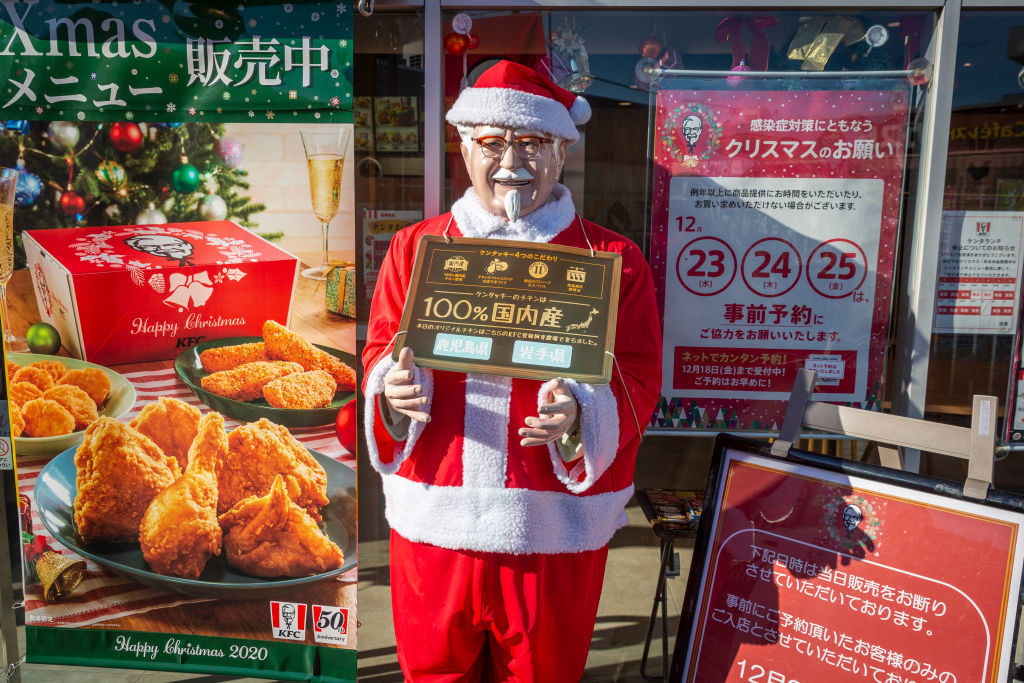 KFC Christmas in Japan - Every year an estimated 3.6M Japanese families sit down to a Christmas dinner with KFC as the main dish.

Before the “KFC on Christmas” slogan got popularized, the beginnings of KFC in Japan were hard. No one was buying fried chicken.

The situation was so bad, Okawara was left nearly homeless, sleeping on sacks of flour in the kitchen to save on rent.

Customers didn't know what to make of the red-and-white striped roof and the English signs.  No one knew what they were selling. The most common guesses were chocolate shop or barber.

He kept pushing, though.

The origin is not that clear. Even KFC officials have stated different versions. One is that shortly after launching the first KFC, Takeshi Okawara came up with the idea of a “party barrel” that would be sold on Christmas. It came to him as he dreamt, once he overheard a couple of foreigners in his store talking about how they missed Christmas turkey.

Okawara thought that a bucket of fried chicken could be a decent substitute for a Christmas dinner, and he took that idea to the market. The Party Barrel became a way to celebrate Christmas.

Another version, which KFC Japan told CNN, Okawara's friend, a nun who worked at a nearby school, asked if he would get involved in a Christmas party providing fried chicken. Knowing his business was on the line, Okawara agreed.

He went above and beyond to leave the best impression. He even dressed up as Santa Claus, danced around the classroom with a barrel of fried chicken and sang a song he made up for this occasion "Happy Kentucky Christmas".

Kids loved it so much, another elementary school hired him to do the KFC-themed Christmas party. Okawara realized that “Kentucky for Christmas” campaign could save his business.

He put Santa costumes on Colonel Sanders statues outside KFC stores and promoted KFC Christmas "Party Barrels" filled with Kentucky Chicken as a replacement to the American turkey Christmas dinner. 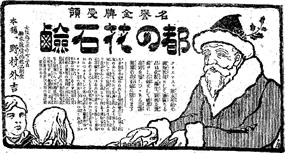 “Kentucky for Christmas” – a White Lie

With word of the KFC Christmas “Party Barrels” making their way across Japan, the national broadcaster NHK interviewed Okawara about his role in bringing the Kentucky Chicken to Japan with the “Kentucky for Christmas” campaign.

When interviewed, he was asked if fried chicken really was a Christmas tradition in the West. He confirmed, even though he knew it wasn't true. Unable to turn down such an opportunity, the young entrepreneur lied.

In the 1970s, KFC restaurants were seen as trendy and hip. It was a place you could bring your date there and not feel ashamed.

It has become a popular place, especially among young people. They fell in love of its taste, luxurious style, fashionable new food and the cool store décor.

Regarding Christmas, Colonel Sanders’s striking resemblance to Santa Claus, made the infusion an easy win.

The “Kentucky for Christmas” Catchphrase

The fried chicken party barrel ads went national in 1974 with the slogan "Kentucky for Christmas". The campaign was successful enough to ingrain in people's minds the connection between fried chicken and Christmas.

The simplicity of this message penetrated TV commercials, and appealed to people’s fascination with the western cuisine, in a similar fashion the West adopted sushi.

The KFC Christmas campaign lasted so long because the message was always the same: “on Christmas you eat chicken”.

A typical KFC Christmas ad from the 1970s or '80s featured a family enjoying a feast of golden, juicy, fried chicken with the song "My Old Kentucky Home" in the background.

These ads positioned KFC as a classy and authentic way to celebrate Christmas in a true American style - even if it wasn't true.

After WWII, western culture became trendy and many fast-foods, fashion brands, or overseas trips were in demand. So was Christmas, as a holiday.

After Japan surrendered in WWII, the country has been much reorganized. It became a democracy, the education system has changed, and cities got rebuilt after bombings. By the 1950s, the economy started taking off, and people had more and more cash to spend.

How much does KFC make on Christmas in Japan?

According to the KFC data, when the Christmas Eve was approaching in 2018, KFC Japan scored nearly 7 billion yen, which stands for around $63 million.

Since the first “KFC on Christmas” campaign, KFC in Japan makes about 5% of annual income each year during Christmas sales. 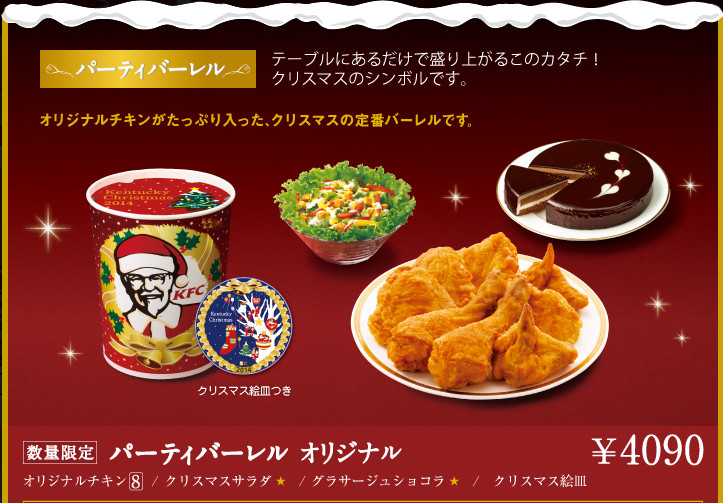 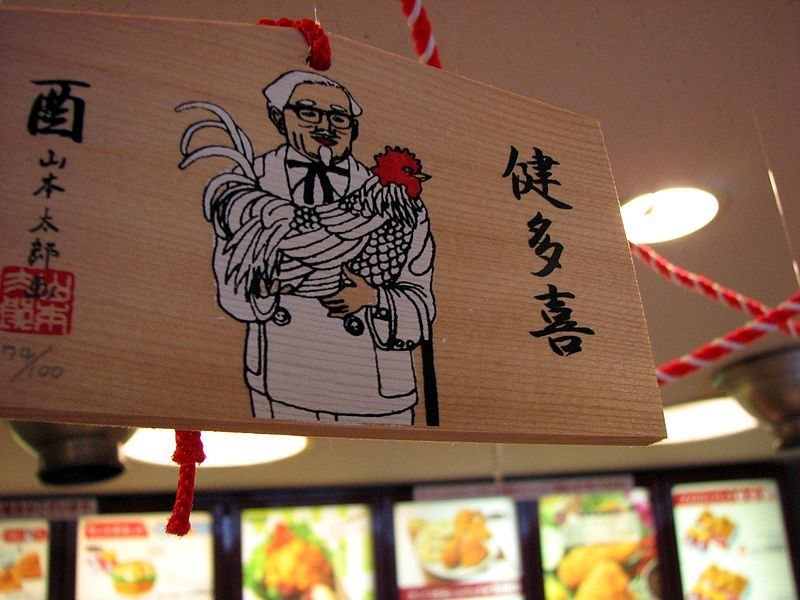 In Japan, there’s less than 1% of Catholics, so there was no Christmas tradition, but it got adopted with other aspects of the Western culture.

In 1970s Christmas was already widely used for seasonal marketing and the ad budgets quickly spread the idea to different parts of the world. Japanese got inspired by the Western tradition but could mostly rely on the commercial side as to how to spend it.

The KFC campaign only added the ‘traditional’ food to the buzz that had been already happening each year and answered one question ‘what should you eat on Christmas?’.

Sharing food is an important part of Japan culture, so an idea of party barrel had fit neatly into their dining culture. Fried chicken also resembles a popular traditional dish called karaage which comprises small pieces of panko-breaded, deep-fried meats, like chicken or fish.

In Japan, Christmas Eve is the best time in the year for a date. This is also why KFC got so popular. Lovers go to see illuminations, drink mulled wine or hot sake on festive markets, and eat out – KFC falls greatly in between all those activities as a hot meal.

“KFC is Christmas” ads usually came down to tell stories about bringing the party barrel home for Christmas. Stories carry emotions and can get internalized well – on a national level, after exposure to such a constant storyline, people started to behave similarly.

People tend to be extremely busy and working long hours in Japan. Christmas is not a national holiday, and there’s no guarantee that you would get a day off. Choosing Christmas KFC in Japan is just convenient – you leave work, drop by to get the chicken, and go spend some time with your loved ones. Looks like they don’t get the whole preparation part.

That kind of cultural naiveté, blended with savvy marketing and a sprinkling of star-studded TV commercials, has proved to be a winning recipe for KFC Japan. 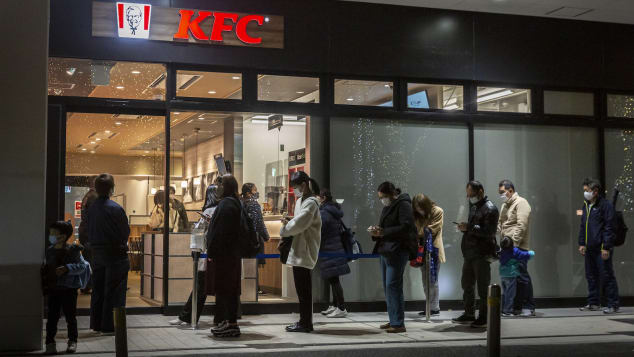 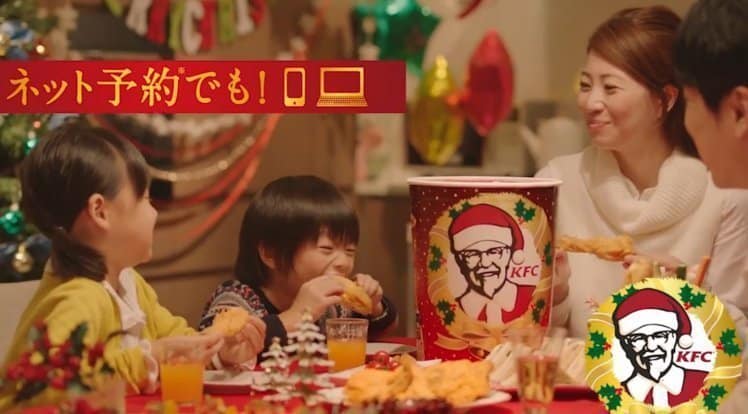 It’s hard to compete with marketing efforts done for decades but if we can learn from the KFC’s example, it’s being on the lookout for trends and what they’re missing. Fill the void, teach people how to use your product, convince them with a story, and it just might work.