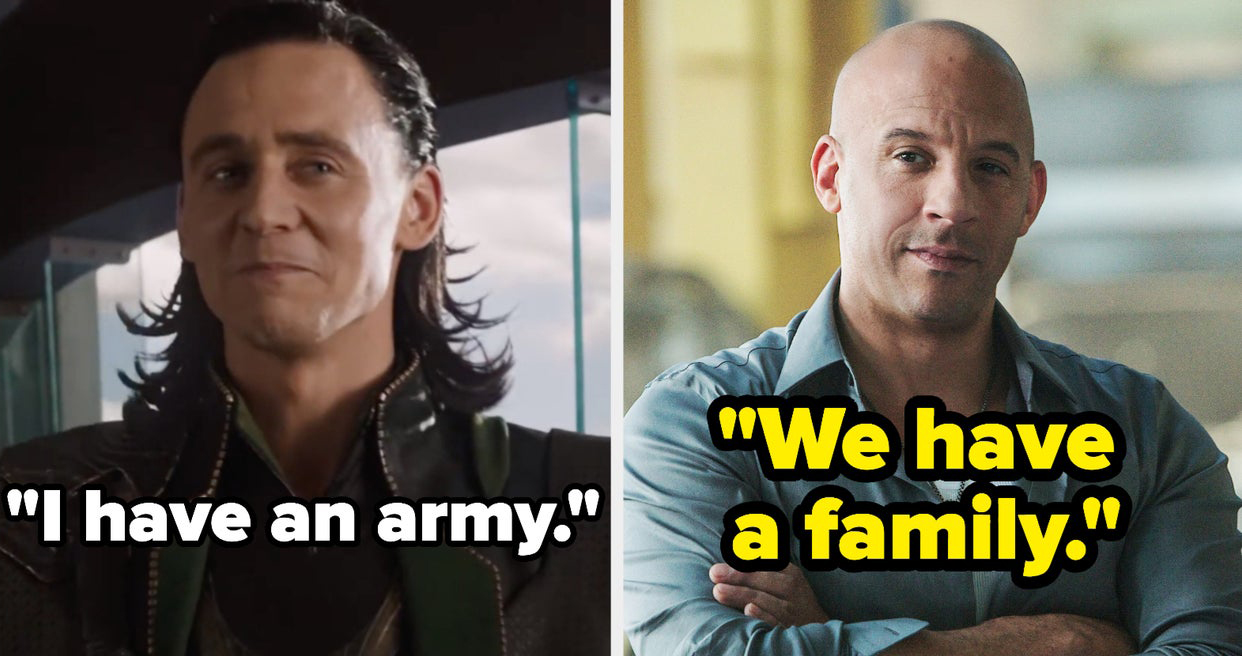 How Viral Vin Diesel „Family” memes promoted the movie - was it for real? (6 min read)

Everyone knows Fast & Furious has moved from movies about street racing, to superheroes franchise that happen to race and value family over anything. Many people joked about the ‘family’ thing in F&F–and quotes like „I don’t need friends, I have family”–but Insider’s video really set the tone for the conversation. And it counted using the word ‘family’ over 33 times.

It was 4 years before the memes and F9 release, but it could be eye-opening and memorable to some. Then, they were more familiar with this angle later on

The memes became popular shortly after the US official release of the movie. Fans had time to watch it during the opening weekend and then, the memes were sort of an afterthought. Still, they caught the wave of people sharing their feelings about the newest part of the saga. 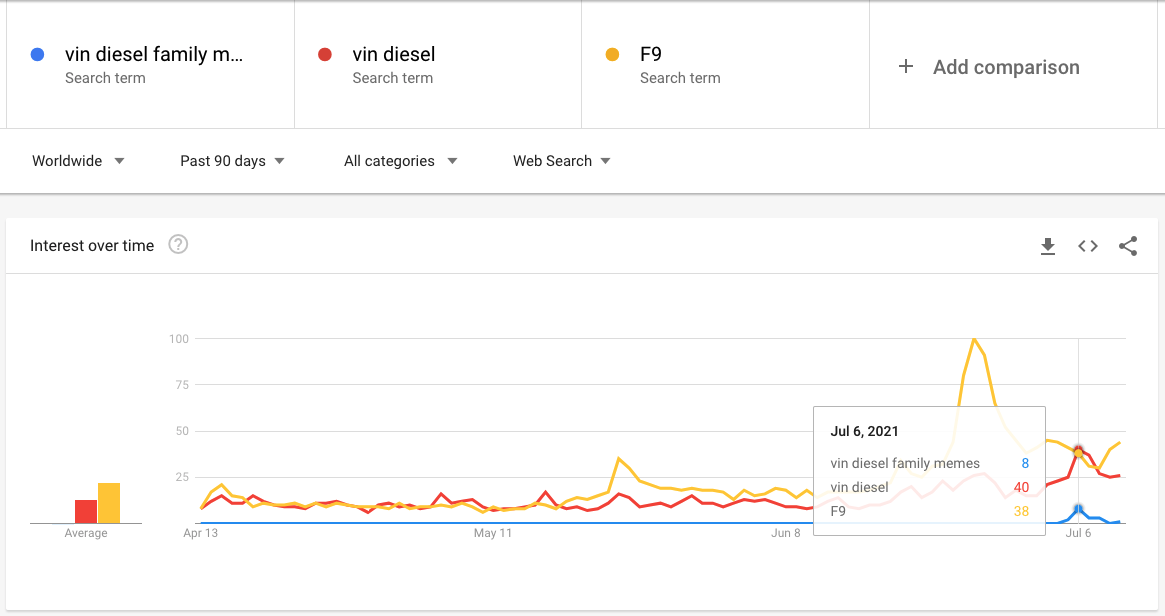 Why are family memes trending – Following a blow

As Gary Vaynerchuk stated, social media is like boxing, but it’s often not about the „Jab, Jab, Jab, Right Hook” but going after that right hook if it hit the target. In other words, any good social media manager knows that if one post shows better results, you need to follow it.

Geek Culture has nailed it with the first meme and recreated the success only 4 hours later. Knowing they were onto something, they carried the momentum and kept posting new Vin Diesel memes every day. And every single one made them more than 1k shares.

Twitter is a proven launchpad to memes and anything viral. Its users are usually present all over the social media platforms, but some chose to be more active in the ‘global village’ of Twitter–where anyone can share anything and get exposure to all platform’s users.

Sharing memes found elsewhere on Twitter is no new, but when many people do it, the hashtag or topic becomes „trending” and all the 330 million users (or at least the ones in your region) can see what’s hot now. Then, they can easily contribute to making that hashtag stay trending for longer. 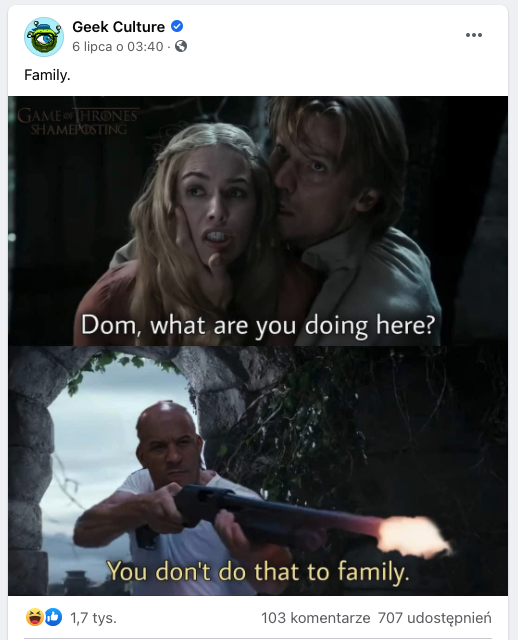 What is hilarious here is putting Vin Diesel in the context of other popular titles. No one messes with his family in Star Wars, Lord of the Rings, Jurassic Park, Game of Thrones, Avengers etc. That makes it more relatable to even those who aren’t the biggest fans of F&F, but love the other movies. And makes it more funny, too!

Media make ad money from traffic they get, and jumping on a trend to ride it in SEO is one way to do it. Once the memes were all over Twitter, some media took the story to their sites, answering keywords like „vin diesel memes” and channelling part of the interest to their outlets.

Why is Vin Diesel in family memes?

Vin Diesel is one of the protagonists of the famous “Fast & Furious” series. In the movies, he can often be heard talking about how “family” is important, by which he not only means his actual family, but his “gang,” which is very important to him. 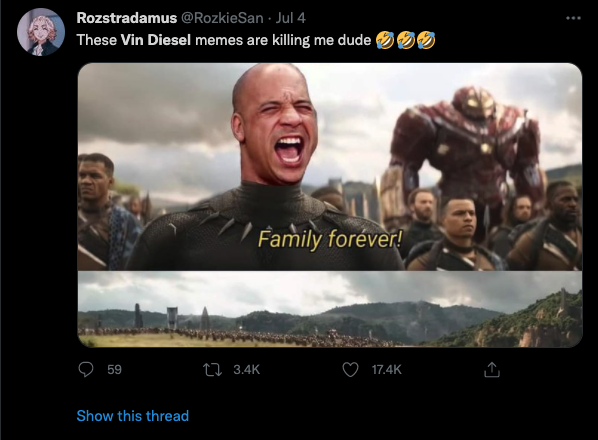 We’re more likely to act upon things we are familiar with. Getting exposure to the campaign around F9 release and knowing the ‘family’ theme in the franchise, people were more keen on sharing the memes.

Seeing Vin Diesel catch falling Mufasa (Simba’s father, from Lion King) is like the definition of bizarre. These out-of-context viral Vin Diesel family memes memes are taking the internet by storm for a reason – they get quickly remembered.

People’s current emotions influence their decisions. Laughing out loud because of a meme you saw? You’re likely to pass it to others, so they can laugh too.

Why are family memes trending: a trending meme is what every social media manager hunts for. When it’s there, they drop everything to catch the wave and use the meme for their brand purposes. That also helped it thrive.

The viral Vin Diesel family memes worked because they were funny, but also because it occurred around a bigger event that was related–F9 release. It always needs a portion of good luck, but what is in your hands is following the trending post. Geek Culture has done that well, helping ‘family’ memes to spread through their brand and then getting its own life on Twitter.

If there’s something you can copy here, it’s this–use humor on social media and if it sticks–drop everything and squeeze whatever there is in the post to make it go viral. That’s the usual preaching of Larry Kim seen in the wild.