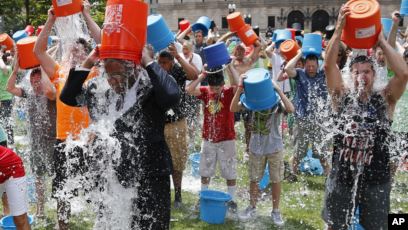 The Ice Bucket Challenge was a campaign to promote awareness of ALS disease and encourage donations for research. It was about dumping a bucket of cold water with ice over one’s head. That person then nominated a minimum of three other people to do the same thing. There were 24 hours to complete the task.

The Ice Bucket Challenge viral raised over $115 million for the ALS Association and over $220 million worldwide.

The ice bucket challenge trick itself only asked participants to pour a bucket of ice-cold water and donate. The rules were simple and clear – donate or do the trick and dump it on your head. Yet, it was a bucket of ice-cold water! It wasn't that easy, so it required some “skills,” or rather – strength and resistance. Participants had 24 hours to accept and complete the challenge – there was a sense of urgency, and a possibility of losing.

How did the ice bucket challenge start?

Primarily, the ice bucket challenge was supposed to raise money for people suffering from ALS, a serious and lethal disease. You donate some money to a charity, or you pour icy cold water on your head.

Celebrities and athletes were the engines behind the campaign, they have really driven up the number of shares and follows. Athletes were great for this campaign because they usually have a big and engaged fanbase.

Participants were asked a minimum of three people to take up the challenge – 3 people would ask another 3, and so on - this would create a viral loop. This was the viral factor. Without it. Not as many people would join the challenge.

As for the ice bucket challenge cause, the whole event was of a great help for the various charities. It’s not only that you focus on selling and buying things when you are dealing with marketing.

The challenge helped the ALS foundation drastically increase their income. According to the ALS blog, before the ice bucket challenge craze, the foundation’s revenue was on the level of about $20 million yearly. Four years since the challenge (2019), this was about $28 million.

Although the original challenge was inspired by people struck with ALS, later ice bucket challenges spread to other topics, such as helping lost animals. Moreover, the psychology of the whole thing worked magic thanks to strong emotional factor, and many participants would have donated some money even if they had dumped the ice on their heads. Nobody wanted to be that “greedy Grinch.”

By raising the money for the ALS research, the ice bucket challenge struck the right emotions with the audience. It worked well thanks to human psychology. Fighting against a lethal disease always looks good and attracts attention.

There wouldn't be much of a challenge without proof. The video made its evidence purposes. It was a kind of element of the whole game.

The urgency factor is extremely powerful in marketing. 24 hours for taking up the challenge is not much. The stake is high, so nobody wants to let others down.

The nominations were announced on video and published on the social media. People were forced to take a part in the challenge, otherwise, they would be called out. It was also quite embarrassing to be nominated, and refuse the challenge. Some people even donated despite earlier dumping the ice-cold water on their heads, so as not to present themselves as greedy and selfish.

There wasn’t anything like that in the history of the Internet. People did a lot of strange and unusual things, but pouring icy water or dumping a bucket of ice on oneself for the sake of people in need was something new. 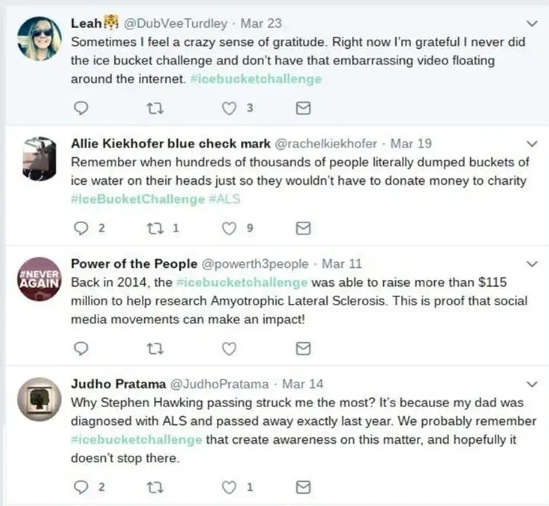 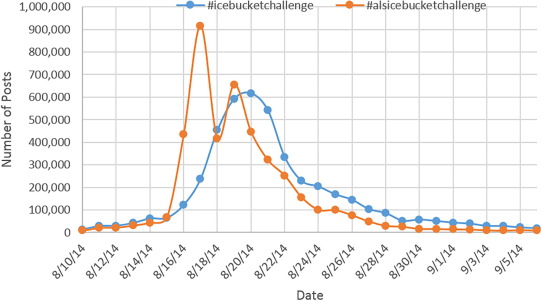 Pete Frates, a 29-year-old former baseball player, became the face of The Ice Bucket Challenge. The young man, cut down in the prime of his life, with a disease associated with another, more famous baseball player. Soon, more people struck with ALS became being recognized as living symbols of the whole phenomenon. Each person has their own story to tell.

Many celebrities do the ice bucket challenge trick. The combined effect of the everyday person participating with the appearance of celebrities doing the same things boosted the success of the campaign.

People and companies, whose actions are to be undertaken for a greater cause, became better in the eyes of their audiences. Noble goals also gather more participants and volunteers. This is because such events boost people’s self-esteem.

One great cause that united the whole world. There were no countries, no gender, no color, no religion. Just humanity, and its fight with the disease. The cause and effect of the challenge were clear and people were able to get behind it without any moral ambiguity. This feature also gives good feelings to people from doing something which benefits others.

There is also the authenticity of seeing proof of the challenge. Watching people screaming while they were being doused with ice water on their heads was a meme itself. People were watching it for fun itself.

It was authentic. People found the ice-bucket challenge to be genuine. There were no paid advertisements and pushy tag-lines. It consisted of real people, many of the people we knew, doing something real that we could emulate.

The desire to join a movement that “everybody” is doing is compelling to people, especially if this act involves something that benefits others. This is referred to as prosocial behavior, which generally inspires others to join in. 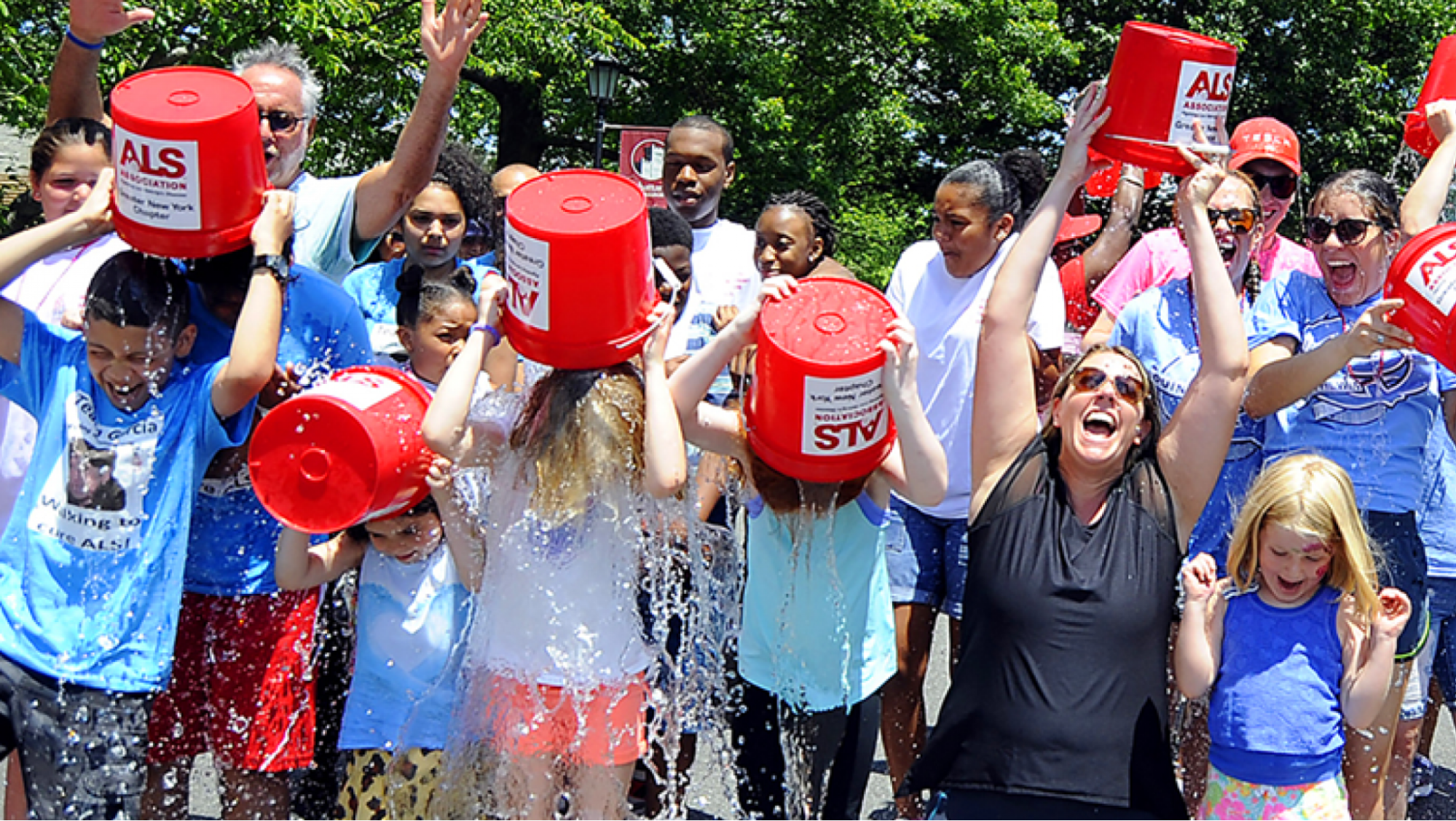 Marketing is not only about selling stuff. People in a struggle with their health are quite a hype-friendly topic in many marketing situations. Most charities operate on similar psychological mechanism in people. The ice bucket challenge simply hit the weak spot, but the intention was clear and beneficial. The ALS foundation scored major earning thanks to the whole event, and other charities followed in later iterations of the challenge when nobody really remembered where it came from.

The ice-bucket challenge is described as “viral marketing gold." It was one of these phenomena that's not easy to forget.

Many people tried to copy the success of this campaign, but none of them copied the scale.