Stranger Things – a Netflix hit that about a group of kids encountering some paranormal activities. It plays heavily on 80s nostalgia, described by Netflix as ‘a love letter to the supernatural classics of the 80s’. 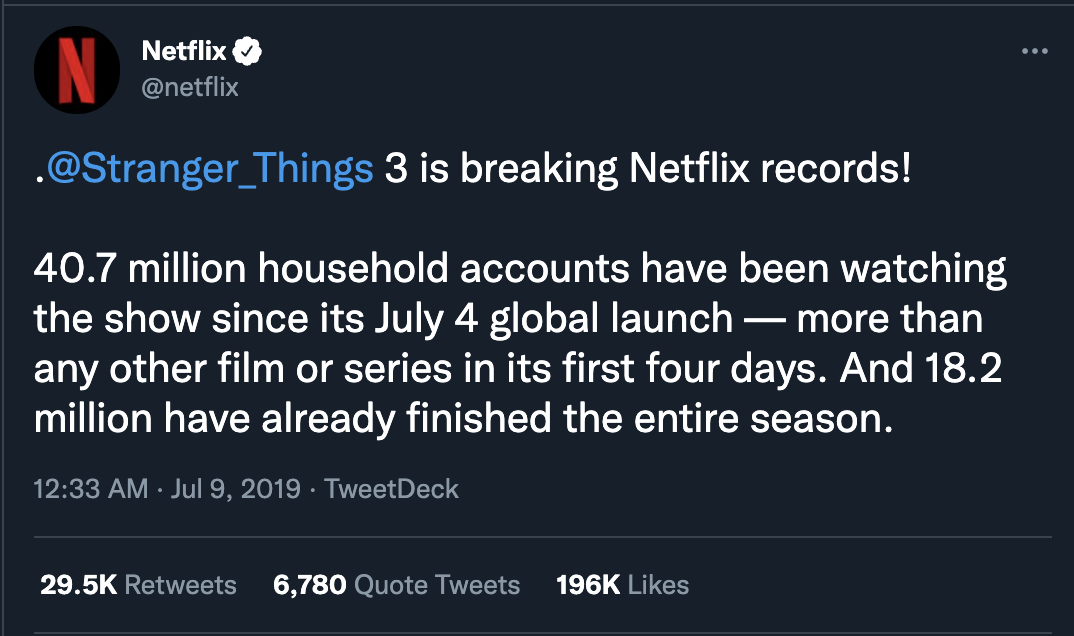 Marketing strategy for Stranger things – Building and understanding the audience

Netflix was already huge before Stranger Things was released.

In Q2 2016, they had almost 80 million active users and large social media channels – the Twitter account already had over 2 million followers.

Netflix is in control of their audience data and the platform the users log into, probably every day, or at least every week.

That means by applying big data analysis, they know what their audience prefers and can advertise to over 80 million people within the platform. For Netflix, that’s for free. High-budget productions such as Stranger Things have an easy discovery path thanks to that.

Why was Stranger Things so popular – Nostalgia

Nostalgia is probably one of the most powerful aspects of Stranger Things. It recreates supernatural movies from 80s, like The Goonies, or E.T. and builds a lovable portrait of the 80s in general – with all the fads, trademarks, fashion, etc.

Because of that, it’s very attractive to people who lived in 80s and 90s, being influenced by this culture in their youth.

It doesn’t have to be a coincidence either. Netflix could check that a large portion of platform users are people who’ll have positive memories around the 80s and the movies of that decade. 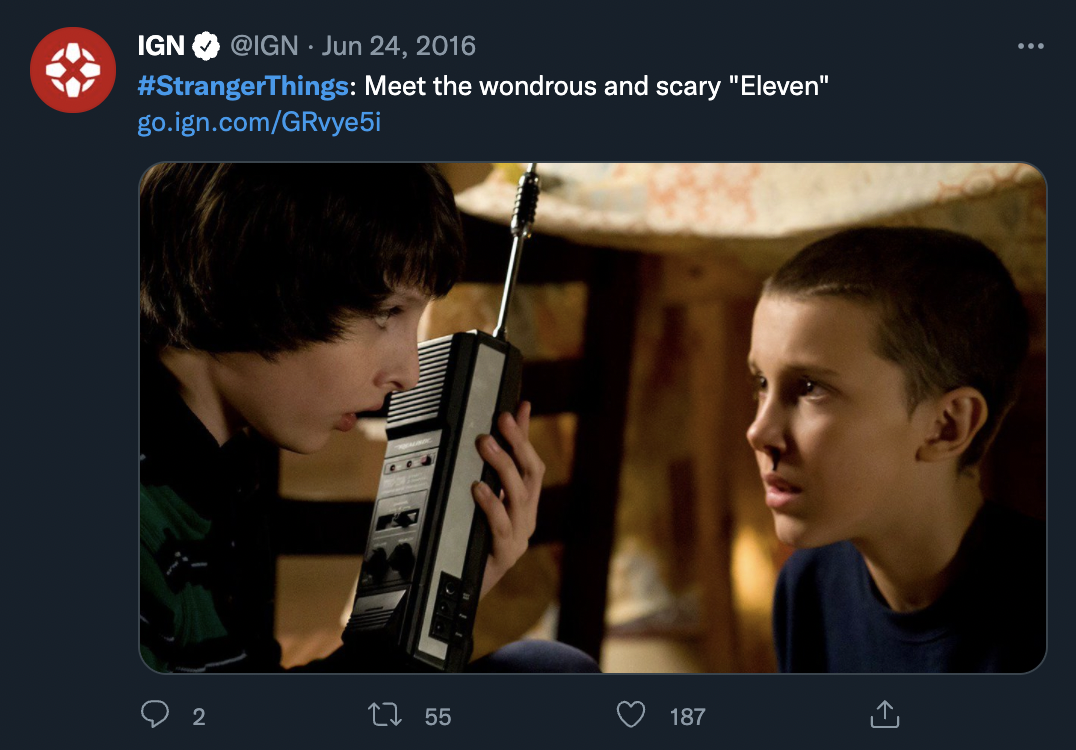 Netflix had a great idea for releasing TV series. Releasing episodes week after week is risky, because if the first one wasn’t that engaging, part of the viewers won’t ever watch the second one. Waiting for over a week also makes the watching experience less engaging and someone can simply forget about what he watched the last time.

Releasing all season episodes at once gives the viewers choice – to watch one episode, a few, or the entire thing in one sleepless night. This keeps the audience glued to the screens and makes the whole story more powerful and memorable.

Word of Mouth – why is Stranger Things so popular

Stranger Things high popularity is, among others, because of word of mouth. Imagine that 80 million people around the world get Stranger Things in their Netflix’s home screen all at once. Some will watch it straight away, some will keep seeing the ad but won’t act immediately. There’s a large chance you and your friends have Netlix.

Those who watched Stranger Things mostly recommended it to their fellow Netflix users. In that same group, someone might not have Netflix subscription, but they’ll buy it just to watch Stranger Things based on their friend’s recommendation – and then, they’ll stay to wait for the next seasons and will be lured to watch other Netflix originals in the meantime.

Now, onto the aspects that make Stranger Things so good, for so many.

Stranger Things is great at storytelling that resonates with audiences with different tastes and backgrounds.

There’s one story that has it all:

None of the storylines is taken too far and all is balanced to attract as much viewers as it can.

Each episode ends with a cliffhanger that will make you want to watch that one more–and it’s really hard to resist. This is done in many TV series, but Stranger Things does it in perfect moments.

How was Stranger Things marketed – Teasers to start conversations

Similarly, all seasons were announced with trailers that didn’t tell much, but raised questions and gave hints to what is the show about and what can the next seasons feature. For fans, this is a way to start a conversation, wondering how the story can unfold.

Netflix has a huge marketing budget and to make their messaging and ads the most powerful, they release themed content to local audiences. There were many promotional videos shot with celebrities from different countries, in their national languages. This allowed more people to get a better feel for the series.

Stranger Things was marketed through events

On some markets, Netflix promoted Stranger Things through interactive events – but that refers more to the later seasons.

For example in Poland, there were multiple marketing events promoting Stranger Things, like one when people were handed oldschool bikes, rode them to a deserted building where a set similar to iconic Stranger Things’ scenes was organized.

Netflix understood what Disney and others alike do the best – they don’t invest in movies. They invest in IP which they can monetize in numerous ways. Marketing strategy for Stranger Things was that it was made to become a huge franchise – one worth over $20billion.

You can buy Stranger Things licensed products everywhere – T-shirts, sweatshirts, LEGO sets, download a game, and many more. This keeps the momentum between season releases and engraves the brand in its audience. Decades from now, we’re still likely to remember Stranger Things.

How much money did Stranger Things make?

As of 2019, Stranger Things has made about $378 million worldwide. The same year, Netflix reported an increase in profit to $665 million, $5.2 billion in revenue. 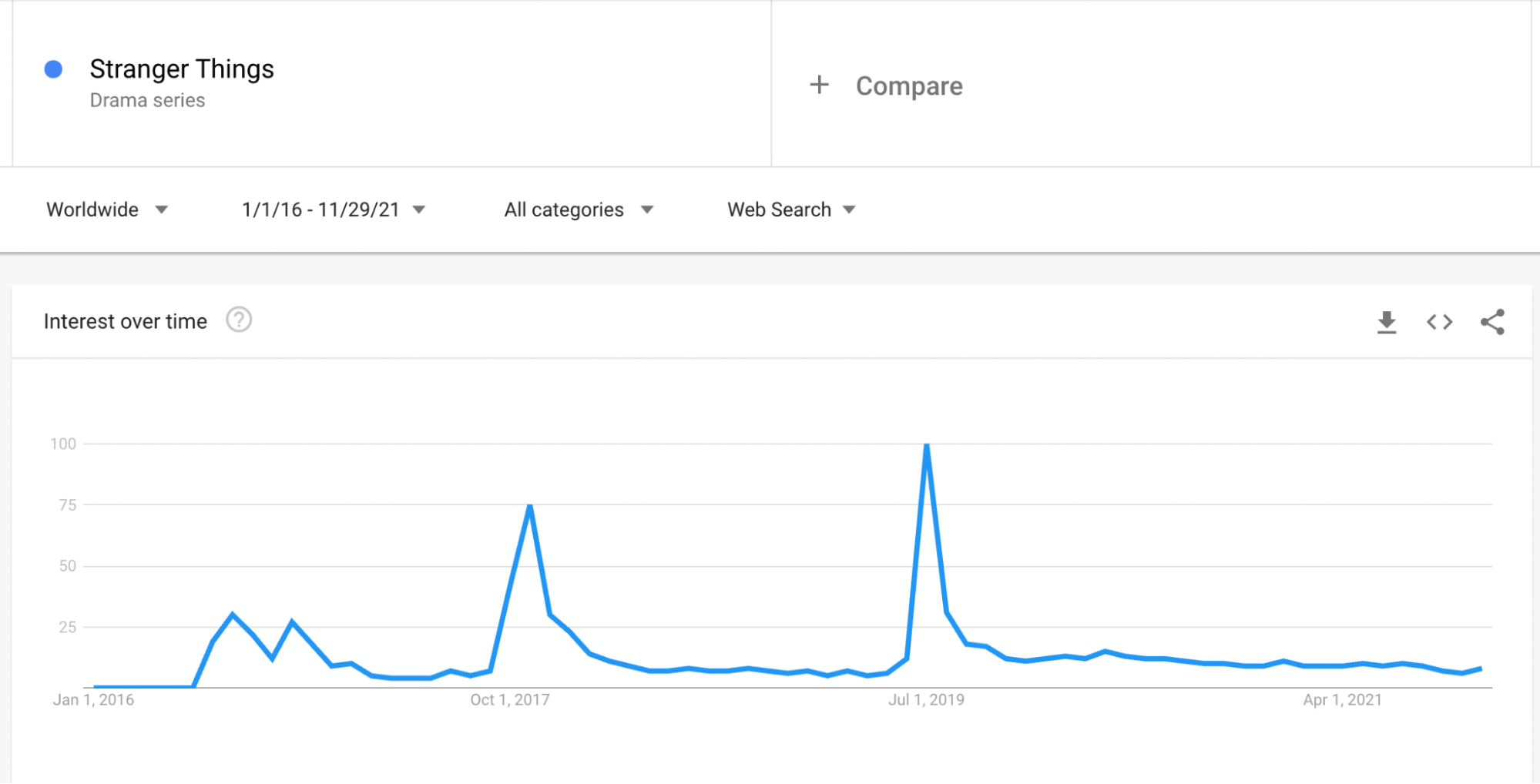 Each new season is more popular due to the feedback loop.

There’s nothing more captivating than stories. They carry emotions and are more memorable and engaging to humans. Stranger Things storyline is highly engaging.

At later stages, social proof could be one of the driving forces for new Netflix users and Stranger Things fans. Many people around the world discussed the series in many online and offline places, creating the overall buzz.

People have a deep desire to seek out missing information. This is why cliffhangers are so effective – the action is paused in a situation that is about to unfold. It’s hard to resist watching the next episode to find out what happens.

Tasks that were interrupted are better remembered by people. This is why cliffhangers also work in a way that people come back to watch the next episode later.

The more we see something, the more we trust it. When Stranger Things was first advertised within Netflix platform, some people could see it every time they launched the app, get familiar with it, and then trust it enough to watch the pilot.

Stranger Things is not that serious. There are multiple situational jokes and funny situations that make the story more human and more memorable.

Feelings of nostalgia make us spend more money but also invest our time to engage with a movie or TV series. Stranger Things is all about nostalgia. 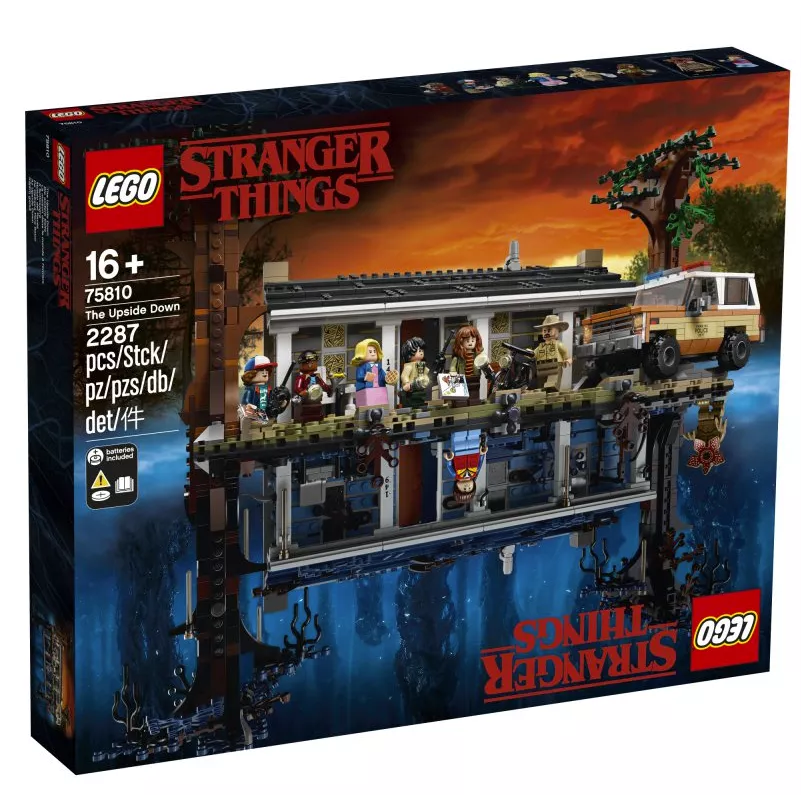 Stranger Things is a success of multiple marketing activities but there were too foundations. First, Netflix already had a huge audience that it could serve new content to. Even if 1% would see the new series on the platform, that would still be 800,000 fans to pass the news further. But that was a much larger group because the content itself was great. Stranger Things were highly attractive because of that nostalgic, 80s sci-fi vibes you could feel since the first teasers.