Slack – officially launched in 2014, it is a service providing a messaging platform, integrating and unifying a wide range of communications services such as Twitter, Dropbox, Google Docs, Jira, GitHub, MailChimp, and more.

How Slack got their first users is a hit. It was all started by a group of Silicon Valley entrepreneurs, including the founder of Flickr, Stewart Butterfield. Some major brand-name customers include Adobe, Samsung, eBay, IBM, and even NASA.

2012/2013 was the perfect time to launch a product like Slack because at that time people were starting to get tired of emails and overflowing email boxes. Slack launched a brand-new communication tool, capitalizing on people’s email frustration. That was at a time, where there

Slack has been initially launched as a preview. The project’s website was just a short landing page where you could leave your email and company name. Participants were selected and got $100 credit for that.

That was a beta, but it wasn’t named like that, so people wouldn’t be worried about bugs or unreliable service.

How Slack got their first users – market testing

Launching a product through a closed beta has the advantage of having a controlled environment, but the website claimed that participants would be selected. At this point, they could not have a ready product, but such a website allowed them to test the market response.

Going through the initial 15,000 sign-ups took 6 months. The Slack team has carefully read every piece of product feedback and made sure the experience of the product will be perfect when it’s launched to a broader market.

How did Slack manage to get 8000 customers within 24 hours

The short answer is: they focused on their users’ feedback. Slack’s initial fast success is a proof that people still rely on their friends’ and colleagues’ opinions.

Since Butterfield wasn’t new in the world of business, he used his contacts and connections in many companies, to send the word out and inform as many people as possible about the new platform.

Thanks to that, 8,000 people signed up on Slack on its very first day.

To achieve it, they:

Slack was advertised in a way that allowed you to get the benefit instantly. The first selling points were around knowledge management and making every team communication searchable and easy to retrieve.

Slack was first advertised this way:

„Slack is free to use for as long as you want and with an unlimited number of people”.

It was an important part of Slack marketing strategies. Making a product free was a great choice from today’s perspective, as it allowed the platform to grow faster. Eventually, the free plan got limited and Slack started to charge for features for scale-ups and enterprises.

Customers’ success stories published on Slack's website have always been served in a simple, but visually attractive way. They use segments like key takeaways, global polls, and others, that grasp attention. They have a blog, offer e-books and other resources. The content is interactive and overall well-designed, using keywords and achieving a high link score.

In the early days, Slack thought that in each team that will try to move to Slack, one veto can make the whole team go to another solution. This is why they put an emphasis on educational material around how to use the tool, how it works, what should you do with it, so every individual that reads it has the ammo to convince the team.

That also worked on the enterprise level. The communications were focused on teams rather than whole organizations. For example, one team in Adobe decided to try it out, but eventually, that led to buying 9 paid plans within this organization. That lowered the effort to start using Slack.

That part of content marketing deserves a separate section. Slack built more hype around it with a Wall of Love which was a list of testimonials written by happy users on Twitter. 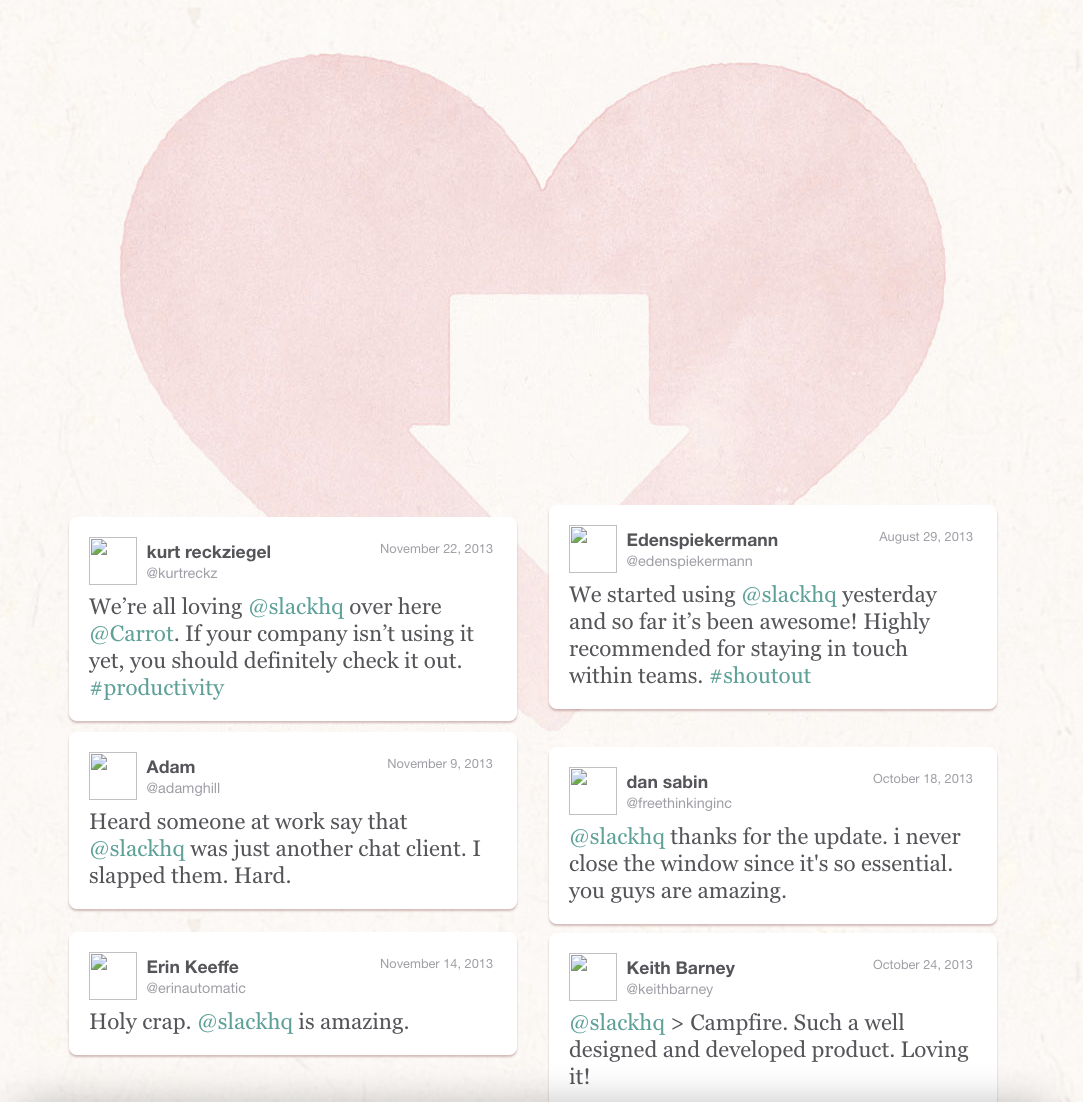 Instead of hiring a sales team and marketers, Slack focused on providing the best product while lowering all possible barriers and simplifying communication. When visiting Slack’s website, it’s possible to notice only one, straightforward CTA. Every bit of work and effort went into making the product as perfect as possible so that it’s able to speak for itself.

Everything the team does is supposed to be aimed at a bigger purpose. Releasing one new feature a week doesn’t mean anything if it’s not combined with actually taking care of users’ needs and constantly making sure their experience with the product is the best possible, on every stage.

Slack wasn’t the first product of that type, but it was the first one, to build a brand that feels friendly and fun. It made people wanting to interact with the brand, which fueled Slack’s marketing and sales efforts, without having to invest in dedicated marketing and sales teams. Moreover, from the beginning, Slack put a lot of effort into making customers’ experiences memorable and pleasant, from the first time they visit the website to the moment when they start using Slack daily.

The team’s previous experience has made them contacts to journalists. They were keen on covering the next venture of Flickr founders, which gave Slack a solid boost from the first day. In an interview, Butterfield said that they started doing PR for slack months before the release and continued for weeks afterward.

The press coverage was about 20% of the success, and 80% were actual people who shared it with their social networks. They leveraged that as a brand and shared every new coverage.

Slack launched with a group of three people in the customer support, but that later rose to 18 and beyond. A third of them work 24/7 on Twitter to respond to any kind of issues with the product. 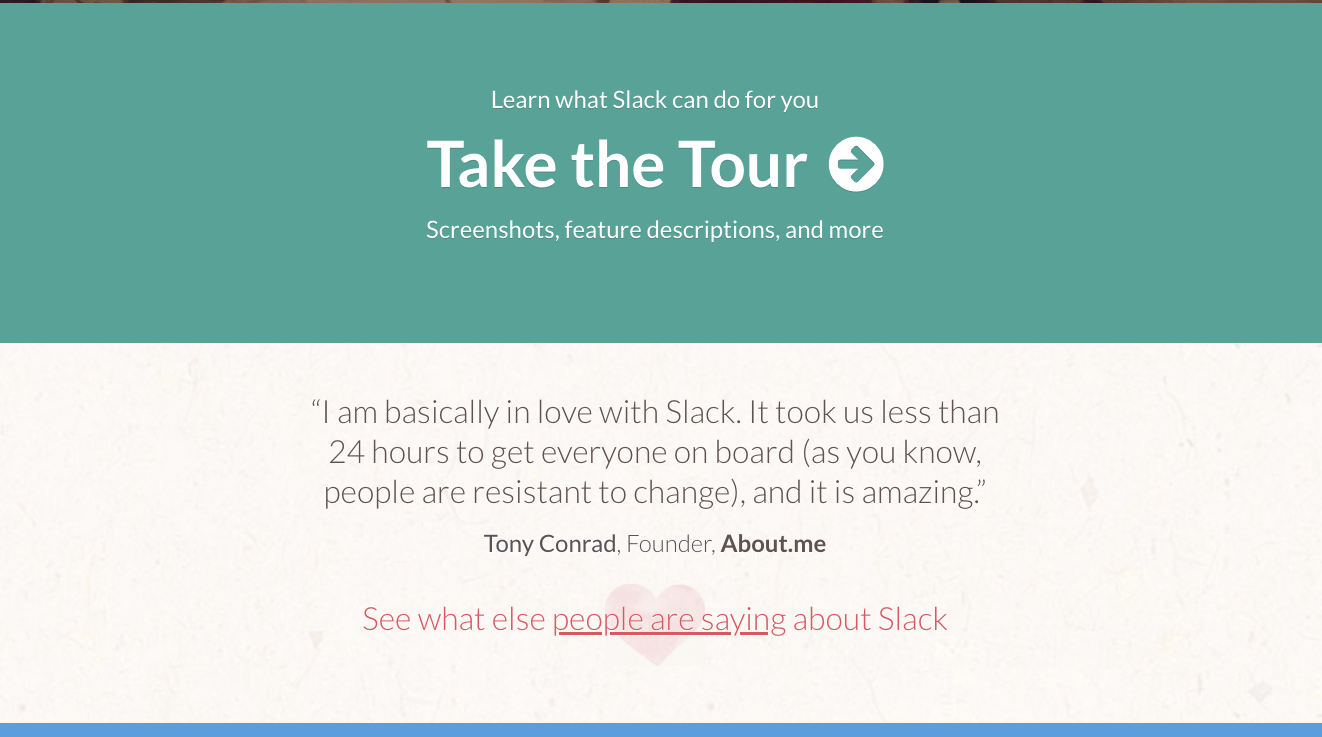 Because of the business contacts, Butterfield could use right at the beginning of Slack’s existence, many people signed up in the very first few days. That was followed by positive feedback and passing the word to other companies and businesses. Because we tend to value other peoples’ opinions, thinking they have more knowledge than us, we are influenced by their actions and take similar ones.

Slack’s team took good care of adding new features regularly. Updating a product generates excitement simply because it’s something new. It increases interest and, in effect, subscriptions to the app.

We base our perception based on selective information we have about something, often positive ones. Because opinion about Slack was overwhelmingly positive from the start, many people decided on subscribing without thinking twice.

We are taught to obey and follow authorities. In this case, in the business world, that authority is held by giants, like for example IBM, a customer of Slack. Smaller and medium companies won’t question choosing Slack, since successful, big sharks use it.

Our brain retains information better if it comes in the form of images. Visual sources have a much more lasting impact on us. The way Slack, its website, and blog are designed, appeals to its users because the way in which they serve the information makes it easier to digest.

Actions and items are perceived differently, depending on the frame. Slack launched as an early released but naming it a beta would scare off some users. This is why it’s been called ‘preview release’ and many other companies follow this path.

Slack is a solid example of doing everything right, even if they did wrong. That’s taking care of user feedback and prioritizing customer support, so if anyone complains, he’s quickly comforted.

When it comes to the launch strategy, it’s simple. Leveraging PR in 2013 worked well but it still does. Having previous experience is also important here and without media relationships, Slack could’ve not took off like it had done.

Also, engineering the product to drive adoption in smaller groups and aligning marketing to that can be considered as the major growth driver. And lastly, what’s a better way to sell a product than through making an approachable brand that made product users their evangelists?