Purple mattress commercial – a web-only mattress retailer that thanks to scientific approach to making viral videos has made $75 million in sales during the first year of its operations.

There’s some science to the mattress, and there’s definitely some to how Purple makes viral videos – this is what Purple mattress commercial case study shows. They launch some shorter, lower-budget hero videos and then use the ones that gained the most views for promotion on a larger scale. They even test only the intros and outros – about five or six of them – to choose which gets skipped the least as a YouTube pre-roll.

That was the case with Raw Egg test – it didn’t go that well on the first try but after it gained millions of views, they continued on that topic and made the experiment part of their communications. 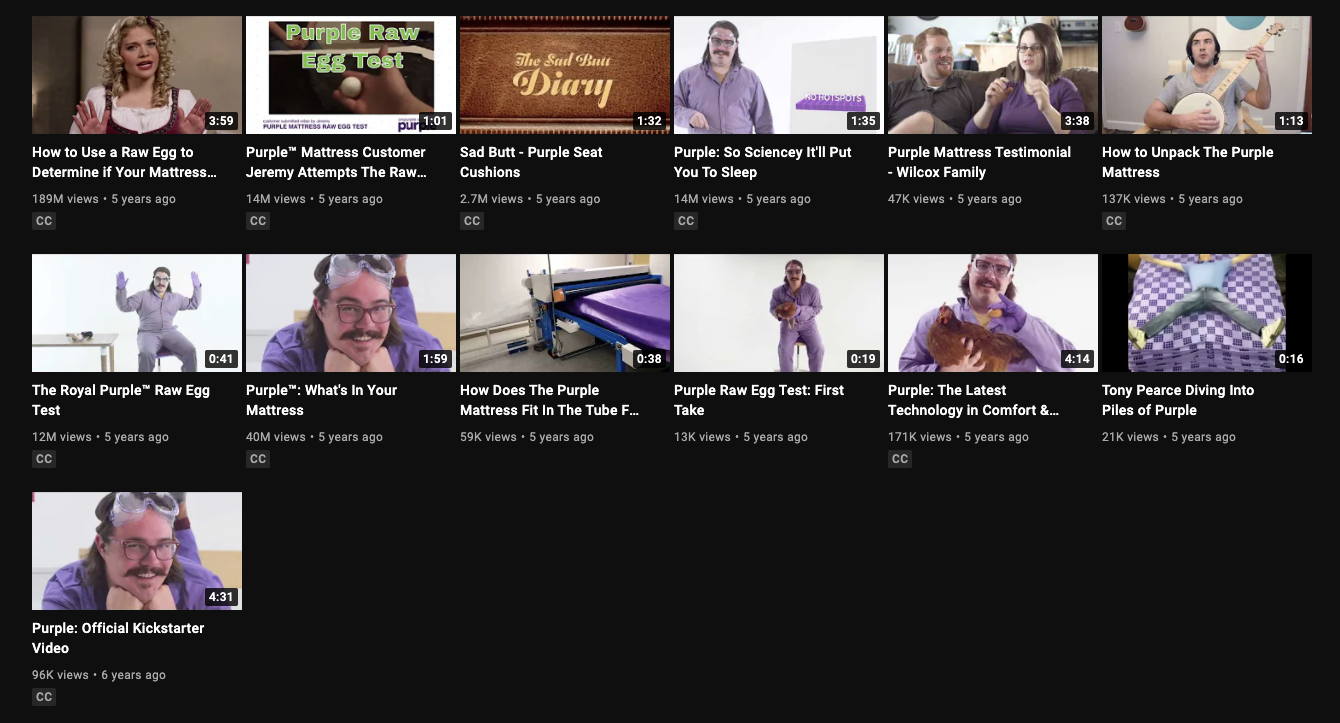 Some Purple mattress commercials are contextual to what’s trending. For example, they created a Super Bowl-related ad on crying to sleep in a comfortable bed. It was targeted at Atlanta, as their team lost the game. This is a tried and true approach to making a connection with your audience.

Purple simplifies the logistics by being the retailer and manufacturer – you can only buy them directly, on their website. This would be a blocker for some clients, but they get a 100-day satisfaction guarantee. This removes the obstacle and leads to that fruitful $75 million in the first year.

Actually, the guarantee is not for 100 days. It’s for 100 nights. When we stumb upon a Purple mattress commercial, it will say something like „the most comfortable mattress you’ve never tried”, „so sciencey”, and many other fluffy words. That all contributes to a humor-led brand that makes science-backed product feel more appealing and human, and less tech-oriented. Most of the business owners would go the second path, which is why Purple really stands out.

One Purple mattress commercial got over 80M views, but not only with praises. It was widely commented as the ‘scientific research’ that it portrayed was not really that scientific. They used a different mattress as that sent to clients,

Such a flaw didn’t stop the commercial from its viral spreading, and it could actually help it, but that’s a risky tactic that can hurt your brand. 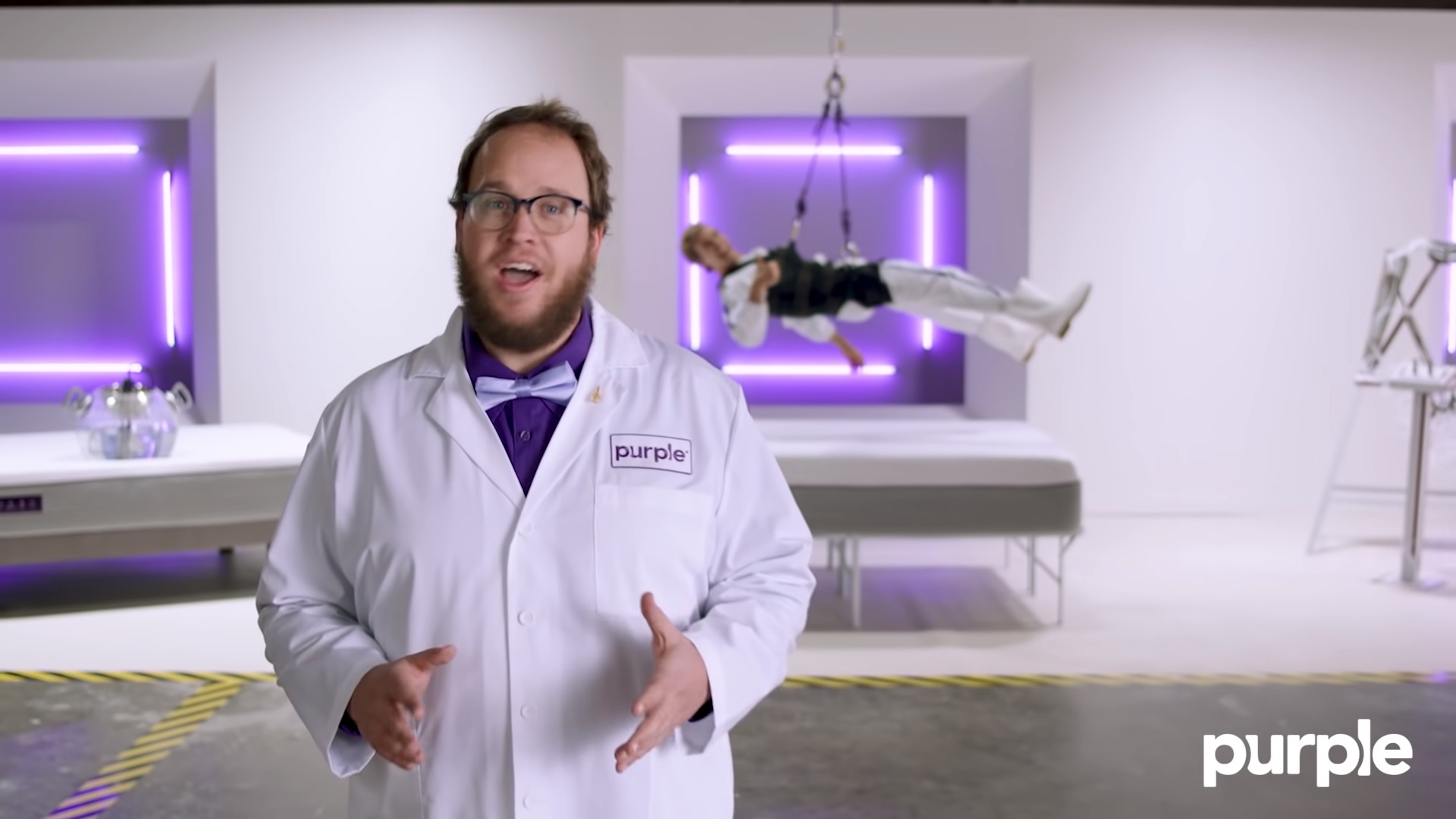 Purple invests a lot into advertising their videos, and that's what constitute their viral marketing. They do it on Facebook, YouTube, Instagram, and on external adtech platforms, such as AdRoll.

About 40% of the sales come from mobiles. The team noticed that many purchases are made in a client’s bedtime – they feel uncomfortable, and they order their product. Because of that, the website is responsive, loads quickly on mobile, and has quick checkout with Amazon Pay and Apple Pay.

Purple is all about videos and commercials. They even formed an in-house video studio with two full-time cinematographers. That contributes to the sales, too – the explainer videos are used on the website and the company’s data shows that if one watches it on the e-commerce site, he’s 4x more likely to make a purchase, which winds up the whole viral marketing even more.

Who made Purple mattress commercials?

Well, the Harmon Brothers, of course! They're behind a lot of successful marketing campaigns, and they've done tons of videos for various brands. Any Purple mattress commercial may be a great example of the Harmon Brothers' style and humour.

What they do are called infomercials. It means that such ads not only are attractive for the viewers' eyes, but also convey some useful message and knowledge.

Purple’s approach could be named as edutainment. When you see a Purple mattress commercial, you can be sure that It explains certain sleep problems and it isn’t either salesy with communications. That makes for building brand and keeping the audience engaged.

The project funding came through Kickstarter. Thanks to that, Purple had more budget to promote, but they went to Kickstarter with their standing out branding and brand heroes. Actually, they did it for product launch, as the audience on Kickstarter loves such high-tech products for everyday use.

Purple started by working with influencers – they sent them a cushion with their technology to try the raw egg tests for themselves. They chose 7 smaller Facebook pages – moms and lifestyle that recorded video. Each feature gained about 5-20k views, totaling at a reach of about 35k–140k views. That was enough to get this thing going.

It’s not that Purple came out of nowhere. It has been founded by Tony and Terry Pearce, two brothers who invented Floam, the world’s lightest weight cushioning fluid, used by – among others – Nike for footwear and Hill-Rom for medical beds. The technology behind Purple has been created around 1990s by those two gentlemen.

The creators of Purple were sure that once someone uses their mattress, they’ll want to tell about it to their friends, family, and neighbors. This could be one of the channels to promote the product

Brands that use humor are more memorable but also relatable. It connects the brand to positive feelings, which make for a well reception.

Bizarre things are better remembered. And dropping a human being on a mattress to check if eggs crack or don’t is quite bizarre.

The Kickstarter page had a large section of early user testimonials. Getting other people’s reviews makes us more likely to buy because as humans – when in doubt, we turn to others, to see what is the herd doing.

Humor and science are not on the opposite ends. You can use humor to explain complex solutions in a way that is understood and remembered. That also has the sharing factor that can then translate to the viral effect.

On the other hand, Purple shows best that even if you want to be 100% creative, backing that with data can lead to significant results. Their launch strategy is pure growth hacking.