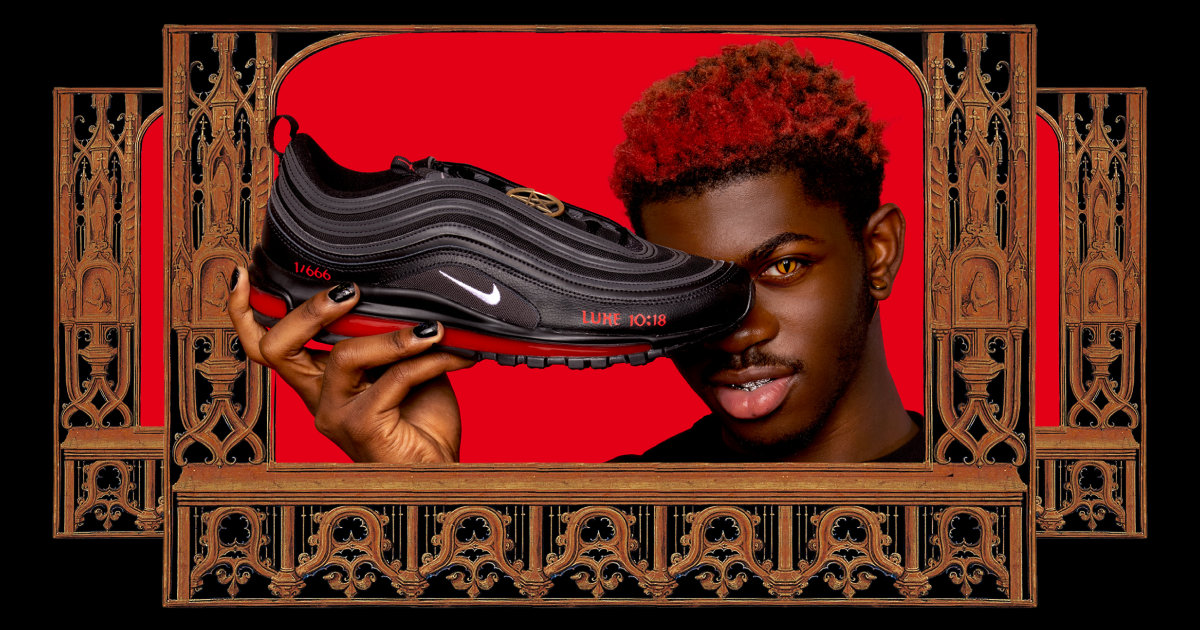 Satan Shoes – a limited edition Nike Airmax ’97 made in collaboration of Lil Nas X and MSCHF. They featured a drop of real human blood, a pentagram badge, an upside-down cross on the sole, and a reference to the Bible (Luke 10:18) about the Satan’s fall. They cost over $1,000.

How were MSCHF “Satan Shoes” advertised – A controlled leak?

Daniel Greenberg commented shortly after the shoes made headlines that although they leaked early on Twitter, they’d only be available from 29th of March. That’s still pretty close to the release, so the leak could have been controlled as a part of the MSCHF “Satan Shoes” marketing strategy. The hype culture is always on the lookout for leaks of new limited drops, so they can buy them. 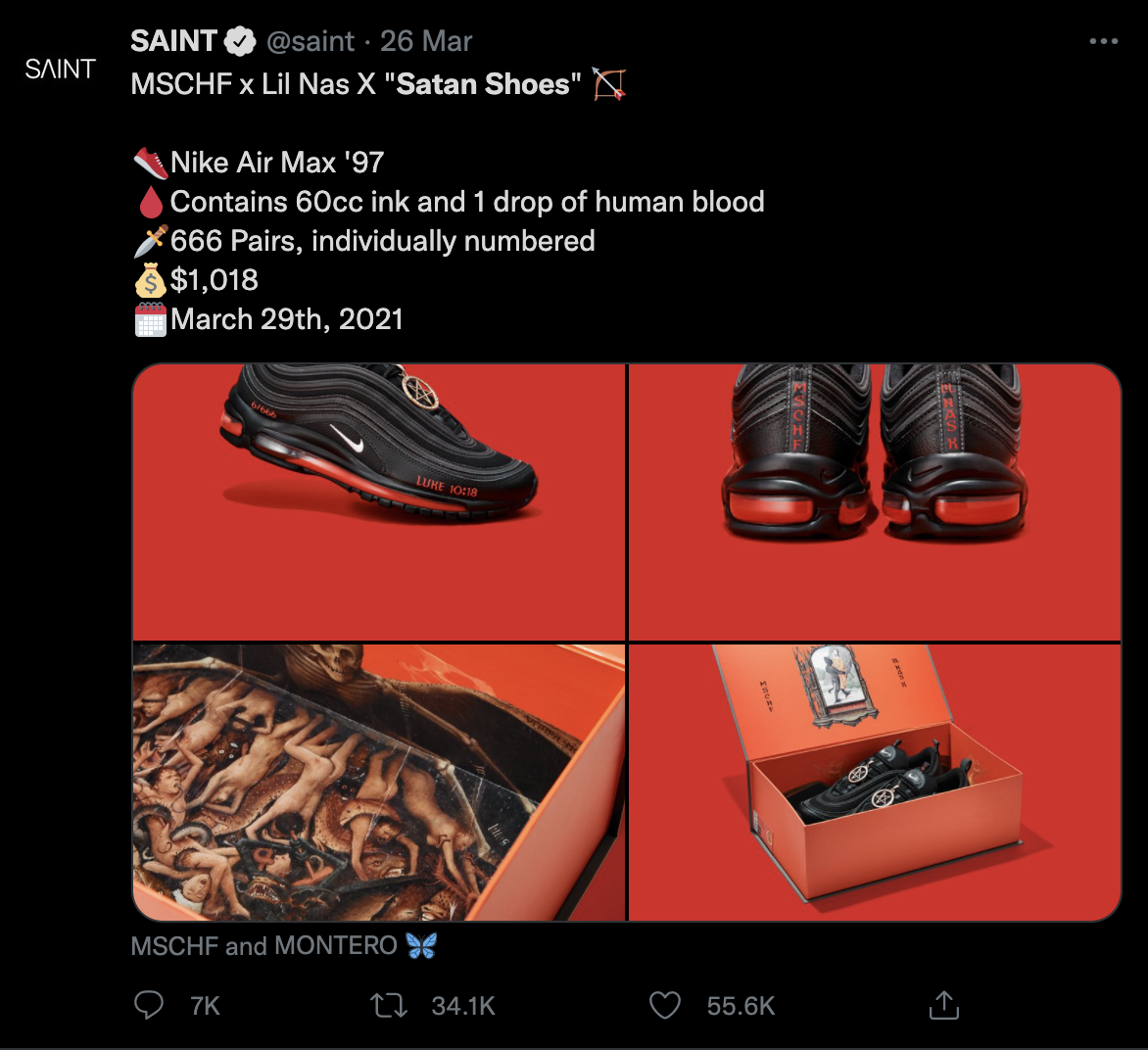 The release has been teased as a new drop on MSCHF’s website and with a dedicated domain: satan.shoes. Many mainstream media featured the announcement of the shoe which built not only hype around it, but more importantly a discussion around the shoe’s controversial theme.

MSCHF “Satan Shoes” viral was basically created by the media. MSCHF is known for playing their game well, and that’s just another case. They probably have some contacts in the press, which publish their products more eagerly. The topic suited them well, too.

Satan Shoes are MSCHF’s #43 drop. They have worked well for their name with all the previous drops and the viral character of each product has built their brand successfully. That means, some individuals and media are following when they announce their next drops as they know, they’ll always be cleverly executed and with a high potential of going viral.

The same goes for Lil Nas X. He made his name with the hit Old Town Road which has over 830M views on YouTube. He’s also known for his talent to drive attention to him. A collaboration of two strong brands has a high potential to drive eyeballs to the project.

The shoe was controversial right from the start. Even before the website was available to their audience, the leak contained an information about the drop of a real human blood, the limited run of only 666 and the price tag of $1,018 USD. That’s a one expensive shoe right there, but the blood part is what makes others talk about it.

As you’d expect, it was widely discussed not only by the streetwear community, but also by whoever felt offended about satanic shoes or from other religious-themed reasons. The controversy in those communities was of course spiced up by the fact that Lil Nas X is gay. Another thing in question was the audience of the artist who are kids in a large part. There are no moms who want to hear about their kids wearing a satanic shoe.

Before the shoe went into sale, Lil Nas X published an apology after getting a lot of online criticism. However, what starts like a usual online drama apology, quickly turns out to be cut into scenes from the MONTERO video. Apparently, this approach gets much appreciation in the comments.

Nike took it to the court with MSCHF for trademark infringement concerning MSCHF “Satan Shoes” with Lil Nas X. There was no clear statement from MSCHF about not being associated with Nike. This made many people think that Nike supports satanism and damaged their identity – you could read tweets calling for the brand’s boycott.

In a settlement, MSCHF had to offer full refunds to the customers in order to remove the shoes from circulation. I think they made their point, became a viral, and then, even refunding around $666,000 wouldn’t be such a problem – they’d have to invest much more to get so much buzz.

Of course, Lil Nas X is one attention grabber. Although Nike's lawsuit didn't hit Lil Nas X directly, once the court filing became known, he started posting memes with captions like “me and Satan on the way to NIKE headquarters.” To the concerned governor, he responded „ur a whole governor and u on here tweeting about some damn shoes. do ur job!”

He then posted the fake apology and even when the settlement had been made, he still wrote that he could go to jail for that. And right after, he started using #freelilnasx to gain even more attention. All that helped to maintain the buzz around him and the satan shoes.

As a part of the MSCHF “Satan Shoes” marketing strategy, two YouTubers got their Satan Shoes for a review – both known for reviewing sneakers and both had a good few hundred subscribers. They must’ve gotten the shoes earlier with a coordinated embargo to release the videos on the day of starting sales but a few hours earlier.

Brad Hall has a nerd-like style which has a potential to go viral and his review got almost 2M views. The second YouTuber, A Sneaker Life, made a video from unboxing which got over 3M views. However, all the craze around the shoe hit him, too, and many subscribers left the channel. After that, he recorded a video of throwing the Satan Shoes away, as he ‘doesn’t want to have that kind of energy around him’.

You can see that this action with the MSCHF “Satan Shoes” marketing has been planned really well for building demand. First, a leak was released, which created the initial buzz. Then, the controversy is caught by mainstream personas and media. While people are fighting over the Satan Shoe and just before the release, YouTubers are invited to show the product to the sneaker community. Then, the official profit comes, and the shoes go off in under a minute.

How were MSCHF “Satan Shoes” advertised?

A couple of things have worked here, so the MSCHF “Satan Shoes” marketing was a great success (despite the Nike's lawsuit): 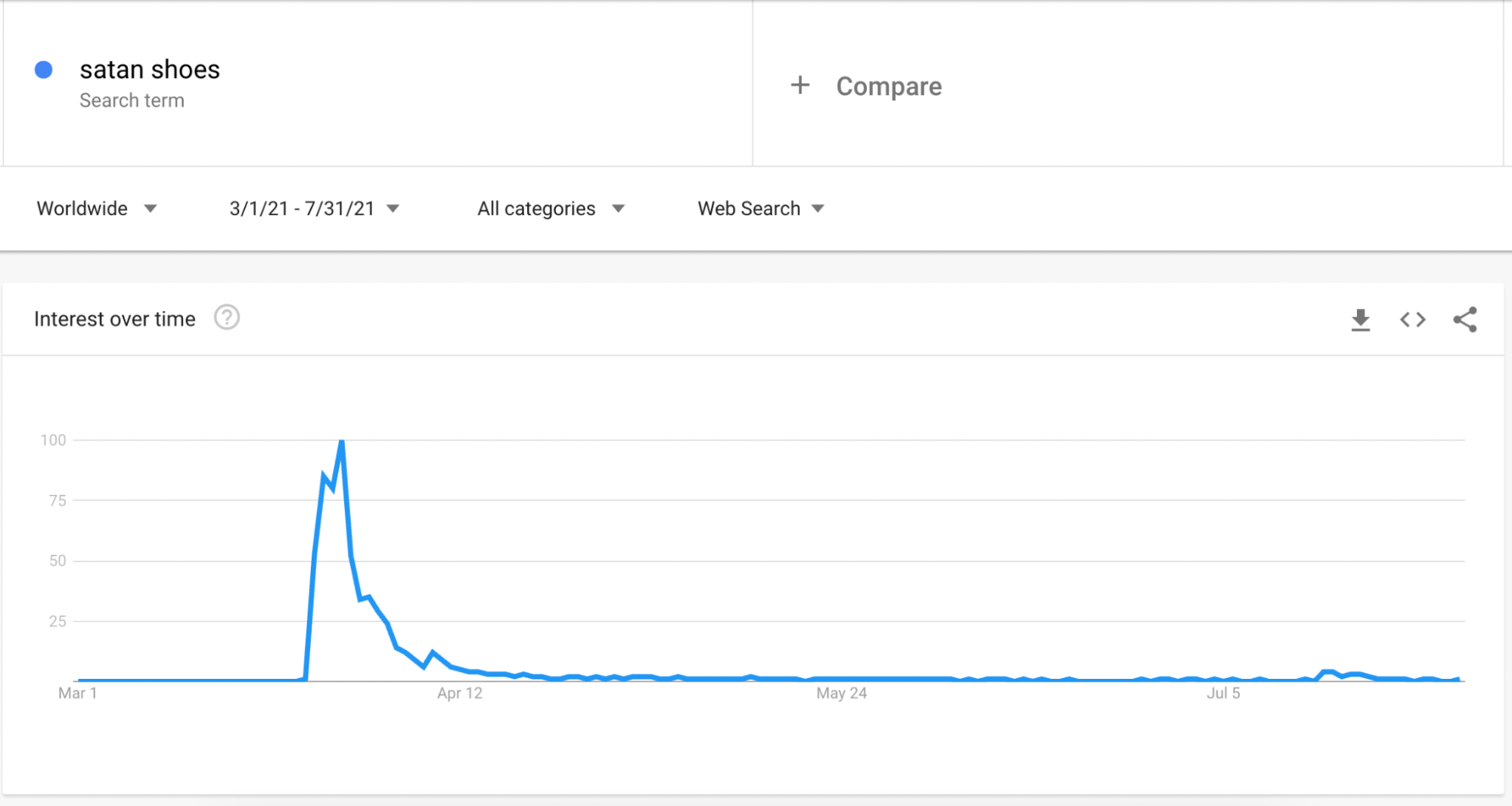 Things that stand out are better remembered. Once someone saw the Satan Shoe, a unique theme to do custom shoes, then they remembered them and if they felt like it, they could buy them once they were available.

The more we see something, the more we trust it, and this effect was easily observed in the MSCHF “Satan Shoes” marketing. Satan Shoes were so widely discussed that if someone was a sneakerhead, he was highly convinced to buy them.

All the streetwear drops play heavily on the Fear of Missing Out. With limited runs and short selling time-frames, buyers are afraid to lose the opportunity to stand out and feel the need to make the purchase.

People make their decisions based on their feelings. If they were offended by Satan Shoe, they quickly took it to Twitter, contributing to making it more popular.

Another important psychological aspect of ‘drops’ is the scarcity. Scarce items are perceived to be more valuable than what they truly are. With only 666 made, $1k for a pair of shoes might not seem unreasonable.

How MSCHF went viral with Lil Nas X “Satan Shoes” was a great job at picking up a controversial theme, planning the execution, and then executing the marketing strategy successfully. That all starts with well-known brands, but that could also work for you.

Building brand with viral content sets up the audience for future actions, while being slightly controversial helps you with making the content go viral. An important lesson is the distribution – even if you have something with a high potential, you have to help it by sending it over to publications relevant to your target audiences. It’s not for every brand, but it’s worth considering.