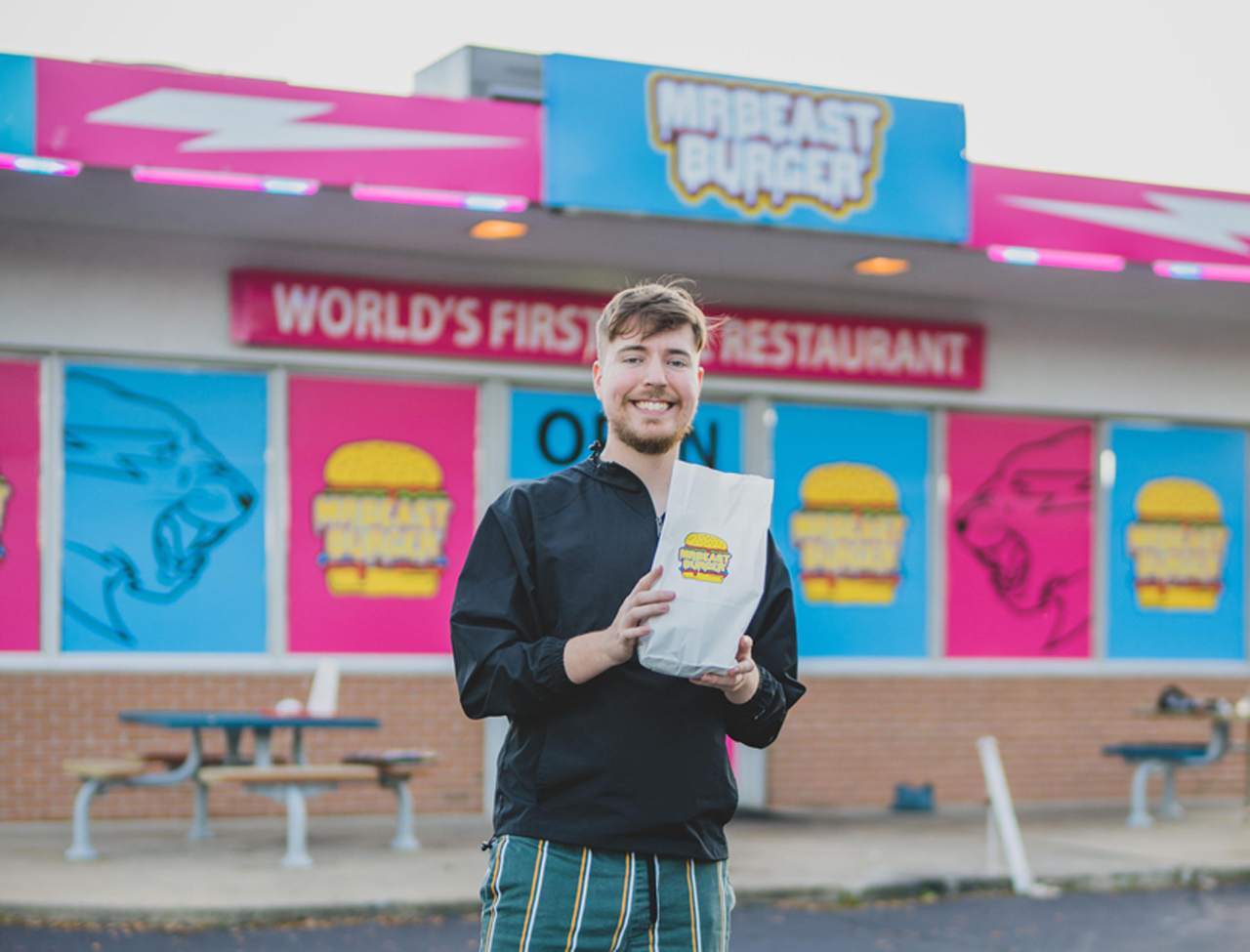 Mr Beast Burgers – a chain of over 300 virtual restaurants launched literally overnight in the US by a famous YouTuber.

How did MrBeast burger start?

It all started from a single pop-up event in December 2020 when Jimmy Donaldson (MrBeast) served thousands of his fans in Wilson, North Carolina.

The whole event was so successful (probably because of the YouTube'a popularity) that he decided to take up a challenge of turning it into a regular business… and it worked!

A famous, 23-year-old (as of 2022) YouTuber and a celebrity, Jimmy Donaldson is a founder of the MrBeast Burger. He's better known as MrBeast from his YouTube channel. To found the restaurant chain he joined forces with Virtual Dining Concepts.

Launching 300 restaurants overnight would be impossible, especially if such a chain as the super popular Shake Shack has barely reached 300. The key is in Virtual Dining Concept, a startup which uses existing kitchens to maximize restaurant profits by preparing delivery-only meals under known brands – such as Tyga’s or MrBeast’s.

In this business, everyone wins. The restaurant increases profit. The brand gets a physical business. The tech provider gets his cut. There are still some quality inconsistencies, but that’s definitely an innovative to run a chain of restaurants.

The math is also right. MrBeast gets around $1.2 margin from the order and since his manager claims over 20k customers showed up on the first day, that was already $24k made in just one day. Keeping this performance would go to $720k in a month!

Why is MrBeast so popular?

Thanks to his well-thought strategy. As he admitted in one of the interviews, he thinks about new ideas for months. This YouTuber knows exactly what makes a video go viral and uses that to grow his audience. The viral launch of his 300 virtual restaurants was a well-planned strategy execution.

Reaching out to your audience

It is commonly mentioned that acquiring a new customer costs 5x more than retaining an old one. That’s also the case for cross-promotion. With so big an audience around MrBeast, it would be dumb to invest in acquiring new customers. Businesses pay influencers to promote their brands, but an effective monetization strategy for the influencer is to build a brand. MrBeast took that to another level.

He simply leveraged what he already had and even if the conversion rate would be at 1%, he would get 500k customers out of his subscribers. That’s insane!

It's very profitable. If we take the average MrBeast Burger price which is around $8 (as of June 2021), and know how many burgers are being sold regularly, it gives us an estimated amount of $8 million in something like 3 months. It's more or less $30 million in a year!

The power of a giveaway

If there’s anyone who knows how to make a viral video, that’s MrBeast. He is known for giving away tons of money, and the launch stunt was based on the same concept. Customers of the MrBeast Burger restaurant got food for free but many of them received piles of cash, some got Apple’s products, one woman even received a car because hers was broken.

Marketing spend is exactly paying to encourage certain customer action. MrBeast treats that literally and gives free burgers and cash to customers instead of spending that on online advertising. For the customer, it’s hard not to share it with his friends and becomes connected to the brand. Out of one who received such a present, you get a couple of other clients and many others who watch the video and hope for getting some similar freebie.

It’s not only well-calculated but that’s also entertaining for those who showed up in the physical location and those who watched that on YouTube. Even today, MrBeast Burgers leverage giveaway and mention a chance to win prizes in the app. 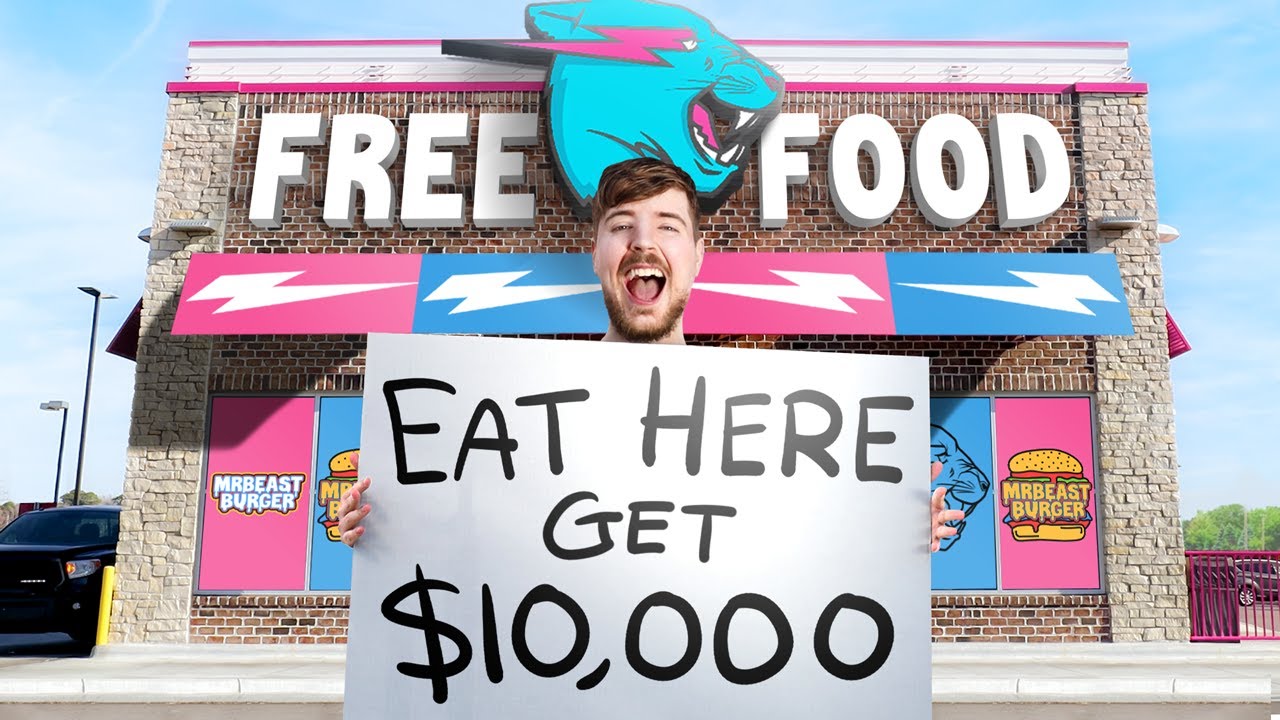 MrBeast’s content’s power is that it’s always entertaining. So was the video about MrBeast Burgers launch and all these stunts contribute to building a more and more powerful brand for the creator.

With that, he has a real influence on his audience and if he wanted to do so, he can monetize the brand in the future–just as with the burgers launched nation-wide. Except for that, MrBeast is known for reinvesting tons of money to do other crazy stunts that also contribute to establishing his position on YT but also in the global entertainment scene.

In fact, there is no original MrBeast Burger location. MrBeast burger locations are all delivery-only. It means that even if there is a restaurant building, you can’t order your food for takeaway.

MrBeast net worth – how much is MrBeast worth?

The famous YouTuber, MrBeast, has a total net worth of $25 million as of January 2022. 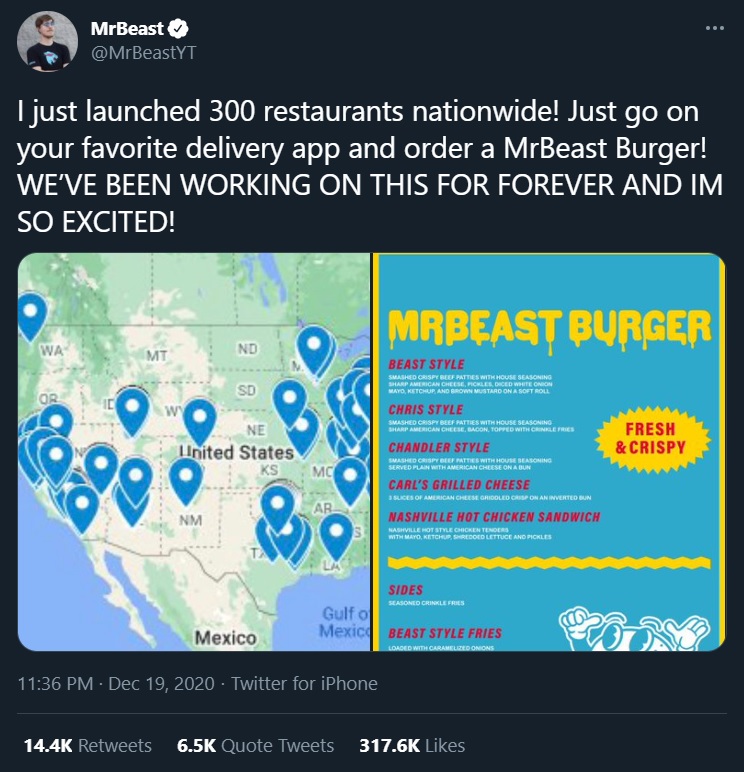 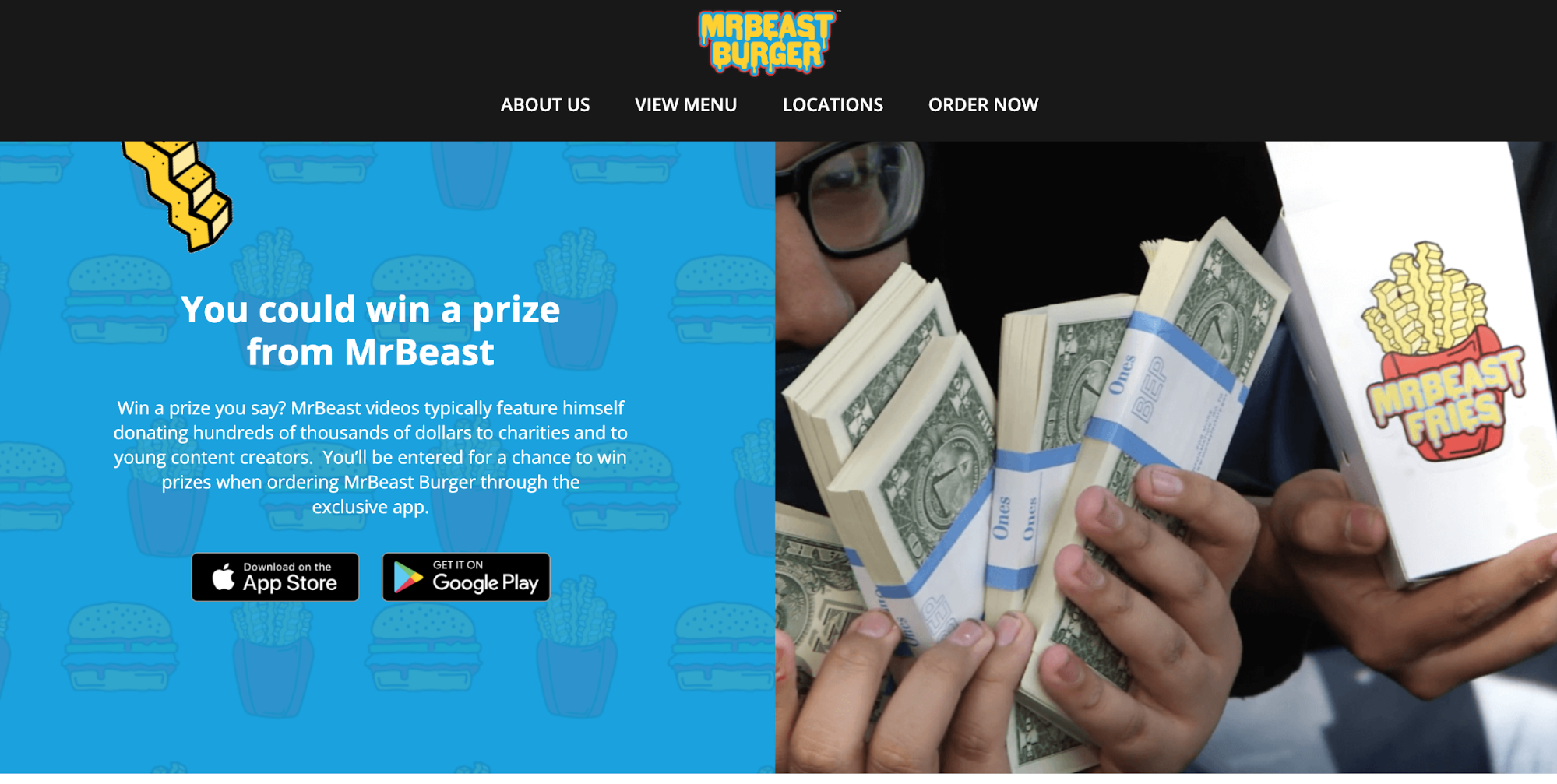 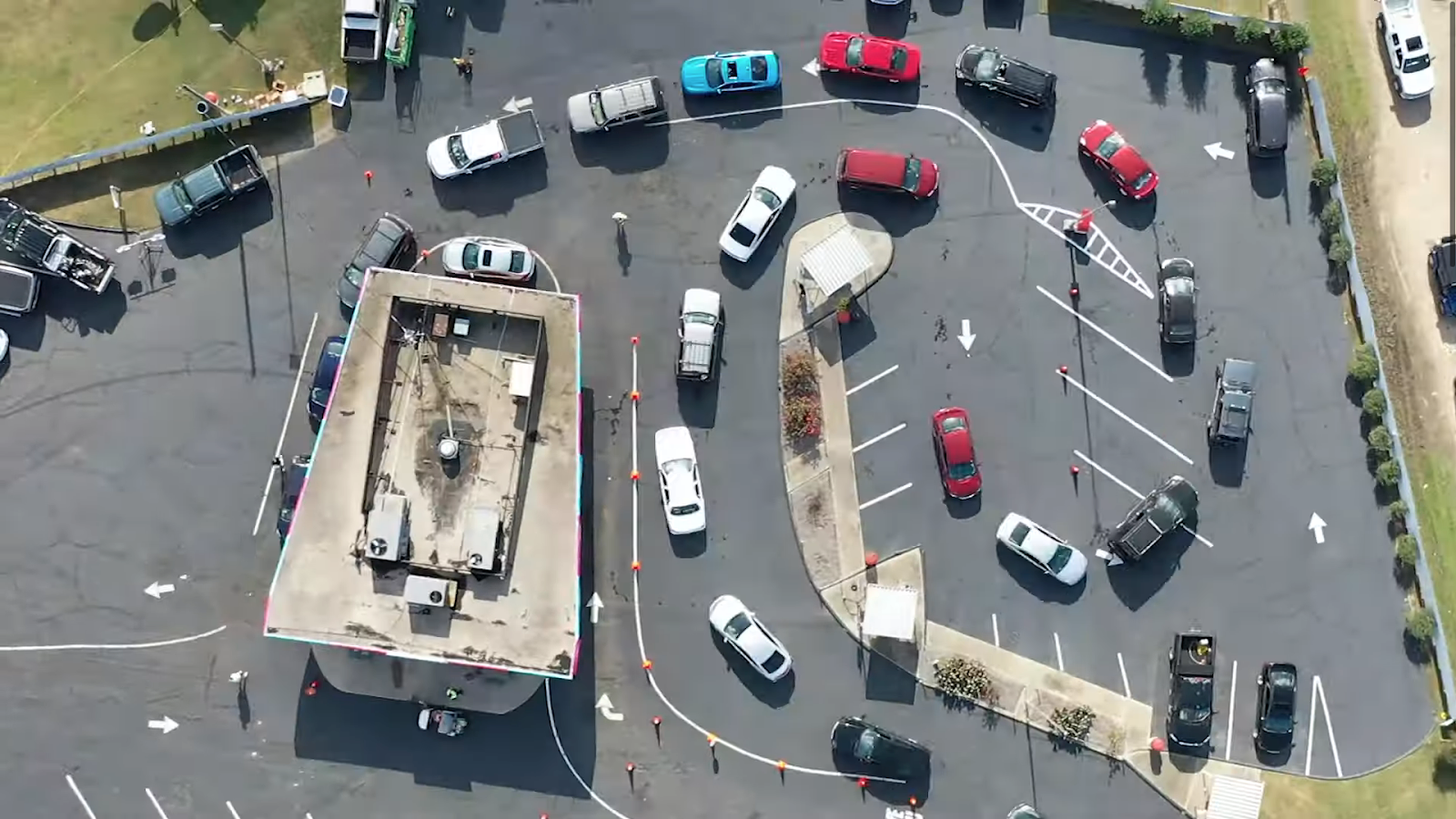 The initial piece of information in MrBeast Burgers’ promo video is a piece of content found later in the video. That relates to a cognitive bias that makes the future decision-making biased. The audience sees that the video will have an interesting moment and keeps watching–even if most parts of the video are less entertaining.

MrBeast Burger restaurant was a pop-up restaurant where he gave away burgers to people for free and even offered them money. He never published the address, but there was still a traffic jam lasting for a whole day.

That was because of the natural human curiosity which motivates to persist in finding the missing information. In other words–even if you had to wait for a whole day for the burger, you were curious on whether you’ll also be lucky enough to get cash with the order.

Once an event occurs and is noticed, every other similar event gets noticed, creating an illusion on its frequency. Even though only a few people could’ve got the cash and gadgets to the burgers, it seemed as so much people get these piles of cash. That builds a feeling of staying at the popup store.

The power of a story

Research shows that human brains are wired to maintain focus whenever they hear a story. Once we find it emotional, informative, or entertaining, we have a tendency to share it and social media is just one of the modern mechanisms to do it.

The video of MrBeast Burgers launch has these traits and this is what could both keep the watchers glued, making the video promoted by YouTube’s algorithm, but also to share the story with others. 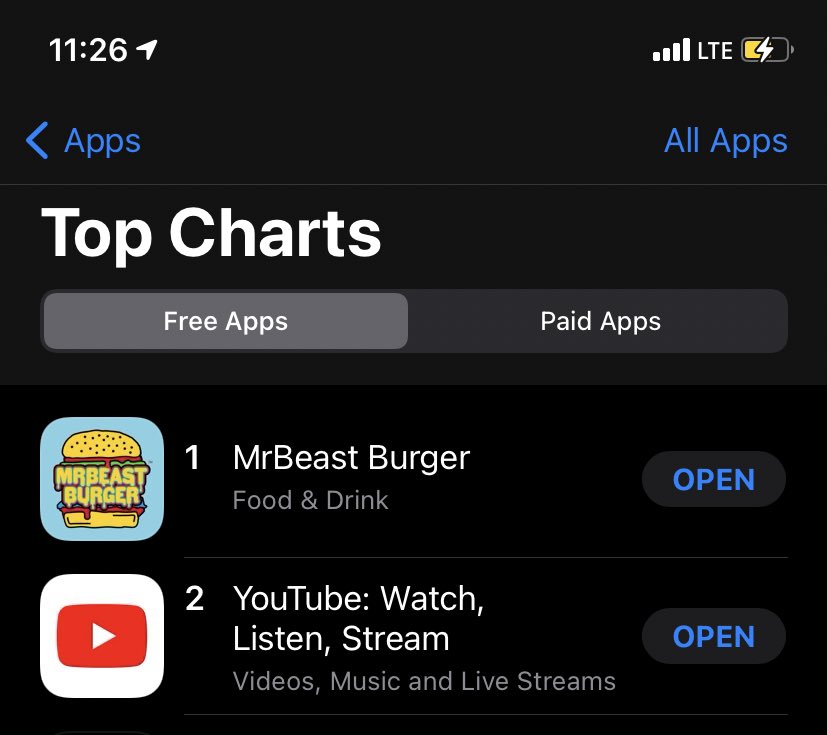 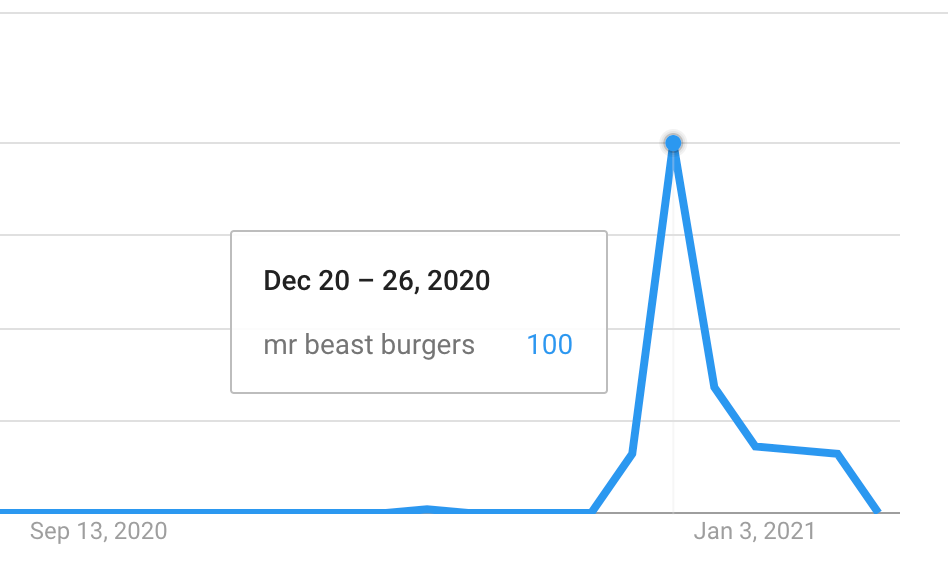 If you have a strong brand, leverage it and cross-promote to succeed with other ventures.

Viral videos and businesses aren’t happening by accident, and MrBeast Burgers are a great example of it. He has a clever business idea, he researched what makes a video go viral for months, and in the end–he successfully launched a business that people still talk about.

But if there’s a one-liner lesson in Mr. Beast Burgers, that’s the words of a marketing professor, Jonah Berger–„Virality isn’t born, it’s made.” Use it!