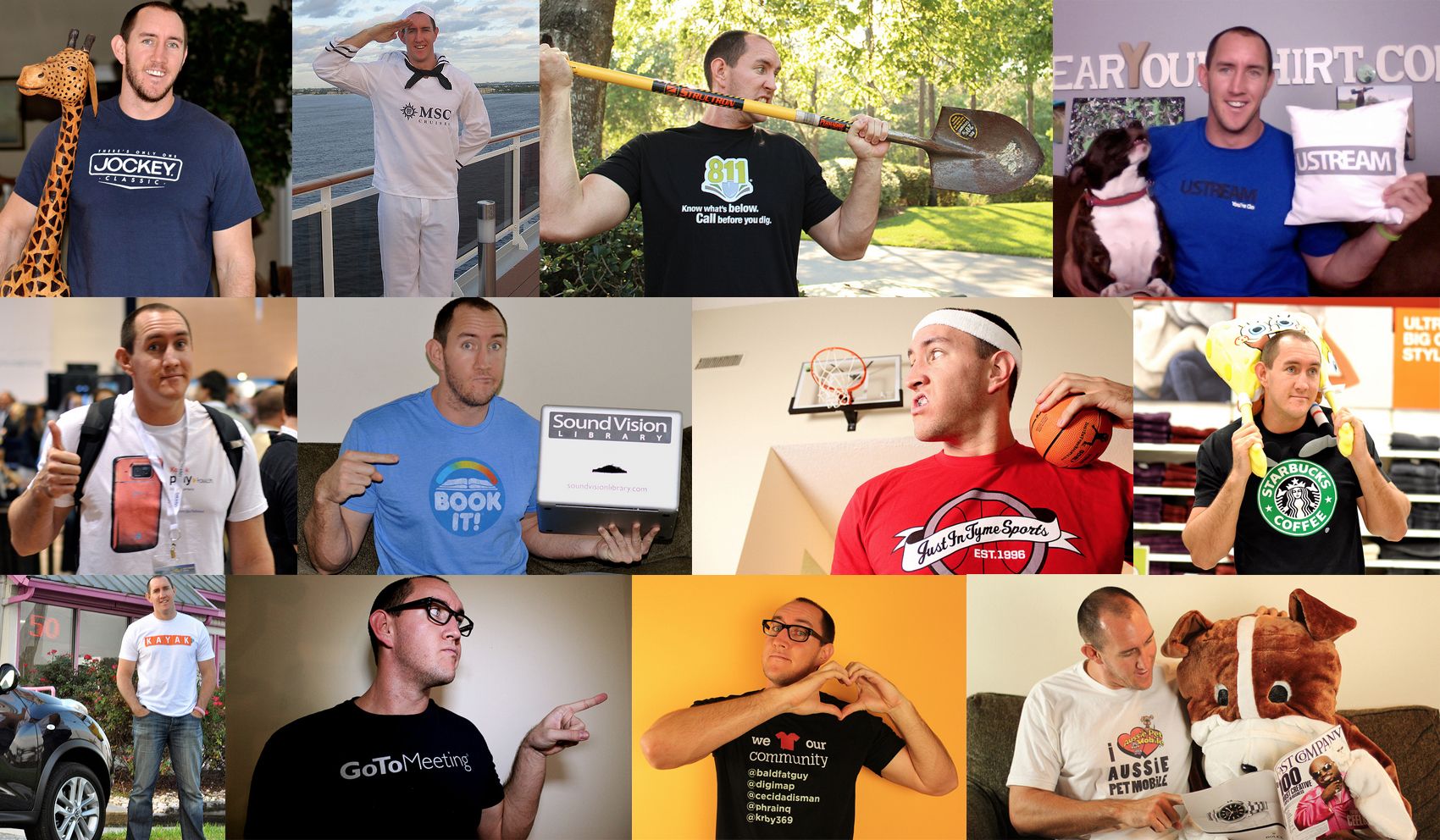 IWearYourShirt – how to make about $0.5M per year from wearing shirts (7 min read)

IWearYourShirt - Jason Sadler’s company where he wore shirts with logos of various companies and got paid for that. The founder changed shirts every day of the year to take pics and record videos for social media and advertise the companies that had paid him. 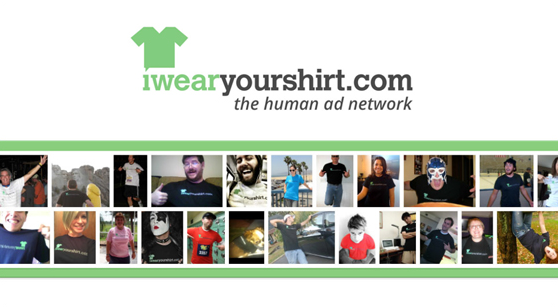 It all started from spotting a trend. Jason was looking for a business idea, and he spotted a trend. He saw that a lot of companies marked shirts with their logos. He thought it could be a great idea to use that fact to make money.

Jason was a graphic design major, but he used his studying years mostly for making social networking. He was learning new things, but also meeting new people.

In fact, Jason had had no previous experience with social media or marketing. He hadn't even made a simple YouTube video by that time. He just knew folks, so he made a team and they built him a website for IWearYourShirt.

January 1, 2009 was the first day available for renting/buying in the IWYS' calendar. It was $1. January 2 was for $2. Then, the price kept rising $1 per day throughout the whole year. He used Excel to learn that a $1-per-day scheme would pay him much more than a flat $100 fee. 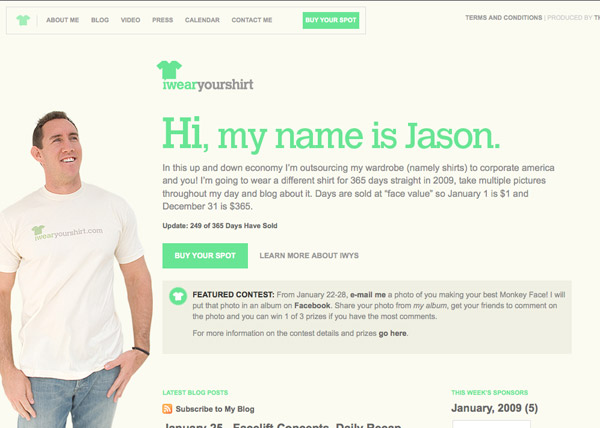 Reaching out to people

Jason needed to let people know about his website. He had about 200 email addresses on his list, and he emailed all of them, writing about IWearYourShirt.

An important thing is that he didn't try to convince people to buy days on his calendar – he only said that he'd like to let others know that something like that existed. His efforts gave him about a 600% traffic increase.

New York Times and Reuters helped IWYS get even more traction. It wasn't even about what those interviews and articles said – it was more about that prestige of being noted by such media.

For example, Jason spotted a boost in his web site's visit count once he emailed his contacts about the upcoming NY Times articles featuring IWYS. When the article showed up a few months later, the increase was barely visible. A few days later, Jason had 100 days sold on his 2009 calendar.

Both Reuters and NY Times got interested in Jason and IWYS thanks to Evan White. He met him through Chris Yeh, an investor and a mentor who was attracted by Jason’s unusual business idea. Eric became the head of Jason’s PR, and he did his job by letting the media know about IWYS.

One of the important milestones in the IWYS' story was the Ustream.tv livestream. More than 8,000 users gathered to watch Jason talking about IWYS to a camera.

Ustream.tv was one of Jason's first customers. One of their requirements was that Jason would run a stream on their platform with his Ustream.tv shirt on. Also, Ustream's audience was still much bigger than what was coming through IWYS' website at that time.

Ustream.tv gave Jason a huge boost. Many people tuned in to chat with him via the chat box. He replied and met new people this way. The live stream improved Jason’s contact with his audience on a daily basis. Many of those viewers stayed with IWYS much longer after the stream. 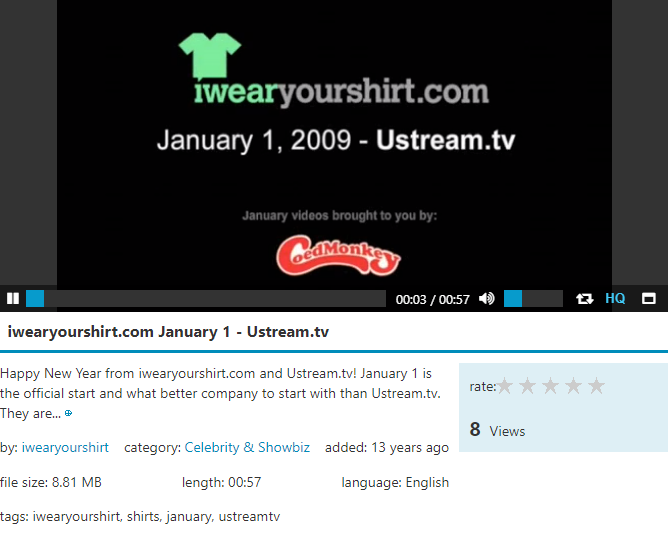 Jason did influencer marketing before it was a things! He woke up every day just to wear a branded shirt, go out, and take some pics/vids while doing stuff.

He created his own community through his Twitter and live streams on Ustream.tv. This is exactly how today's influencers work. Jason could record and upload a short video while he was going by car for his breakfast.

He even visited exotic places sponsored by companies visible on Jason’s shirts. One such example was Mediterranean Shipping Company Cruises. They sponsored him on a 5-day Caribbean trip with their t-shirt on. Nowadays, it’s called a “deal,” and it’s a common thing in influencer marketing.

People don't like it when they miss some important information or event. Jason sold each day in his calendar to only one company at a time. That meant that 1 day was advertising 1 company/brand. That created the FOMO effect because once a day got sold out, it couldn't be sold once again to another customer.

Also, Jason was active in social media on a daily basis. His numerous followers kept watching his videos and pictures regularly. They didn't want to miss anything of what he was sharing with them.

People value more things that are rare or limited in some way. FOMO is linked with the scarcity effect here. A year has 365 days. That meant that there were only 365 occasions/dates to take a spot for the advertisement. Jason changed shirts everyday, so he wore exactly 365 shirts throughout the whole year. No more, no less.

People could observe Jason as he recorded more and more materials. We tend to put more value to something if we can see the author's effort to do it right.

Jason documented various activities while wearing branded shirts. That showed that he really lived in those shirts, and not only wore them for nice pics and videos.

Jason was authentic in his words and actions. That's why he possessed so many companies that trusted him. He also had a large follower count, which might stand for another piece of evidence that he seemed to be authentic to people.

Jason's business idea was weird and did stand out. Making money just by wearing branded shirts sounded like a joke. The fact that it was so unusual might have brought some of Jason's customers to his website. This is because people remember things better, when they tend to stand out in a specific way.

Besides the website, Jason had two other activities later on. First was changing his last name for one year by setting up a BuyMyLastName.com, and putting his name on the auction for various companies. The biggest bidder was Headsets.com ($45,500), so he quickly became Jason Headsetsdotcom. Now, he is Jason Zook. He took that name from his grandfather.

Another extra is Jason's book about his IWearShirt adventure. The book contains the case study of IWYS, such as the revenue, marketing strategies, and so on. He set up SponsorMyBook.com and finally got a total of $75,000 from sponsorships. At the time of writing this, his book is between $12 and $25 for a single copy.

Jason Sadler began by spotting a trend. He noticed that many companies have their branded shirts, and he thought that it could be a way to make big cash.

He just then rode the trend nobody had ever thought of. It was unique, and that's why it had succeeded.