Groupon – a website with group discount deals. The fastest-growing startup ever that went public through the biggest IPO since Google, at $750 million valuation.

Narrowing down the focus

Groupon started as The Point, a platform to utilize negotiating power of a group to be used in multiple cases–signing petitions, collecting money for charities or getting store discounts. That wasn’t a success since people had a hard time understanding what’s the platform all about.

After narrowing down to group discounts, the value was easier to communicate and then–Groupon shot for the stars. 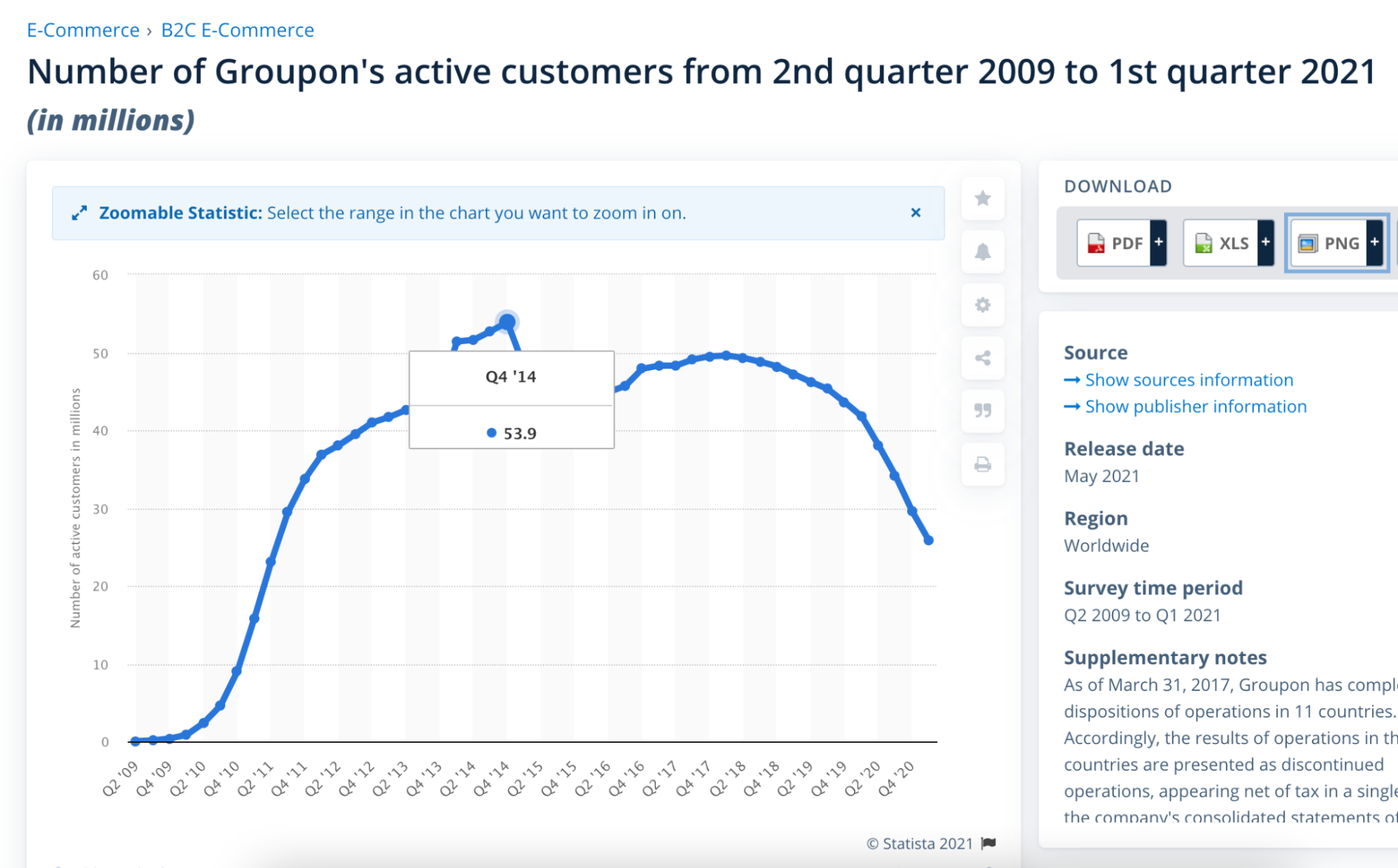 Why has Groupon been so successful so quickly?

Groupon didn’t rush expanding to new markets and began locally in Chicago. Then it became available in 28 US cities and only after that it was introduced in other markets around the globe. That focus on local was what made Groupon so successful. It ensured there was enough options to choose from.

One deal at a time

There was only one offer per day in their beginnings. That made Groupon's visitors focus on it and come back every day to check the progress of the deals they bought.

The problem of such deals with a tipping point is what if it doesn’t meet the criteria–do clients lose money or the sellers have to offer higher discount to fewer people? Groupon is the intermediary that guarantees that if the criteria is not met, the deal won’t happen. That makes both sides more keen on placing offers.

Following from The Point, Groupon used threshold points from which each individual deal would become effective. If someone wanted to make it happen badly, he’d share the deal with his friends, so they all can use the discount.

Groupon purposefully featured offers that were likely to go viral and be shared multiple times. That means all the things you’d do with your friends – going to movies, restaurants, gokarts, etc. The offers were shared because users wanted to ask friends if they’d come with them.

The businesses to provide offers were sourced manually. The initial team of 5 people went to companies and asked to provide a group offer. Those were 20-something males, and they looked for something they’d use.

Then, when they were low on deals, one of the guys sold a manicure deal. They put it on the site only as a placeholder. Only to find that it’s an instant bestseller. SPA deals are still the most lucrative deals for Groupon.

Groupon were pitching the idea to the Chicago Bulls. Sales were in, but marketing were not and the deal has been eventually turned down. However, it turned out the Bulls have a group sales department where if you brought 25 or more people to the game, you got a 50% discount on tickets.

Tickets for Chicago Bulls game were featured on Groupon anyway, and they sold over 26 of them, which they had to distribute manually in the group of buyers. Chicago Bulls marketing weren’t happy with that, especially for an unauthorized use of their logo. The logo had been shortly gone from Groupon, but they leveraged the Bulls deal to land other brands in Chicago, like Whole Foods.

The growth hypothesis was through local focus and a small mailing list. For the first offers, the list was around 500 members, constructed mostly of friends and people working at the same building.

Later, the company still focused on building the list and sent daily offers via email, so the users kept coming back.

Getting the deals is one, but how Groupon makes money off these bargains? You might say it’s quite greedy–it takes about 50% of the deal and an additional credit card handling fee. That means they get 25% of the original price and the vendor gets the other 25%. It still works because Groupon works as a marketing platform to those businesses and on the right scale, that can still be profitable. That’s why businesses can set up the thresholds from which the deals become lucrative and agree to serve customers only beyond that point.

The offers on Groupon followed a strategy that avoids price or assortment competition from such giants as Amazon or Walmart by finding niches and angles where they are not present. This led to the decision of focusing on local activities and unique local products. This created a competitive advantage for their users.

Groupon has been built on copywriting. The deal descriptions have always been funny and on-point, becoming another reason why you would share them. Writers who worked at Groupon have followed a training for the tone of voice and copywriting at the company and admitted that they worked with similar organization to journalists.

Groupon has been another business to use referral bonuses–if you referred Groupon to others, you’d get $10 in Groupon Bucks for each of them when they buy a deal. The lifetime value of each user could be of $25 to $35, so the operation was still profitable.

One deal per day quickly reached its limitations as there were more customers than they could handle. On the other side, the number of interested businesses was so high, that they had to wait for over 9 months to get featured. That inefficiency sparked the raise of many Groupon’s clones.

To fight them, Groupon has developed a targeting mechanism, enabling them to tailor the experience to different users, based on their preferences. That quickly diminished the reason for the clones to exist.

Whatever Groupon did, worked short-term too, but as Andrew Mason states, all their actions were oriented for long term growth, even if in the short term they appeared counterintuitive. 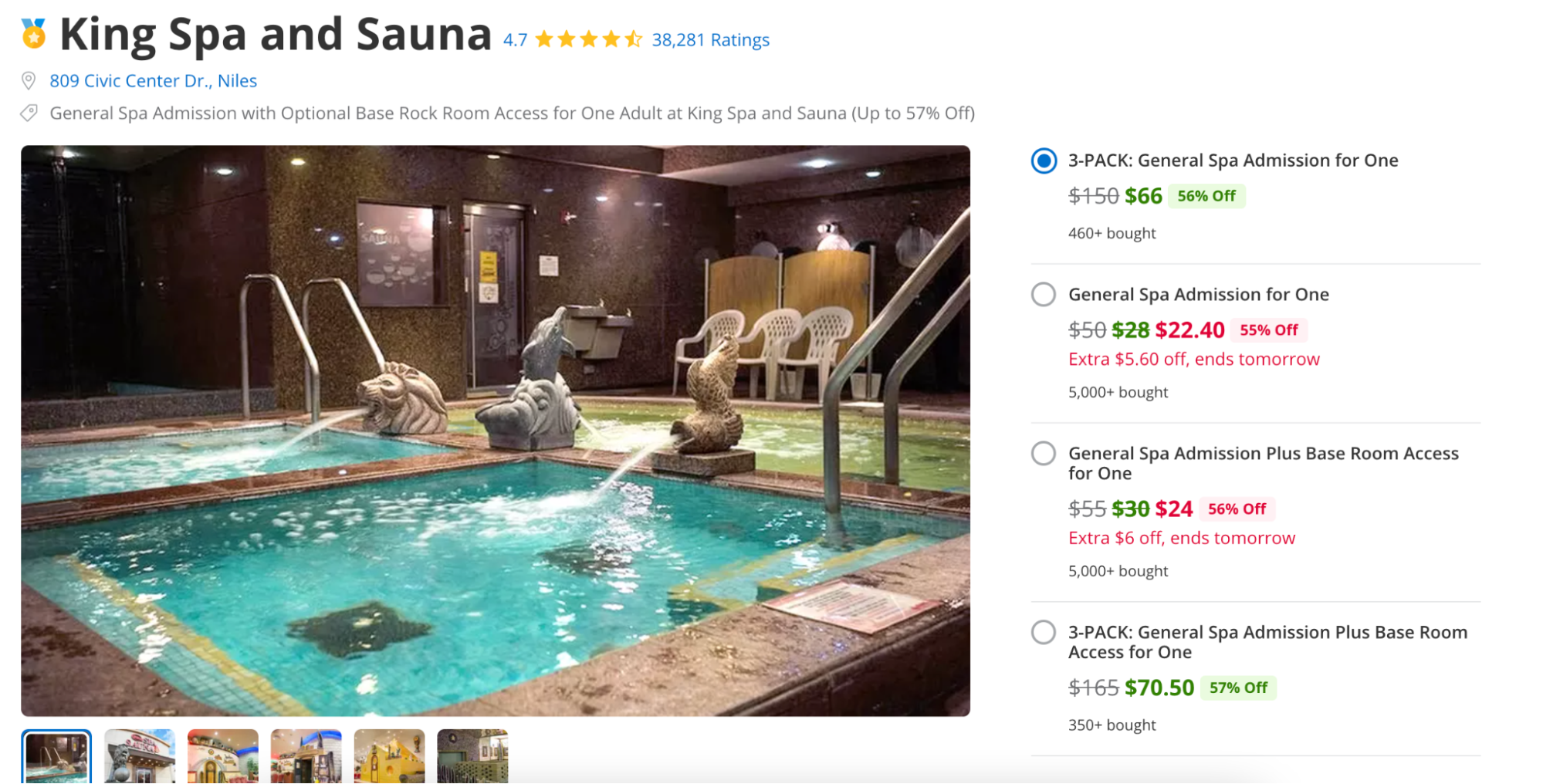 Reaching the goal is a reward–you can buy something for half as much. Rewards are simply what motivates people to take action, like share an article.

As usual with referral-oriented growth, the social proof is what makes it work. If an information is shared by someone you know, you’re more likely to become interested.

The closer the reward, the faster people want to achieve it. This works for the deals that need to reach a certain number before they come into life. The closer it is reaching the threshold, the more effort will they put into passing it.

The copywriting at Groupon has always been quite funny. Humor also makes things easier to remember and connects the brand with positive feelings.

People are literally hunting for the thrill of a bargain. They want the feeling of being a successful shopper. That’s basically what Groupon allows them to fulfill.

Groupon is one of the best examples of startup growth. It has been designed in so many ways to be shared and go viral repeatedly. How can you use that? Focus on the product or websites that have built-in features that will make people share it, like GoHighLevel - pricing. This is purely engineering the platform for growth, which only can boost the other marketing activities you’ll be doing.

You could also use other growth marketing tools to boost your business.