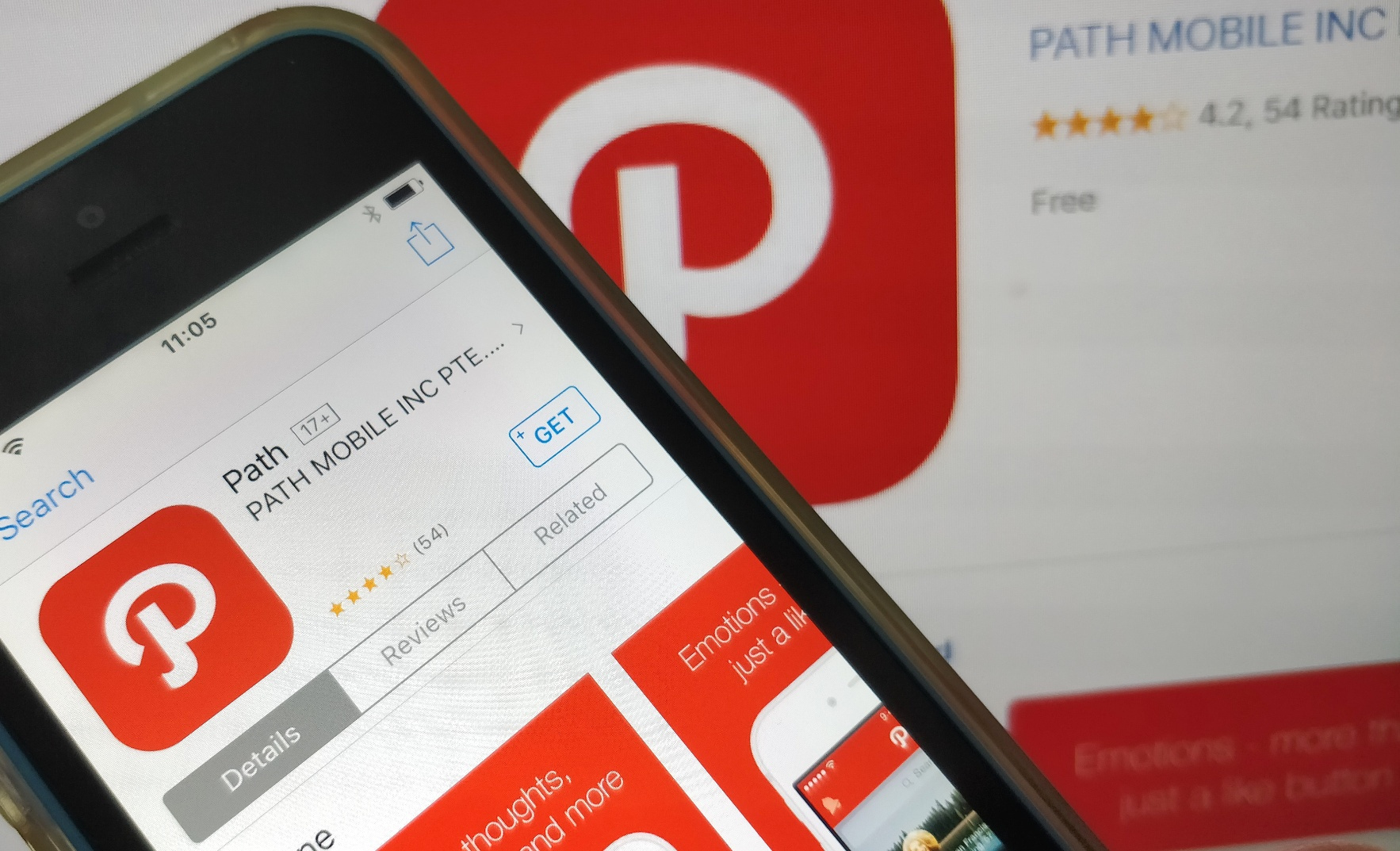 Path was a social network app. Its primary aim was to pose a competition for such giants as Facebook and Instagram. At first, it only let their users share photos, but it was later on when it really hit the jackpot and became a more sophisticated version of Facebook and Instagram combined.

How did Path app start?

The social network app Path was founded in 2010 by Dave Morin and Shawn Fanning, former Facebook employees. It didn't offer much at the beginning, though.

Although the app gained a true “new life” after its relaunch, it was difficult for it to stand a chance against such giants as Facebook or Instagram, especially because it offered similar services to its users..

Path’s difference was hidden in its friends' system. The developers’ aim was to create an app for strengthening those bonds which are authentic and true in our life. That's what the social network Path marketing was based on.

It is said that the average person’s social group usually closes up in the number of around 50 people. Those include the family, some distant relatives, colleagues and the closest friends with whom we share some of our experiences, hobbies and events in our lives.

Facebook, Instagram and many other social apps don’t have such limits, which makes all those acquaintances less real. Path 1.0’s maximum friends number was limited to 50. Path 2.0 increased it to no more than 150.

By limiting the number of possible social connections, Path made its users feel more “private” and “comfy”. Although not everybody may be eager to send friend requests to random people whenever they got such a chance (for example on Facebook), the very idea of being a part of such a large pool of possible social connections may trigger anxiety and shyness in some users.

In order to make a social networking app work, it has to achieve the network effect in which it spreads among circles of friends and family. This, on a micro level, contributes to millions of downloads on the macro level.

It worked because Path premiered while the App Store was still known for the quality of its apps. It was also required to invite only the contacts you have on your mobile and since the app was positioned for connecting those inner circles, it was more likely to be shared.

Although Path has been working on releasing the app on Android and Blackberyy, it stayed iPhone exclusive. This intrigued iPhone users and made those who were new to the platform download it immediately but at the same time–close groups of friends are not “iPhone only” and this was a limiting factor.

Path has been released over a decade ago when the market was much less saturated. This simply gave more eyeballs to the app but at the same time–its design was beautiful for then standards and mobile users were looking for apps that had cool experiences.

Without a full-blown marketing campaign, Path must have grown by word of mouth. If one person found it, it had to invite others in order to try if it works of their groups.

An important factor in Path’s popularity undeniably was the character of Dave Morin. He was a former Facebook employee. Another star in Path’s story was Shawn Fanning, a co-founder of Napster – a cross-platform file-sharing service for music. Such an impressive crew made for a solid foundation for developing a new social media app.

Turning down a lucrative offer

Nobody knows what everything would have looked like if Dave Morin hadn’t turned down Google’s offer for Path. Nevertheless, this event was an important milestone in the app’s history. It also brought more eyes to the app.

An important milestone in the social network Path marketing history was the app's relaunch in 2011. The relaunched version of Path attracted new subscribers with its simplified UI and, more importantly, a bunch of new options. Path 1.0 was a simple photosharing app. Path 2.0 was much more like a combo of Facebook and Instagram.

How Path was different from Facebook and other social media apps on the market those days? It had most of the similar functionalities, such as sharing status updates, shooting and uploading new photos, chatting with people or tagging them in your photos.

However, what Facebook and Instagram doesn't have are the “Place” and the “Music” options, and social network Path marketing strategy focused heavily on those differences. The first one let you share where you were and the second – what you were listening to. Of course, everything could be tagged so that your friends would know what you do and where you are. The “Place” also provided users with something similar to Google Maps' feature. Once you tagged a place where you currently were, the app would show you a list of similar places near you, so that you could visit more if you wished.

Why is Path discontinued – The community

One of the biggest downside of the app could be its considerably small community, most of which were based in India. Perhaps a different style of marketing and branding could turn the table for the Path’s developers and widen their audience.

One cannot forget about the users’ privacy issues. The problem with the privacy policy of the social network Path cost the company a lot of money and, on top of that, a hurtful loss of their popularity among the users. Who would like to give out their personal data to some unreliable app while there are much safer alternatives on the market?

What happened to Path?

Turning down a lucrative offer, legal problems with users’ personal data storing and quite limited community made Path too “original” in a bad way – it's gone. It scored a miraculous rebirth and just as hard landing when it ceased to function on 18th October 2018 – this is what happened to the social media app Path. However, Path’s story may be a good lesson and a warning for anyone aiming at going big with their ideas for business. 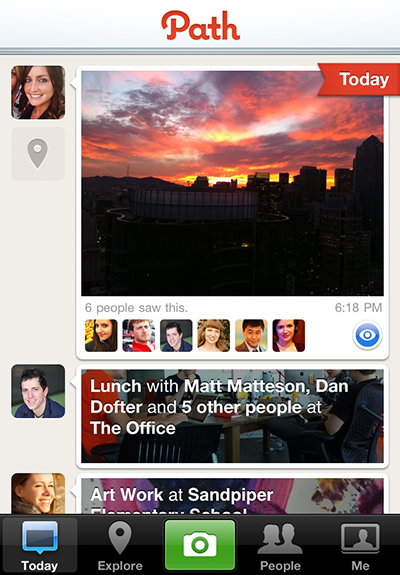 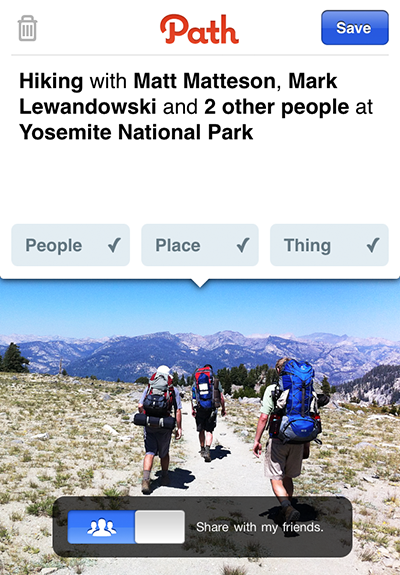 Path has been based on scientific research. One was that by an Oxford Professor, Robin Dunbar. He found that the brain size limits the number of close connections that humans can have. 5 people is whom they consider the closest friends, 20 whom they maintain regular contact with and 50 is the outed boundary of personal networks. Dunbar’s later research stated that both in real life and online, humans cannot manage an inner circle of more than 150 people.

The app’s focus on bringing families and close friends together let them have a more authentic experience when using social networks. They could share anything they wanted, knowing they won’t receive invites from people they’ve seen years ago or someone they’ve once met at a party.

People generally tend to seek out novelties. We are stormed with various stimuli every day. That’s why most of us easily get bored with repetitive and similar things. Path 2.0 were a big hit right after the launch and some time later on as it was fresh and new in comparison to its older version as well as to the other popular social media apps.

The beginning of the Path’s story may leave a trace of the Dunning-Kruger effect. Dave Morin had big hopes for his social network Path app, but it doesn’t seem that he estimated his chances appropriately. The app could have been more successful, and maybe it could have even avoid total termination if the developers hadn’t limited its functionalities only to sharing photos.

Morin’s struggle to keep Path running in spite of everything else is a good example of the sunk cost effect. Once you invest your funds in something you believe in, you are more willing to continue with investing more and more money, and you tend to hope everything will be fine…

Negative social proof has caused Path’s loss of popularity. Once the privacy problems emerged, the app’s users became less trusting towards it. Path’s fine was an additional piece of evidence that something was definitely not right.

Path’s beginnings were not too bright because it was just too simple. It offered not much content, and it was quite poor in terms of its functionalities. Simple things are good, but it’s very important not to spoil the good impression with oversimplification.

Path’s similarity to Facebook and Instagram could have been its main problem, while also being its biggest advantage. Most of the Internet users know what Facebook and Instagram are. Path were just “another social media app”, and it was enough for many of its new users to give it a try. However, it was also too little for Path to become successful.

Dave Morin was surely motivated to press on with Path 2.0 after its launch. The results were truly astounding, although it didn’t last for too long, too.

Novelty may be a key factor if your business is not doing too well. Try coming up with some new features of your product. It could generate more attention and bring more potential customers.

A solid backup can be the game changer, too. Path’s team were experts in their fields. They knew what they were doing to the point that they even refused Google’s offer. Their example shows how important connections and social networking are in this world.