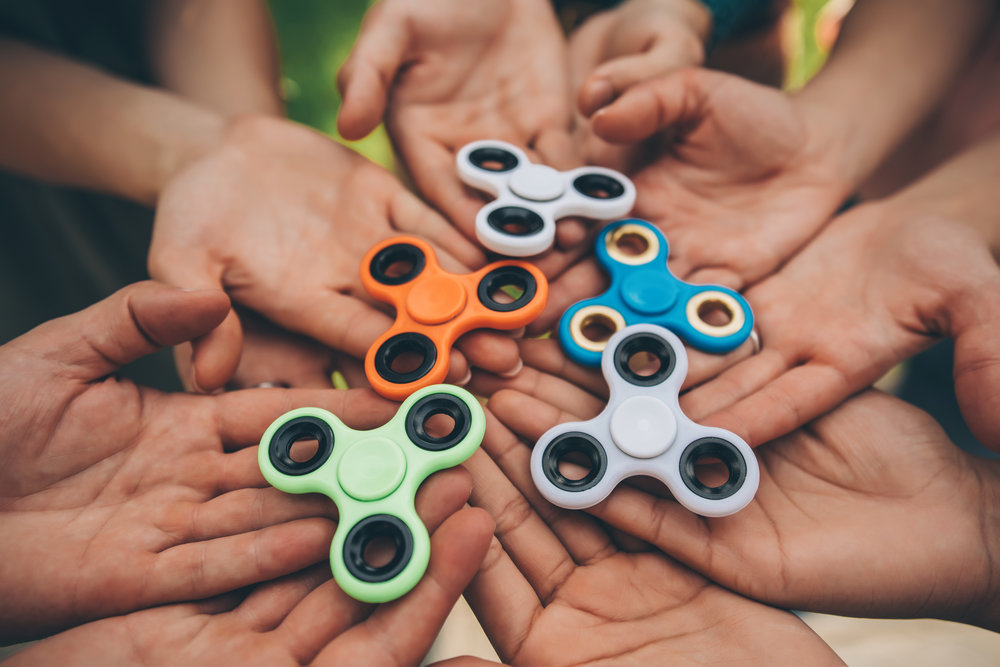 How did Fidget Spinners get popular (9 min read)

Fidget spinners – toys that helped kids with autism or attention disorders to focus. Out of nowhere, it flooded classrooms across the US and other parts of the world. While not being sold by any single company – it was rather available on gas stations and in 7-eleven stores. Just as fast as fidget spinners came, they were already gone.

When was fidget spinner invented?

First fidget spinners were made in 1993 in order to help children with attention disorders. It was marketed and advertised as a toy for the youngest, but it was not until 2016 that fidget spinner got popularised.

Actually, fidget spinner was invented by Catherine Hettinger, but it was a high school students duo, Allan Maman and Cooper Weiss, that pumped it up.

They wanted to buy a fidget cube on Kickstarter to help Maman keep the attention with his ADHD but didn’t want to wait months for the product to arrive. They have seen how to make something called ‘fidget spinner’ on Etsy, though and wanted to recreate it. For that, they needed a 3D printer – they used one belonging to their school.

How was the fidget spinner marketed?

These first fidget spinners were sold only at the founders’ school for $25.99 and it went like crazy. The school didn’t like the idea of using their 3D printers for commercial use, so Maman and Weiss had to move to Weiss’s parents’ basement. Especially that they’d set up a Shopify online store and scaled the business even more–eventually, they had to use a factory in Brooklyn to keep up with the demand.

Launching the online store made Fidget360 ship to 50 states and 30 countries, earned $350,000 in just 6 weeks, and is possibly the reason how the spinners went viral.

How was fidget spinner advertised?

The guys from Fidget360 used Instagram as their main platform to communicate their products and buy ads. It quickly rose to over 150,000 followers, although now it’s closer to 100,000.

The message about fidget spinners was mainly passed by word of mouth. This is another strategy how fidget spinner was marketed. After the first high school got injected with the toy, friends from nearby schools wanted them, too. With the internet, a local hype can quickly become a global one.

Many Youtubers wanted to ride the trend they’d spotted and recorded video reviews, tricks, and other types of fidget spinner-related content. Many of those videos were seen well over 80 million times and the one by Dude Perfect more than doubled that number.

When spinners soon went off the shelves locally, they started to become a collectible and even a form of currency. Kids traded some of them to acquire more colors and styles.

Hopping on the trend early on

Learning Express Inc, a chain of 120 toy stores closed April sales at $2.6 million. That was up 866% from $300,000 the month before. Another business that won on fidget spinners was Top Trendz in New York which got 200 orders per hour at the trend’s peak.

Making it to the News

The hype was further fuelled by all the mainstream media such as Wall Street Journal, covering the topic. They might’ve been late to the party but widely describing fidget spinners gave them some fuel to stay on top for just a little longer.

Although the original fidget spinners got forgotten almost as quickly as they became the top trend, they have helped to create a new genre of toys. All of them have ‘fidget’ in the name and occupy hands with different ideas. Some of them make to the top lists on Amazon for just a few days but that’s enough to make serious sales, considering the usually low production cost.

Were fidget spinners a FAD?

FAD means a product with low (if any) utility and with short lifespan. FADs get on the trend pretty fast, but they fade away just as fast. An example of a contemporary FAD is Pokémon Go.

As for the fidget spinners, they weren’t produced only by Fidget360 – Chinese manufacturers had quickly jumped on the trend too. Without any central company behind spinners, there was a fast organic growth that kept up with the overall demand, but there was no one to keep the momentum and transform it into something that would last. Single retailers didn’t have that vision which is why although they made real cash during the boom, many of them ended up with a stock of fidget spinners that were no longer in demand.

According to this research, if we are doing something that is not interesting enough to maintain our focus, adding a mildly stimulating sensory-motor input allows our brains to engage fully and maintain focus on the primary activity we participate in.

When it comes to adopting new trends, teenagers have been always one step ahead of adults. This is how fidget spinners could rise to such a viral status in a matter of weeks.

Since fidget spinners were the most popular in kids and teenagers audiences, meaning people with a strong need for belonging, getting a fidget spinner was something to have in common with others.

The more kids got their fidget spinners, the more the toys were seen and eventually, the more had been ordered. The snowball kept on rolling, bringing new people to the toy.

All the demand for fidget spinners has been generated organically, by peers. That authentic feeling made the decision more ‘theirs’ to the new buyers.

A social referral is always more powerful than a dull message. Having your friends refer you a product makes you more likely to buy it. 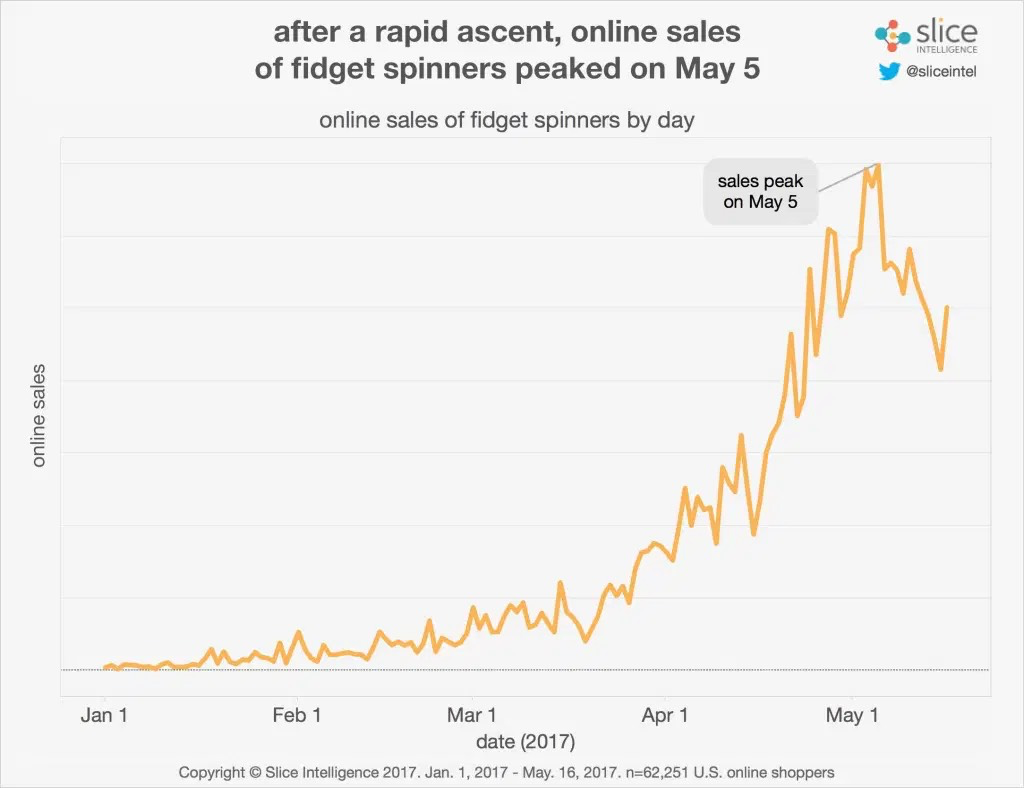 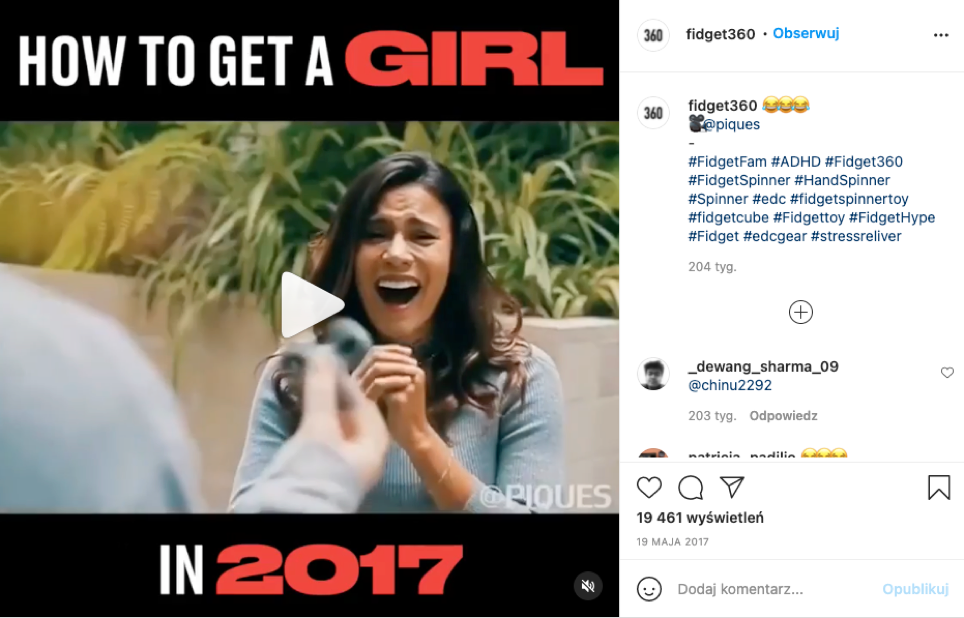 You should always stay on the lookout for the trends and try riding them as you’ll never know if they’re going to last a few days or years.

In this case, the most valuable lesson might be not necessarily in how fidget spinners got big but how they soon were gone. If you manage to create a viral, know your next steps and channel that attention to your business for long-term effects!