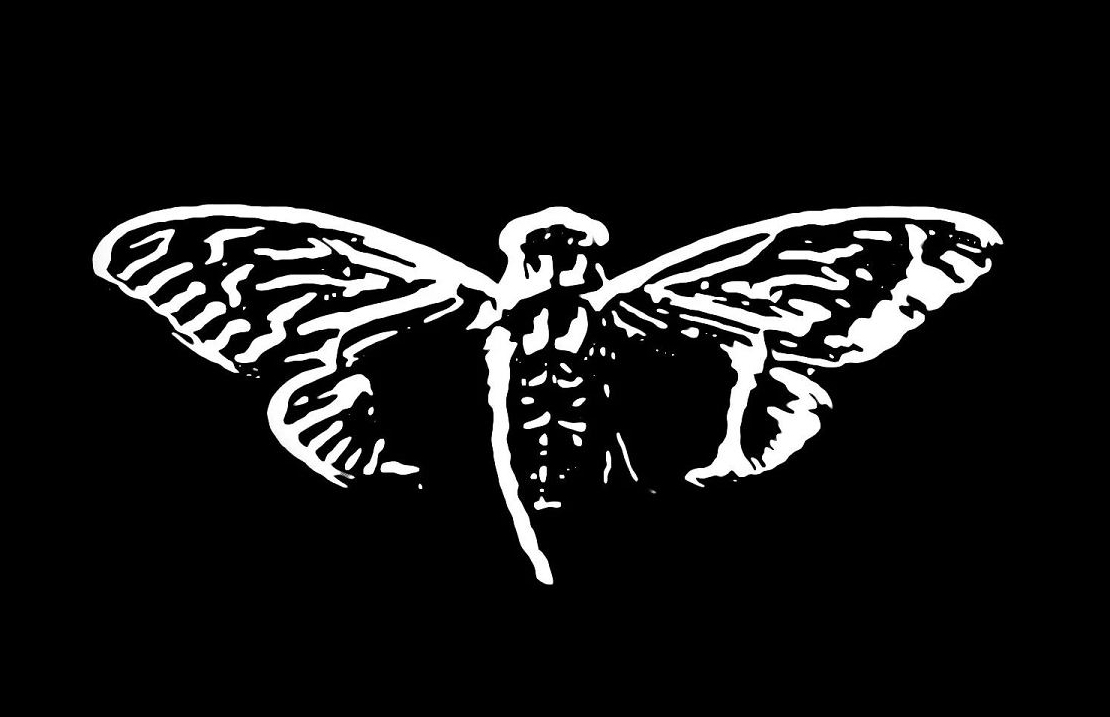 Cicada 3301 – a mysterious organisation with a global reach. It became known in early 2012 through a picture posted on 4chan with a cryptic message:

"Hello. We are looking for highly intelligent individuals. To find them, we have devised a test. There is a message hidden in this image. Find it and it will lead you on the road to finding us. We look forward to meeting the few who will make it all the way through. Good Luck. 3301”.

Users who succeeded in solving a puzzle were presented with a new one and each task was more and more difficult. Puzzles featured prime numbers, Mayan numerals, the hexadecimal number system, literature, poetry and philosophy. Later on Cicada posters appeared in numerous cities across the world. The QR code they contained redirected to another puzzle. Since 2014 Cicada 3301 content has seen a decrease, but many still try to decipher old riddles.

Although the challenges were schematic, the level of difficulty was high. All of the three missions the people got from Ciscada 3301 were divided into five parts:

Cicada 3301’s recruitment process resembles the Bletchley Park story from 1942. A crossword printed in The Daily Telegraph in 1942 helped find candidates for Alan Turing’s code-breaking project. Those who were able to solve the puzzle were offered a job in Bletchley Park which involved deciphering Enigma device used by the Nazis in WW2.

Organisations that recruit members in unusual ways usually stimulate the imagination. Cicada 3301 has been perceived as an elite group searching for few „highly intelligent individuals” – any person reading their ad was intrigued and wondered if they could be the one to solve the puzzle. The first line of the original message already grabbed the attention of the public, which enjoys conspiracy theories about secret organisations. 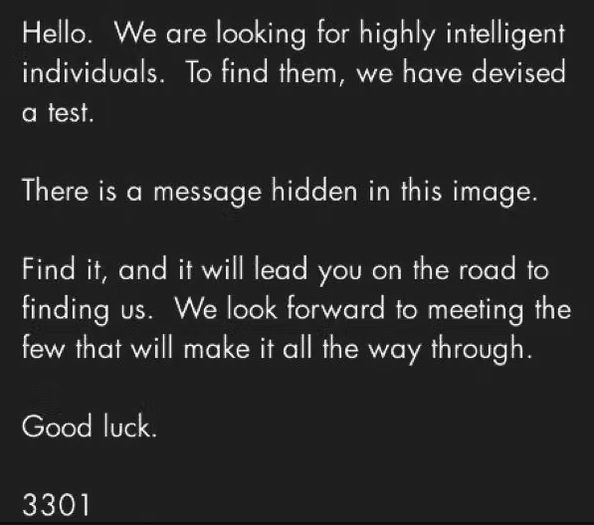 Part of the attraction of the Cicada 3301 project was its origins in anonymous 4chan message boards. 4chan is known to be the hotbed of interesting Internet phenomena, including the Anonymous hacker group. While a lot of its content might be seen as disturbing or alarming, it is important to follow its trends for Internet-savvy people.

As soon as Cicada 3301 made its appearance on 4chan, it became a must-watch project for many. In addition to that, the third puzzle was hosted on the Tor network server, which is known to be even grimmer than 4chan discussion boards. Cicada 3301 seemed to go more and more underground with every task.

Cicada 3301 plays on the concepts of taboo, occult and disturbing reglious associations. It referred to artistic and philosophical works, including those of Aleister Crowley, an English occultist, William Blake, an English painter and writer, or Ralph Waldo Emerson, an American philosopher, as well as Mayan numerals and undeciphered Anglo-Saxon runes.

Cicada 3301 has captured the attention of some academics, who have studied the project as a possible cyber-sect, or some sort of an online form of spiritual expression. The belief is reinforced by the story of a Cicada 3301 recruit, who recalls a warning sent by an ex-member of the organisation. He referred to it as a “religion disguised as a progressive scientific organization.” 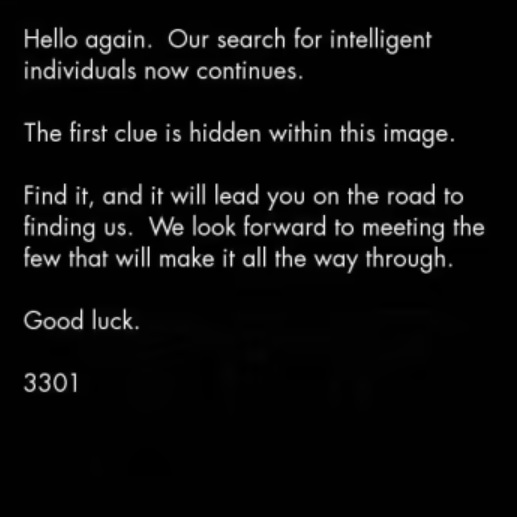 Apart from pseudo-religious associations, Cicada 3301 resembles the Anonymous hacker group. According to the Leaked Email, Cicada 3301’s ideology was: „liberty, privacy, security.” Some interpreted Cicada 3301 as a group providing support for whistleblowers. This idea again might seem fascinating to many, as people like Julian Assange or Edward Snowden have become prominent public figures and information related to such individuals tends to spread quickly. People have enjoyed pirate stories for hundreds of years and some consider rebellious whistleblowers to be their modern version. 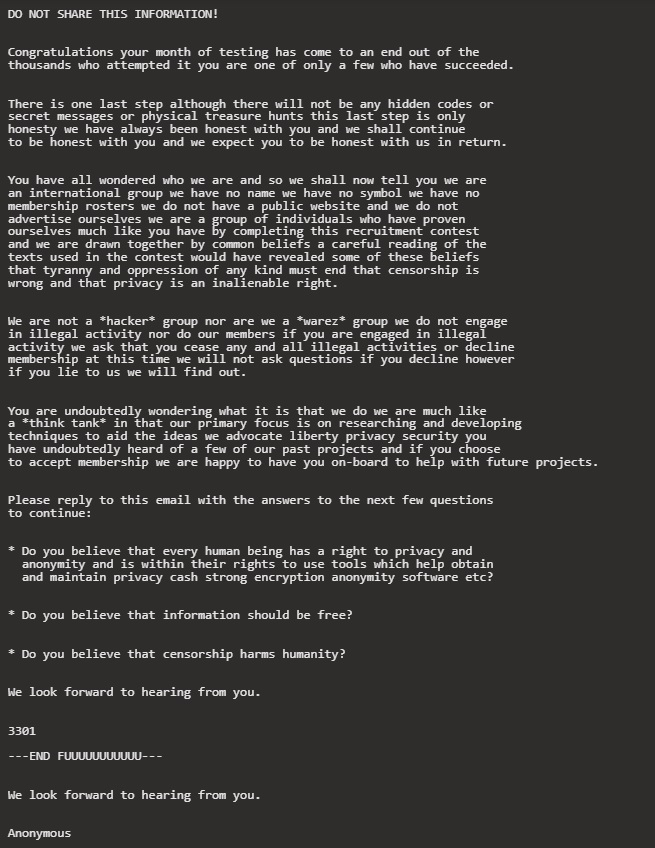 Cicada 3301 has been covered globally, part of the reason behind that being the fact that the posters with QR codes also appeared in various locations across the globe.

At the peak of Cicada 3301’s popularity it was covered by many media outlets, including the BBC, the Guardian, Financial Times, the Washington Post, and others.

With each new edition (all three of them) it also sparked interest among Internet communities, especially on 4chan, Twitter and Reddit, later on also Discord. 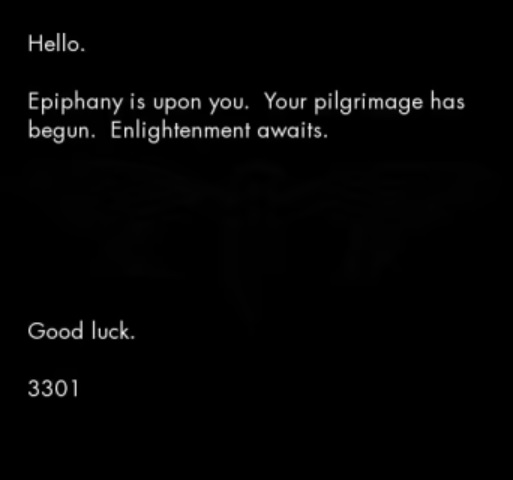 Cicada 3301 first became known through discussion boards that serve as strong Internet communities. Soon the mysterious puzzle enthusiasts started forming online communities of people solving the challenges, including the Uncovering Cicada Wiki or the r/cicada. Videos explaining the phenomenon are also still very popular on YouTube (one such video has 27 million views as of March 2022).

Cicada 3301 story is appealing because of its loose ends. Recruits who have shared their personal accounts tend to conclude that their mission was stopped at some point, but there were still other processes at work behind their scope of knowledge. This leaves the question open if Cicada 3301 is indeed a spy recruitment programme, a PR stunt, a hacker group or a mystical secret organisation. Those, who cracked the code (and Cicada 3301 confirmed such people do exist), have never spoken about the final outcome. 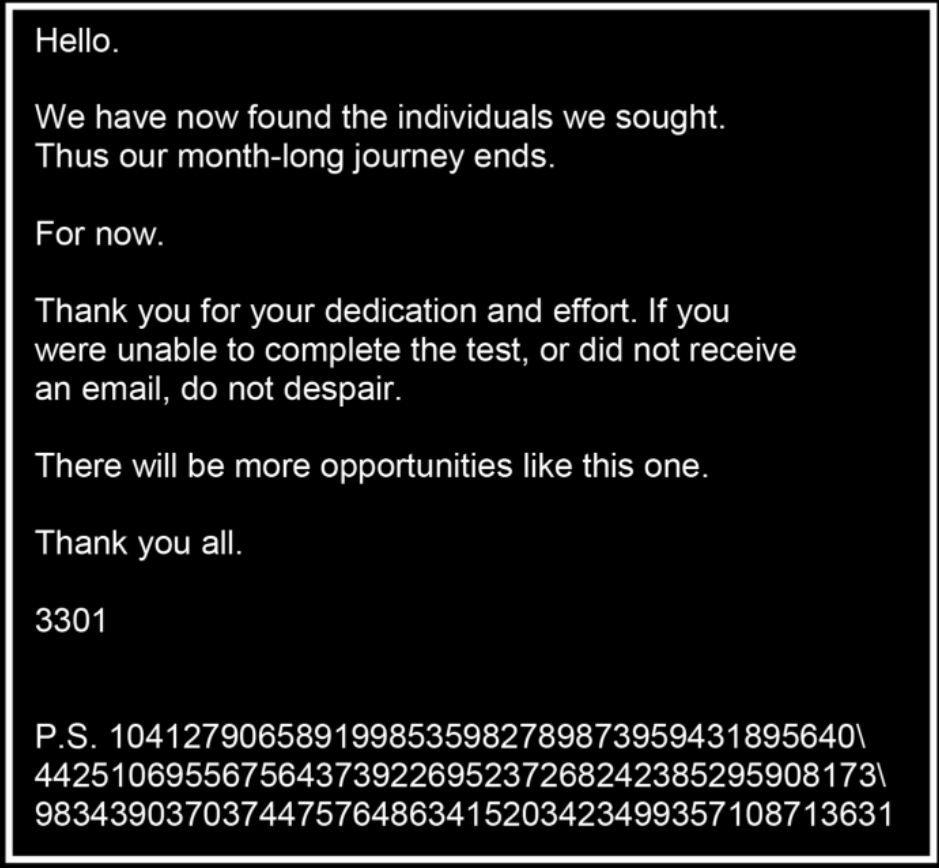 Cicada 3301 remains unsolved to the general public. However, the possibility of finding out who is behind the mysterious project seems exciting to many people following it. While some try to rationalise that it could be a PR stunt or an unusual recruitment process for a tech giant, other people tend to believe grander ideas, such as espionage, Illuminati or freemason conspiracy theories.

Nobody knows how many people have successfully solved the challenges, but people tend to believe there are many of them and they deliberately chose to remain anonymous. In fact most of the Cicada 3301 followers believe in the invisible group of the successful ones more than in the testimonies of „failed” recruits.

Cicada 3301 was generating a lot of interest between 2012 and 2014, and it is still an outstanding example of a successful viral Internet puzzle. Other organisations follow and create Cicada-style puzzles that tend to also go viral.

The United States Navy created a similar puzzle in order to recruit young cryptographers and the National Security Agency had a similar idea. These examples show that creating a mystery helps grab people’s attention and makes joining the seemingly secret organisation more appealing than it might actually be.