GameStop - a video game retailer with over 5,500 stores in the US, Canada, Australia, New Zealand, and Europe that has been experiencing heavy financial losses since 2018 while the market shifted towards buying digital versions of games. This has made GameStop’s stocks one of the hedge funds’ favorites to short sell

r/WallStreetBets - a Reddit community known for its high-risk approach to trading. They often refer to stock markets as casinos, believing that the system is broken, and it has lost its connection to the real world. According to this community, trading is just gambling on a set of numbers with fancy labels

The mechanism which has been used by r/WallStreetBets is commonly seen on stock markets. Once too many bets are put against price drops, getting close to the overall market value, the short positions become vulnerable.

Reddit users exploited that and began to collectively buy GameStop’s (and a few other) shares which led to pumping the prices higher. Some hedge funds on short positions eventually had to sell the shares at a loss, driving the price even higher.

How the GameStop short squeeze happened? Having the right cause

Short squeezing on GameStop shares and influencing the prices of a few other companies is a form of protest against the state of today’s economy. The idea builds on the fact that large capitals have enough power to impact stock prices to the disadvantage of retail traders. Although short-sellers are disliked on the market, they also play a role in signaling bad investments–this doesn’t appeal to the group of traders who joined in 2020.

What’s appealing is that a group of individuals can shake things up and do harm to powerful hedge funds managing billions. It’s interesting that even though some community members could become millionaires due to that campaign, they still hold the stocks for the cause.

r/WallStreetBets community has grown organically for over 7 years, but it wasn’t an overnight success. It reached 100k members after 5 years of existence and went to 1 million due to market conditions and rising interest of millennials in trading.

That 1M of engaged members was enough to shake things up, though. They effectively followed and spread an idea to play in the ‘stocks casino’ against the big guys. After they succeeded and made to mainstream media across the globe, the member count skyrocketed to over 6M in just a few days.

Not everyone who supported the cause saw it on Reddit. Some have spotted the trend and contributed to the price pumping, although they have done it for their own interests. That worked for them, too!

Was Gamestop stop scandal a coincidence?

Although often understated, you have to have some luck. Sparking action out of a protest was one but seeing a fellow community member making 7 figures out of 5 is what really fuelled the growth of r/WallStreetBets and GME stock price. 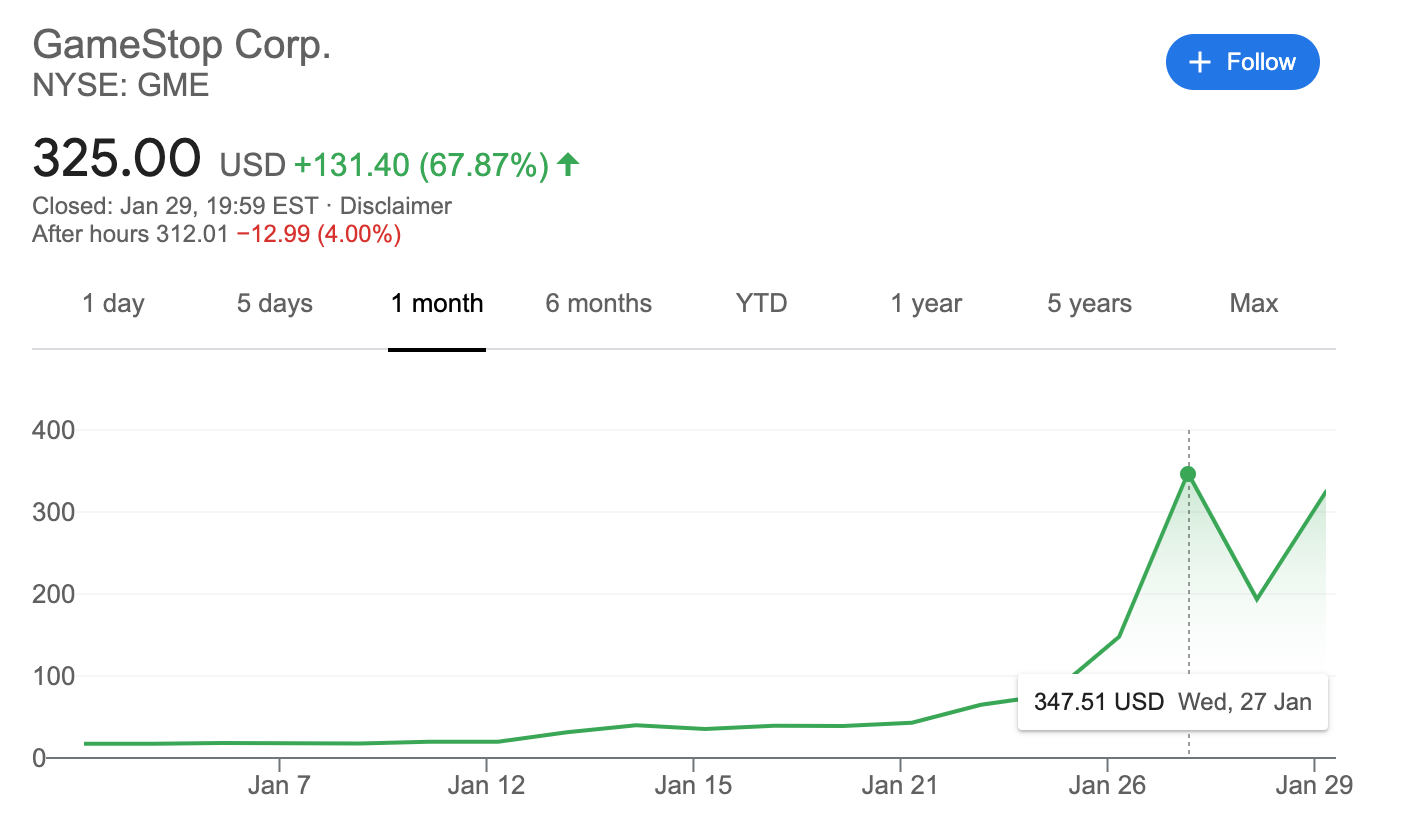 The psychology of protest / Underdog Effect
Researchers have identified the reasons why people form to protest or simply support a cause.

First, there’s a need for efficacy as the one’s belief that they can change their lives through protesting. Identifying with r/WallStreetBets community was also a factor by which more people invested in GameStop. The cause needs to spark emotions, too. Checked. People were angry about the disproportion of what institutional traders can do compared to retail ones. The last factor is the fact that Reddit allowed users to discuss the idea, turning individual emotions into shared community-wide.

FOMO
The Fear Of Missing Out is common behavior on global stocks. Once the trend starts picking up, more and more people want to make gains on it and join as quickly as they can. This is what kept fueling the price rally of GameStop and other targeted companies

Social proof
The reason why the community is growing might be also in the social proof. For some member traders, the bets published in r/WallStreetBets thread brought significant gains, especially that they often invest ‘disposable’ amounts of money. Seeing the success of others brings new members to the community.

Social proof was what made GameStop stocks skyrocket, especially the one posted by DeepFuckingValue, known as Keith Gill in the real life, and as Roaring Kitty on YouTube where he explains his investment philosophy. This trader kept investing in GameStop since 2019 as he thought the company is undervalued compared to the business it does. After the price rally, his $53k turned into overt $30M!

Everyone wants to get rich quick which is why the community rose from 2 to over 6 million over 4 days. The posting by Keith Gill was a dream of beginner investors come true which is why more and more joined and wanted to repeat what he did after they’d seen that it’s possible.

Herd behavior
Herd behavior is often linked to forming speculative bubbles. People mimic what everyone’s doing to follow the general consensus. That was present both on the market, and on Reddit when the campaign was planned.

Recency bias
Those who used GME price trends for their own gains could also be biased by recency bias. In simple words - that means that once they’ve seen the growth, they expected it to continue.

You don’t want to be in the Robinhood’s shoes when something like the situation above occurs. The app that made trading commission-free blocked retail investors from buying what they wanted–at least this is how the Reddit community saw this move. It looked like a market manipulation, and you could easily see the price drop shortly after announcing that.

The r/WallStreetBets community believed that it was to protect the Wall Street and the hedge funds from extreme losses which made them to fight even harder. The rage was further fuelled by Google removing over 100k of negative app reviews. There’s even a protest outsite of Robinhood’s HQ!

Robinhood's decision was explained as that the company has "net capital obligations and clearinghouse deposits" with the SEC, which fluctuate based on market volatility. Even if that’s the case, the internet might not forget and the PR crisis communication plan could’ve been better. 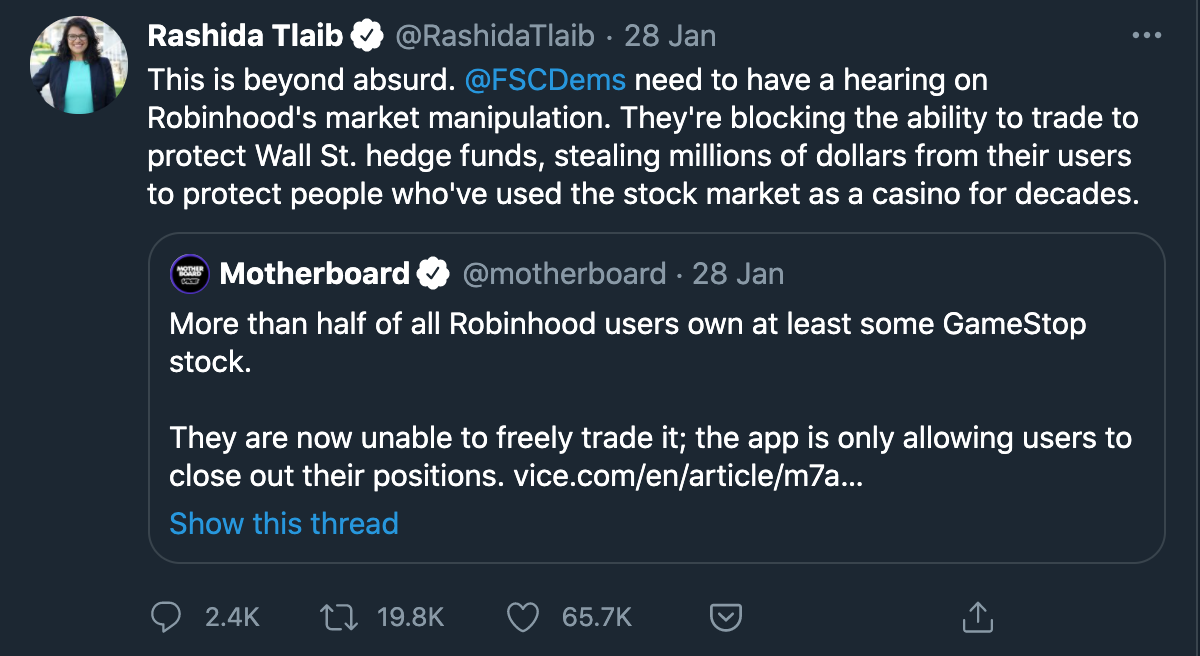 Marketing is basically spreading ideas and if so, there’s quite a lot to learn here but if there’s one, the most important is this - build a community around your idea, product, or brand. In business, it doesn’t have to have millions of members but an engaged group that has a sense of belonging is the start towards a larger influence. And don’t forget the cause!

For r/WallStreetBets, that was making a collaborative effort towards impacting the stock price. For you, it might be forming a movement within your industry or building a community of delighted users that help each other and promote what you have to offer for free. If you’re into inbound marketing, you definitely want to achieve that!