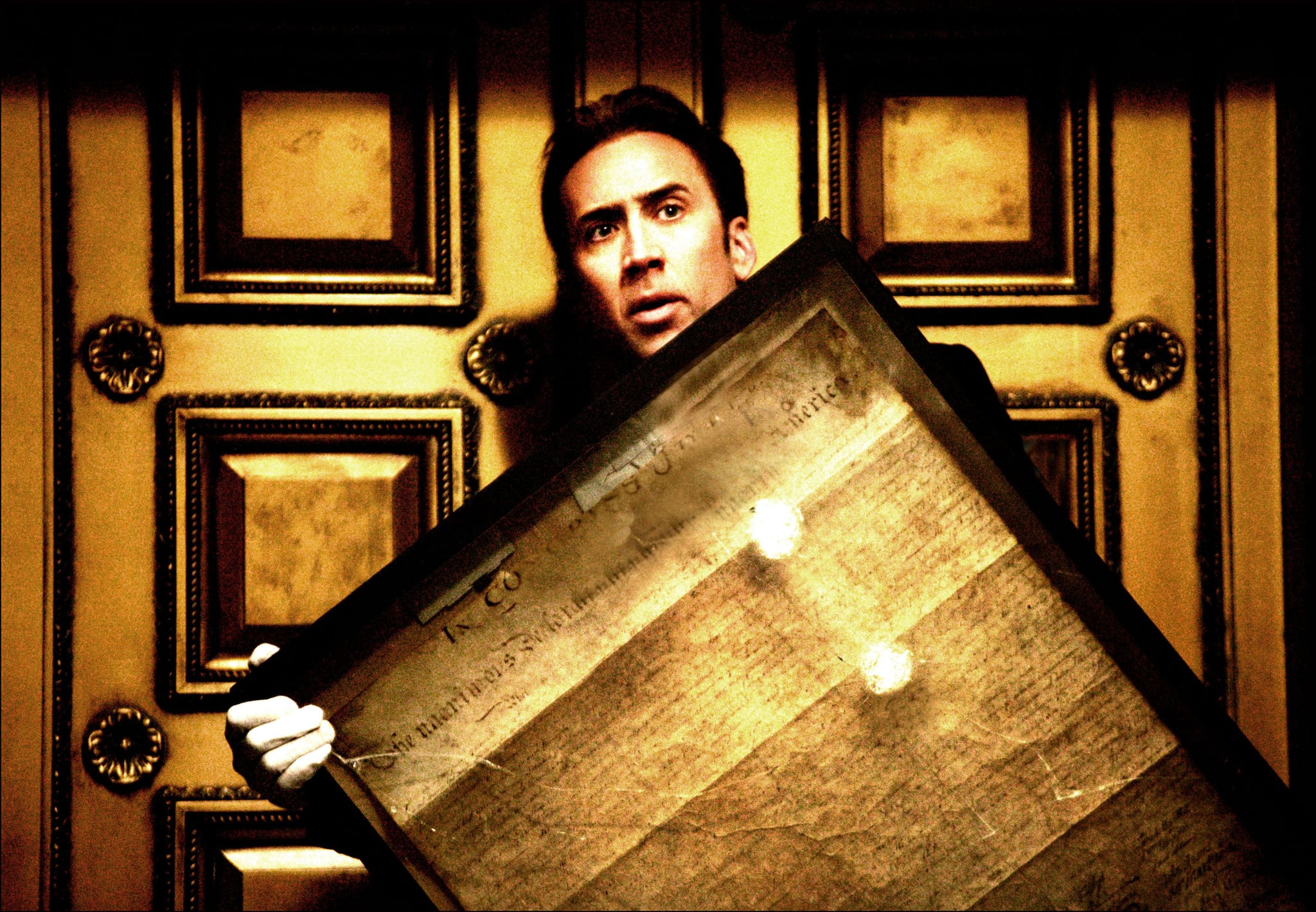 ConstitutionDAO – a DAO (Decentralized Autonomous Organization) aiming to crowdfund money in order to purchase a rare copy of the American constitution, auctioned by Sotheby’s.

The group’s organizers managed to collect more than $40 million in one week, but did not succeed in winning the bid. The outbid investors all paid for their share in the historic document with cryptocurrencies, in this case Ehtereum.

Since the project failed, the group has dissolved and the organizers are in the process of returning the digital funds back to the shareholders. ConstitutionDAO operated in November 2021. 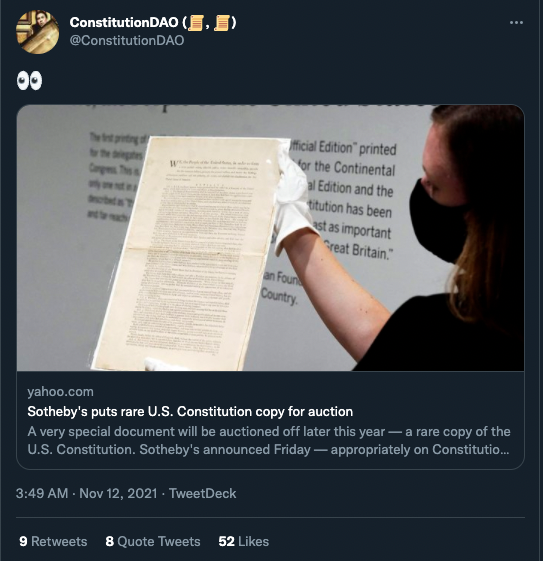 DAO is the abbreviation from “Decentralized Autonomous Organization”, which means a kind of organization governed by the rules encoded as a computer program, and ConstitutionDAO was a specific DAO, created experimentally in 2021 to buy a US constitution copy through an auction.

How did ConstitutionDAO start?

The first signs of the project were visible in November 2021, when the first tweet appeared on the official ConstitutionDAO Twitter profile. However, the idea must have been around for some time then, as Austin Cane, one of the project's core contributors, had already posted mysterious tweets before that. The crowdfunding phase started on November 15th.

At first, it was thought to be some DAO meme, a joke, but it soon became serious and the community got really engaged in the whole event of bidding the copy of the US constitution.

The people behind ConstitutionDAO were relatively established figures in the cryptocurrency and Web3 community.

For instance, Julian Weisser, one of the core contributors, as of 17 August 2021 had more than 7,000 Twitter followers, which apparently might be enough to kickstart a crowdfunding crypto project.

When other core contributors, also crypto native, and their networks are added to the equation, a number of cryptocurrency enthusiasts is big enough to make a significant change in promoting a new exciting endeavor like ConstitutionDAO.

As almost every project nowadays, ConstitutionDAO was very prominent in social media. Its origins reach back to Twitter discussions, and once the project was unveiled, it gained more and more momentum on social platforms.

Its Discord grew to attract nearly 20,000 members in just one week. The major force behind the enterprise though seems to be Twitter – where it all started and where the updates were presented to the wider public.

Memes, especially those related to the Nicholas Cage character in the movie “National Treasure”, went viral across Twitter and other platforms within the crypto community. The famous actor is also used as a profile picture on social platforms and his long track of meme popularity could have contributed to the publicity of the endeavor.

The last aspect of this prominent social media presence is a dedicated emoji consisting of two scrolls of paper separated by a comma and put into brackets: (

). It is a reference to (3, 3), a cryptocurrency community inside joke, but for ConstitutionDAO it turned out to be a distinctive social media feature. 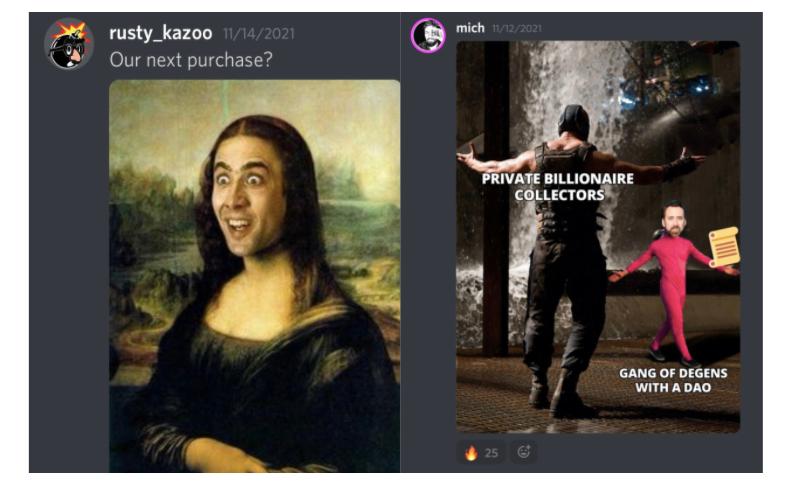 ConstitutionDAO used direct cues to generate interest in the project, and in the US constitution auction. For instance, in their social media profiles, the core contributors (the closest to the government body of any DAO) were openly asking for retweets and shares. 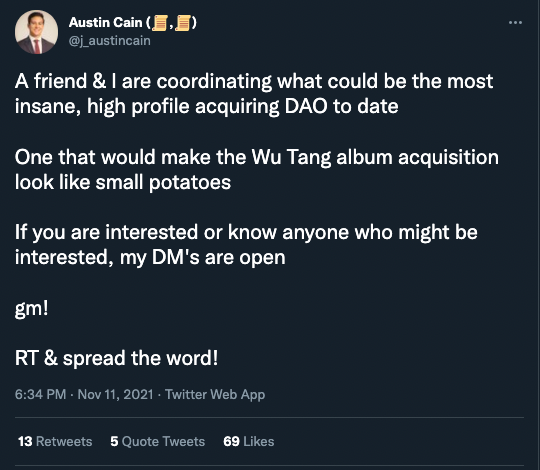 ConstitutionDAO reached out to people with Ethereum wallets, but also to other people who were passionate about civic movements and American history. For the latter, who have never used blockchain technology, Jonah Erlich, a core contributor at ConstitutionDAO, created a step-by-step video guide to help them join the crowdfunding for the constitution auction. As a result, a median donation to ConstitutionDAO was $206.26.

The project was keen to communicate clearly its progress (and success) in raising money for the Sotheby’s copy of the constitution auction. As of Monday through Wednesday the progress went as follows: 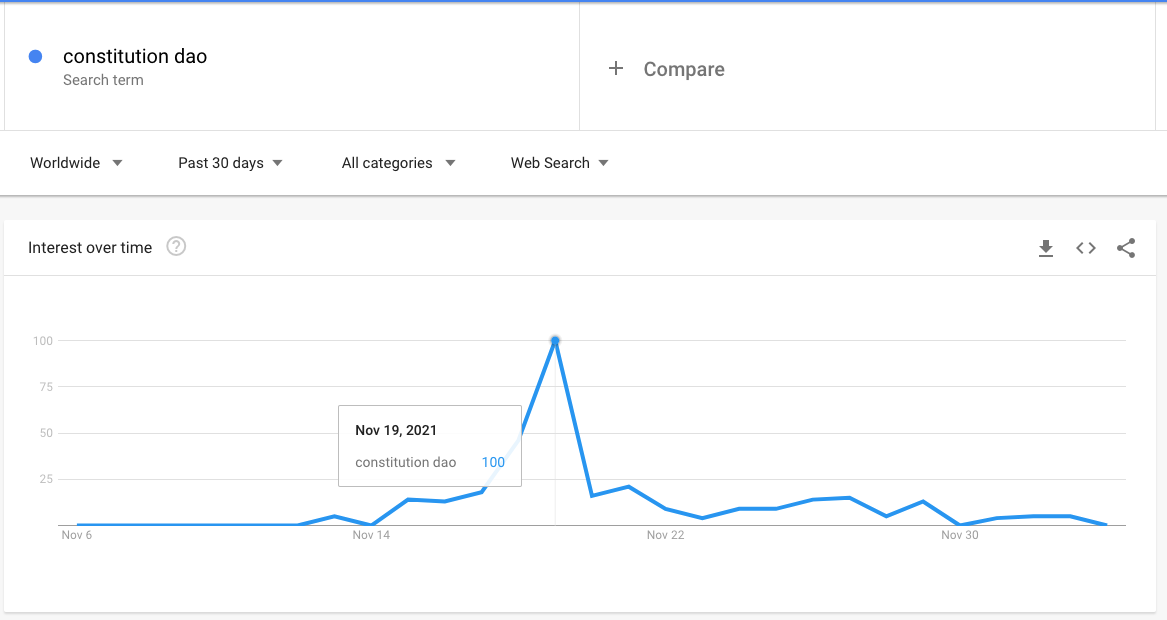 Playing on the Democracy

Appealing to the notion of America as the land of the free and the idea of participatory democracy in the times when democracy is said to be in decline, is an effective tool. The opening lines of the US constitution “We the People…” have been used to attract a diverse group of people. As it happened, it was very good publicity to share messages of support from people of color, immigrants or other people who were emotional about participating in the project.

The project failed, and they didn't win the constitution auction, but ConstitutionDAO is doing its best to market it as a success in other dimensions. Their message stresses its educational aspect (teaching people, especially in the arts, about cryptocurrencies and DAOs as a form of investment) and shifting paradigms.

ConstitutionDAO without a doubt attracted public interest and one can argue that Elon Musk’s brother, who happens to be launching his own DAO, is using this moment to promote his own project, of course supported by his brother. This shows that the concept of DAO is now part of the mainstream discourse, even though the bid for the constitution was actually won by a TradFi (traditional finance) representative, Ken Griffin, it helped promote crypto and Web3.

How much money did ConstitutionDAO rise?

ConstitutionDAO raised about $47 million in total through the crowdfunding. Their pool rose drastically, as it took them only about a day and a half to raise $27 million. All the funds were raised in Ethereum

Although the project rather didn’t search actively for press endorsements, it quickly became cited in tech and other large media outlets which put it in the spotlight while the crowdfunding was still on.

We put in favor our group to others. The concept of buying out the last available paper constitution and returning it to the people managed to grab the attention of over 17,000 people.

The majority of the investors have never met, even virtually, but believed in the common goal. The prevailing mood, which can be observed in memes posted by them, was that of fun, patriotism and a feeling of participating in a history-making project.

The idea gained a lot of popularity due to its insightfulness, novelty and simplicity at the same time. The more often it appeared in the public discourse, the more attainable it became, which partly explains why ConstitutionDAO gained so much momentum in just a week.

Similarly enough, the more people learned about ConstitutionDAO, the more they brought in to the project. This is represented by the fundraised numbers – it took two days to get to $5M, but then $35M was raised over a course of a day.

The closer we are to finishing a task or a project, the more we are motivated to do so. This also tells us why the bigger the numbers were, the more people felt like they should participate, as actually buying the constitution seemed attainable.

Calling donors friends (styled as: frends), using a strong network of crypto people and establishing a connection with outsiders, who cheered on the project for its anti-establishment character, proved to be a successful strategy.

To add credibility, members of the DAO confirmed that they were serious about the project by tweeting that they were “in touch with institutions like the @smithsonian(19)  and @nypl(20), and have support from @TheNMF(21) to preserve this "treasure”.

ConstitutionDAO has been a very simple landing page. It contained a brief outline and no spare elements that could distract the donors. The message was clear and stated in a straightforward manner – "to put the constitution in the hands of the people".

The ConstitutionDAO media presence was impressive and it became a hot topic, which attracted public attention. Through memes it became attainable to non-crypto people who wanted to be part of the discourse. This led to the group belief that the project was deemed to succeed and the chaos of disbelief on social media once the bid was actually lost.

Beginners overestimate their abilities. People behind ConsitutionDAO were well-meaning but incompetent when it came to taking care of the paper copy of a precious document, ownership arrangements and the auction process itself. It was apparently confirmed by one of the organizers in the Discord channel.

ConstitutionDAO didn’t reach the goal but it did well for another one – it showcased the power of crypto, blockchain, and Web3 overall to a general public. Thanks to the technology, complete strangers could form a company, raise enough capital to compete with professional investors, and almost succeed on the US constitution auction.

This can be inspiring to anyone with a product. Go do something with it that can make it go viral, but on a second layer, make it deeply about the product’s features and benefits. This gives you a chance for a lot of press coverage that has the actual potential of influencing the readers.