De Beers – a world-famous diamond monopoly. For decades, they have controlled over 90% of the supply, as well as managed demand, engraving the gem in our society with clever marketing. Diamond’s high prices? Engagement rings? That’s all them.

Who are De Beers?

De Beers is the largest diamond-producing company in the world. They're involved as well in mining, as in the whole marketing of diamonds since 1888.

The name comes from the surname of the two brothers: Nicholas and Diederik.

After Oppenheimer took over De Beers, and the Central Selling Organisation, he signed contracts with both suppliers and buyers, effectively enabling De Beers to control any trade related to diamonds. Literally.

That position was maintained for much of the 20th century.

Managing the supply – the scarcity

De Beers controlled all the trade and mining, but the amount of diamonds they could produce were endless. In order to keep the demand high, the company used their position to limit the supply.

Their subsidiary would buy the diamonds and De Beers set the prices and the amount of diamonds they wanted to sell for the whole year. To maintain businesses of producers, all of them got a cut of the sales. Then, buyers took those diamonds to Antwerp and New York, to further sell them.

A diamond engagement ring was not so common before the 1930s. Only a few Americans engaged then with diamond rings. All that was created by innovative advertising from De Beers and N.W. Ayer.

The idea was to show men that diamonds are the ultimate symbol of romance, but also of their personal and professional success. Women had to perceive diamonds as the only way to engage. That was basically selling ideas to the public – not a product or a company’s brand.

Technically, De Beers didn’t invent the diamond engagement ring and that was a trend even before, but the diamonds bought were small and of low quality. De Beers made the trend skyrocket and guide it to higher spending.

The advertising campaign proposed by N.W. Ayer spread the idea in a few ways. First, they created the sense that all celebrities are wearing diamonds. They created a „Hollywood Personalities” service which described what diamonds are worn by movie stars and sent it to 125 leading newspapers. They could then feature some of them in the respective column.

N.W. Ayer used a similar approach as of today’s content marketing – they created stories that the target audience engaged with.

One tactic was to pay movie producers to emphasize diamonds in movies and film proposals with diamond rings, engraving them as a symbol of romance.

Another idea was to make portraits of „engaged socialites”, so the lower-middle class had „role models” to follow. Girls would want to have a life like the stars – and the rings, like they are. The stories emphasized the size of the diamonds, linking the size of the diamond with how much a man loves a woman, or to his status. Therefore, men wanted to propose with as large diamonds as they could afford.

Even before the campaign took off, some fashion designers were discussing on radio programs that there’s a trend towards diamonds. A trend that was about to happen, but from De Beers incentive.

All that injected the idea of a diamond engagement ring into the whole American society. Once that was done, it was hard to stop it. 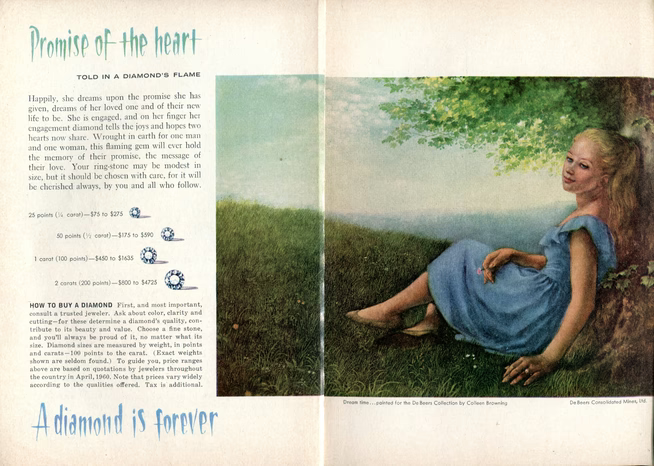 „A Diamond Is Forever” slogan

Somewhere in 1947, the agency created a „A Diamond Is Forever” slogan which later became the company’s official motto.

This slogan was another way to sell diamonds as a symbol of an everlasting love. However, it intriguingly addressed one of the problems with diamonds – the resale value. De Beers controlled all the primary market, but they couldn’t do that when someone decided to resell them. That led to fluctuating prices. Even today, you’ll rarely get what you paid for.

However, you won’t ever find about it if you never try to sell your diamonds. „A Diamond Is Forever” campaign therefore passed the idea that you’re buying diamonds once and keep them for future generations. This way, the perceived value will remain high.

Playing for the long-term

Many of the advertising tactics were designed for decades.

One strategy put by N.W. Ayer was to organize lectures in high schools across the whole country. Lecturers would come to classes and tell about diamond engagement rings, which could be largely discussed by girls in private informal meetings. They might not plan to engage in high school, but they were already exposed to what would they want to get for a ring.

Once the demand for engagement rings was established, other ideas were shared. One was the „right-hand ring” for women to show their independence. Another was „eternity ring”, given for a wedding anniversary. Some ideas were unsuccessful – like the diamond ring for men – but many have sticked, and stayed.

After setting up US diamond demand, De Beers moved to other markets. A notable example comes from Japan. Before 1960s, less than 5% Japanese women received diamond engagement rings as the rooted tradition was deeply engraved in the society.

However, De Beers promoted diamond rings as the token of modern Western values. After over a decade of a campaign (1967–1981), over 60% of Japanese women received diamond engagement rings. Japan became the second-largest market for De Beers and turned into a billion-dollar-a-year market.

When large diamond mines were set up in Siberia in the 1950s, they became a threat to De Beers imperium. However, with their position, they could offer to buy everything that came out of Siberia, establishing a worldwide single channel of supply and a partnership between Da Beers and the USSR.

Whenever new mines were established around the world and whose owners didn’t want to participate in the „single channel” – like in Zaire or Israel – De Beers would issue stockpiles of diamonds similar to the owner’s product, driving the demand down.

Later, that single channel approach was disassembled as Russia, China, and Australia refused to participate.

To maintain their monopoly in the diamond industry and keep the demand on a certain level, De Beers stopped at nothing, including breaking the law.

Apart from the price fixing issues, there are allegations of kidnappings, and even killings. Everything only to stay in their privileged place.

In 1994 De Beers were accused of fixing the price of the industrial diamonds, which was a violation of the Sherman Antitrust Act. Moreover, it was claimed that General Electric, another large diamond tycoon, cooperated with the De Beers in the whole price fixing dealings.

Scarce items are more valuable, however the scarcity can be only a perception. This was the case for De Beers diamonds’ purposefully limited supply.

Exposure to tiny signals around us can subconsciously affect our behavior. No one was told directly „go buy diamonds”, but they did. Mainly because of all the little messages in movies or newspapers. That’s why the diamond engaging ring got popular.

The more we see a thing, the more we trust it. Frequent exposure to diamond-related stories and materials convinced people that they are a part of their culture.

When in doubt, we follow the actions of other people. With the early advertising of De Beers, they showed the stories of movie stars that already had diamond jewellery. This was a proof that they are the trend to follow.

People prefer and better remember stories than facts alone. The diamonds were largely advertised with a consequent story that helped to engrave the ideas created by N.W. Ayer in whole societies.

It’s obvious that monopolies can control the market, but De Beers did it in an extremely effective way through controlling the supply, prices, and advertising. With the “diamond is forever” slogan, this company injected an idea into entire communities and made it stay.

What’s the most striking is the consistency and long-term thinking. Today, we want quick results and can think of a year-lasting campaign as long-term. De Beers invested in campaigns with consistent messaging for decades and this is what allowed them to build this huge business that lasts for over a century.

Just think about that in your business’ or product’s context.